Yen and Swiss Franc ended as the strongest ones last week. They’re partly supported by lack of clear indication of imminent easing from respective central banks. There was additional buying on a pessimistic turn on US-China trade talks. Dollar ended mixed after Fed’s hawkish rate cut. Theorectically, Fed should be done with its mid-cycle adjustment. But the path ahead is still heavily dependent on developments on trade, global slowdown and domestic data.

On the other hand, New Zealand and Australian Dollar were the weakest ones. In particular, job data in Australia affirmed the case for another RBA rate cut, probably next month. Sterling was the next weakest after it pared back some of recent gains, reduced no-deal Brexit risk.

It originally appeared that the deputy-level US-China trade talks in Washington went well last week, with both countries announcing some tariffs exemptions too. Hope for an “interim” trade deal was raised by announcement the the China team would visit some US farms next week, probably paving way for some purchases.

However, just before Friday’s close, US President Donald Trump told reports that he’s looking for a “complete deal”, not a “partial deal”. He added that he didn’t need trade agreement with China to happen before the 2020 presidential election. Hours later, the Chinese officials announced to cut short their trip and cancelled the visit to farms in Montana and Nebraska.

Additionally, it’s reported that the trade war has now turned into a political and ideological battle between the two superpower, rather than just tariffs and imbalances. During the meeting, Chinese delegation brought no new proposals on core issues of intellectual property protections, forced technology transfers, industrial subsidies and other trade barriers. The conflicts could take much longer to resolve.

There were lots of central bank activities last week. Markets were somewhat disappointed by the lack of overwhelming dovishness from BoJ and SNB. Thus, both Yen and Swiss Franc were supported towards the end of the week. BoE’s standing pat also triggered little reactions and focus remained total on Brexit developments. FOMC’s rate cut and economic projections were the most interesting event.

The -25bps cut to 1.75-2.00% in federal funds rate was seen as a “hawkish” cut. Most importantly, both new economic projections and the dot plots suggested Fed was done with its “mid-cycle adjustment”. The median projections of federal funds rate were at 1.9% in 2019 and 2020, then rises to 2.1% in 2021. In the dot plot, 7 members have penciled in another cut to 1.50-1.75% this year. 10 members have penciled in rate between 1.75 and 2.25%. However, the upcoming decisions will remain heavily dependent on developments. Thus, no one could rule of any dovish shifts from the hawks.

As of now, fed funds futures are pricing in 62.9% chance of at least one more -25bps rate cut by the end of the end.

RBA September meeting minutes maintained clear easing bias. Most importantly, the central bank reiterated that the economy “could sustain lower rates of unemployment and underemployment.” Q2 Growth was expected to have been around 0.5%. Then, data from Australia showed unemployment rose 0.1% to 5.3% in August. The development affirmed the case for one more rate cut this year, probably in October. 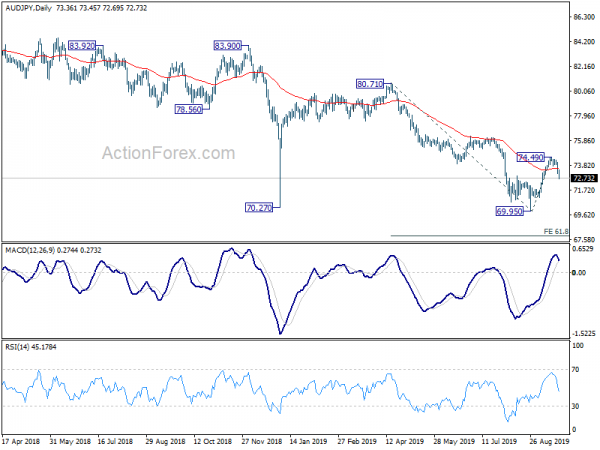 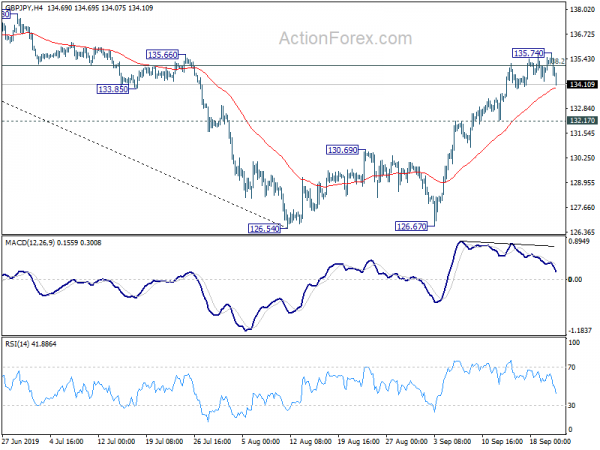 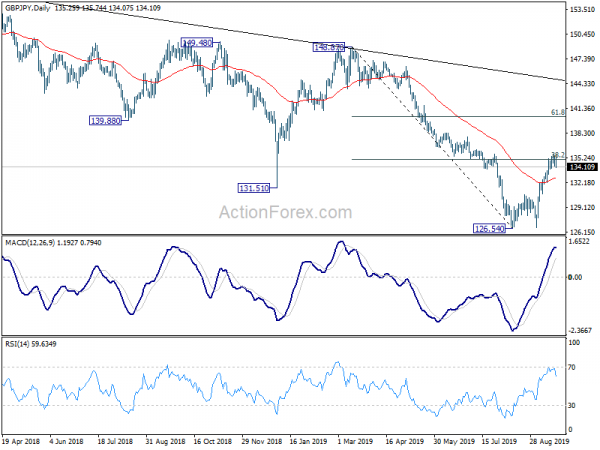 In the longer term picture, for now, we’re treating price actions from 122.75 (2016 low) as a corrective pattern. Hence, strong support could be seen at 122.75 to bring rebound before the pattern completes. However, sustained break will raise the chance of resuming long term down trend from 251.09 (2007 high). 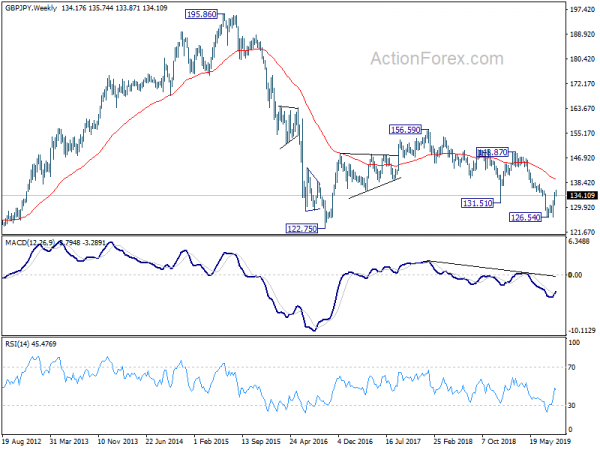 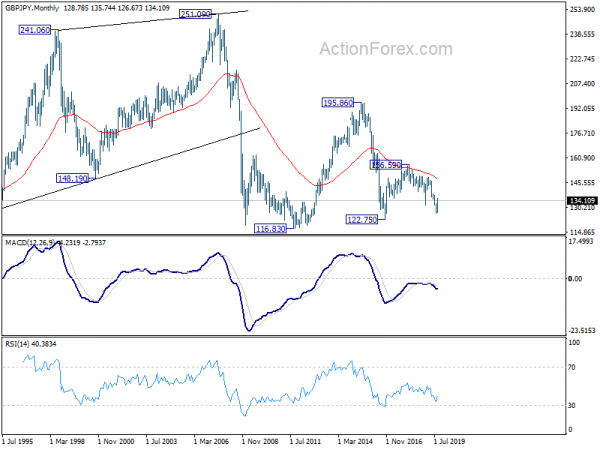