Sterling is attempting to resume recent rally even though there is no clear break through in Brexit negotiations yet. European Council President Donald Tusk said it may take another seven to eight hours before knowing when Brexit may happen. As news and rumors come in, we may seen more commitment from Pound traders. Meanwhile, Dollar shrugs off rather poor retail sales data and trades mixed. Yen continues to pare back some of this week’s losses. Commodity currencies remain the worst performing ones.

Technically, intraday bias in Sterling remains on the upside as long as these levels holds: 1.2655 minor support in GBP/USD, 137.51 minor support tin GBP/JPY, and 0.8716 minor resistance in EUR/GBP. Traders might want to tighten up their stops ahead of any Brexit announcements. AUD/USD continues to spiral downward towards 0.6710 minor support. Break will be the first sign of down trend resumption and target 0.6670 low.

US retail sales dropped -0.3% mom in September, much worse than expectation of 0.3% mom rise. That’s also the first decline in seven months since February. Ex-auto sales dropped -0.1% mom, also worse than expectation of 0.2% mom. Annually, retail sales rose 0.4% yoy over September 2018. Total sales for the July 2019 through September 2019 period were up 4.0% from the same period a year ago.

Irish Prime Minister  Leo Varadkar also said that “we are making progress but there are issues yet to be resolved and hopefully that can be done today.” “But if it’s not, there is still more time. October 31 is still a few weeks away and there is the possibility of an additional summit before that if we need one”.

Separately, RBNZ Deputy Governor Geoff Bascand said in a speech that New Zealand remains vulnerable to external shocks. And, “lower rates still may be needed to achieve our inflation and maximum sustainable employment objectives”. He added that there is reasonable prospect for the cash rate to go lower. 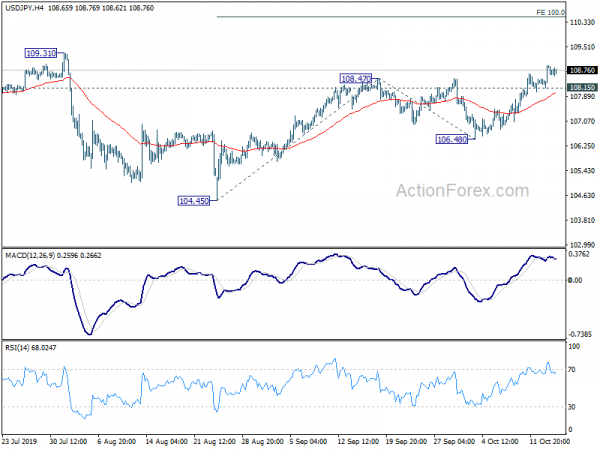 In the bigger picture,strong support was seen from 104.62 again. Yet, there is not confirmation of medium term reversal. Corrective decline from 118.65 (Dec. 2016) could still extend lower. But in that case, we’d expect strong support above 98.97 (2016 low) to contain downside to bring rebound. Meanwhile, on the upside, break of 112.40 key resistance will be a strong sign of start of medium term up trend. 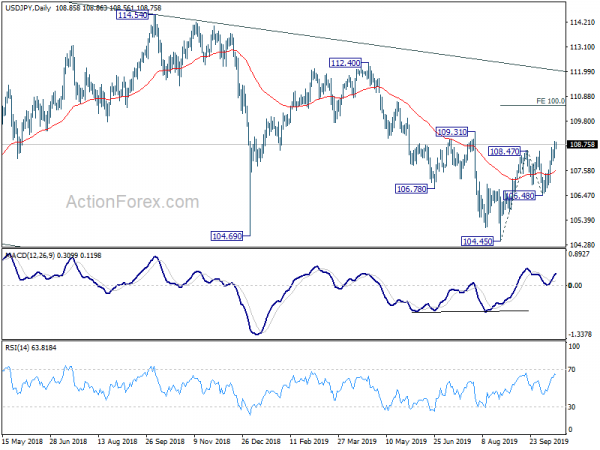