Yen rebounds strongly in early US session on talks that China is pessimistic on US trade deal. But still, at this point, Sterling remains the strongest one for today as lifted by hope of a Conservative win in the upcoming election in December. For now, Euro is also firm after central bank officials talked down chance of recession. On the other hand, commodity currencies are the weakest, as led by Australian Dollar.

Technically, GBP/JPY breached 141.50 support but couldn’t sustain above yet. Decisive break of 141.50 will confirm resumption of whole rise from 126.54. GBP/USD is still heading to 1.3012 resistance and break will also confirm rise resumption. EUR/USD is still held below 1.1073 support turned resistance and near term outlook stays bearish for another fall through 1.0989 temporary low.

China said to be pessimistic on US trade deal

Markets quickly turn cautious on news that Beijing is pessimistic regarding the trade deal phase-one, as US President Donald Trump is unwilling to roll back tariffs. China could opt for a “wait” strategy for Trump’s impeachment inquiry and election. China could also prioritize work on supporting its own economy first.

Bundesbank: Not Likely for slowdown to intensify markedly, no recession in Germany

Bundesbank warned in its monthly report that “the slowdown of the German economy will probably continue in the fourth quarter of 2019:. Though, it emphasized that “it is not likely to intensify markedly”. “As things currently stand, overall economic output could more or less stagnate.” And, “from today’s vantage point, there is no reason to fear that Germany will slide into recession”.

It also noted some tentative signs of stabilization in industrial demand. Meanwhile, domestic economy will continue to provide growth momentum. “Because the labor market is likely to remain fairly robust and wages are expected to grow considerably, households’ income prospects should remain favorable,” it added.

ECB Vasle: Things are under control at the moment

ECB Governing Council member Boštjan Vasle said “I do not see any reason for a further change in growth prospects” of Eurozone. The economy is “developing in a way which was predicted in our latest projections; at the moment things are under control, going in a direction which is not unexpected.”

He added, “we are in a situation where the business cycle is in the late phase, the economic situation is deteriorating and our monetary policy is quite stretched at the moment”. Nevertheless, “if the situation changes, there is still room to go in that direction” of more policy easing.

For now, “it’s been too short of a time to judge the impact since we adapted the package” back in September.

He noted “many market analysts are concerned about the drag on bank profitability that could result from the negative impact of monetary policy accommodation on net interest margins”. And, “net interest margins are indeed under pressure”.

He also said that recession in Eurozone is a very unlikely event. Meanwhile, the central banks won’t reach the limits on the QE program shortly.

USD/JPY struggles to sustain above 4 hour 55 EMA so far and weakens mildly. But it’s staying inside range of 108.24/109.48 and intraday bias remains neutral so far. On the upside, break of 109.48 resistance will resume whole rise from 104.45 and target trend line resistance (now at 111.87). On the downside, break of 108.24 support will revive the case of short term reversal. Intraday bias will be turned back to the downside for 107.88 support to confirm. 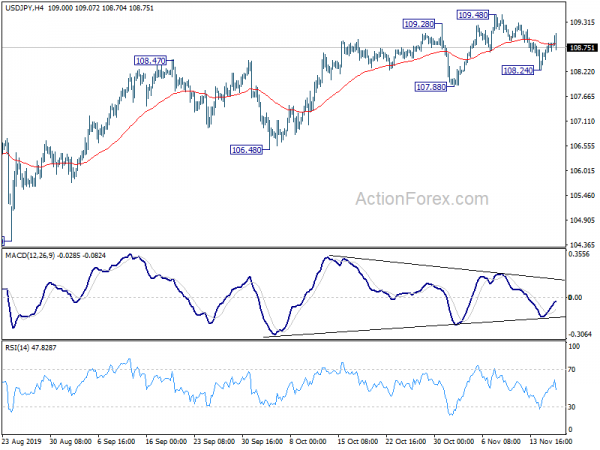 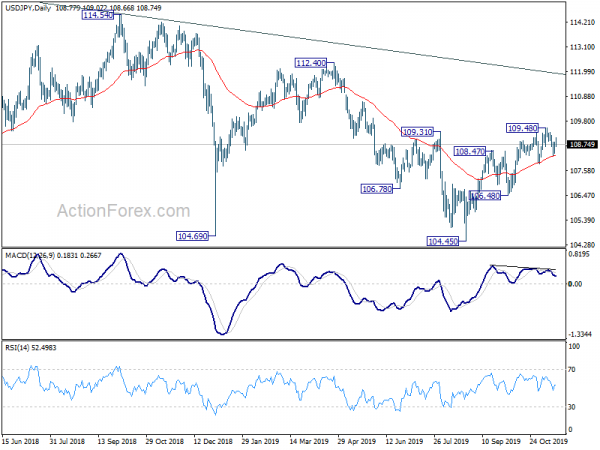