Yen rebounds strongly in Asian session today following steep in decline in China and Hong Kong stocks markets. In particular, the HK HSI is trading down -400 pts, or -1.5% at the time of writing, led by tech titan Tencent and casino stocks. Some attributes the selloff to North Korea’s firing of another ballistic missile just ahead of July 4. That drew response from US President Donald Trump, with his tweet that "hard to believe that South Korea and Japan will put up with this much longer". And Trump tried to shift the spot to China again saying that "perhaps China will put a heavy move on North Korea and end this nonsense once and for all!" USD/JPY is back below 113 after surging to 113.46 overnight following the stronger than expected ISM manufacturing data.

Also from Japan, Prime Minister Shinzo Abe’s advisor Esuro Honda said in a telephone interview last week regarding BoJ that "what’s important, especially this time, is whether we can undertake regime change". And for the next BoJ Governor, "it should be someone who is refreshing enough and can renew people’s impressions with personal charm and sincerity." This is sharp turn from his prior comments that reappointing current BoJ Governor Haruhiko Kuroda after his term ends next April is an option.

Another advisor, former BoJ board member Nobuyuki Nakahara also said earlier this week that BoJ will need "someone who can prepare for" stimulus exit in the next five years. And Kuroda "will fall into inertia and struggle to come up with bold new ideas". There are growing speculations that Kuroda will not be re-appointed.

Aussie tumbles sharply today after RBA left interest rate unchanged at 1.50% as widely expected. The statement is balanced and markets are disappointed that RBA doesn’t turn hawkish like some other global central banks. Policymakers expected that Australian economy would "strengthen gradually". However, they remained concerned over the "subdued" consumption growth, suggesting it reflected "slow growth in real wages and high levels of household debt".

Meanwhile, RBA remained cautious over the property market. As noted in the statement, "in the eastern capital cities, a considerable additional supply of apartments is scheduled to come on stream over the next couple of years. Rent increases are the slowest for two decades". RBA added that "growth in housing debt has outpaced the slow growth in household incomes".

More in RBA Disappointed As It Failed To Hint Rate Hike.

Also from Australian, retail sales rose 0.6% mom in May, above expectation of 0.2% mom.

AUD/JPY possibly in near term reversal 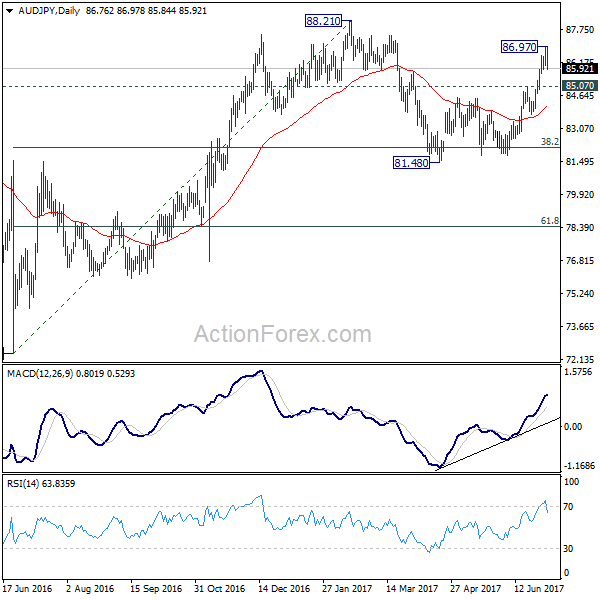 Economic calendar is light today with July 4 holiday in US. UK construction PMI and Eurozone PPI are the main features.

AUD/USD pull back from 0.7711 accelerates to as low as 0.7603 so far. But it’s still staying above 0.7534 support and intraday bias remains neutral first. Another rise is in favor as long as 0.7534 support holds. Above 0.7711 will target 0.7748 resistance and above. At this point, there is no clear sign of range breakout yet. Hence, we’d be cautious on topping again as it approaches medium term fibonacci level at 0.7849. On the downside, break of 0.7534 will indicate near term reversal and turn bias back to the downside for 0.7370 support. 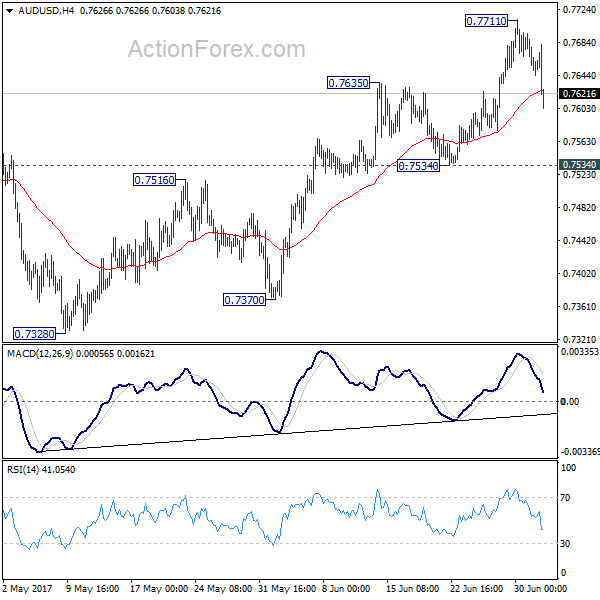 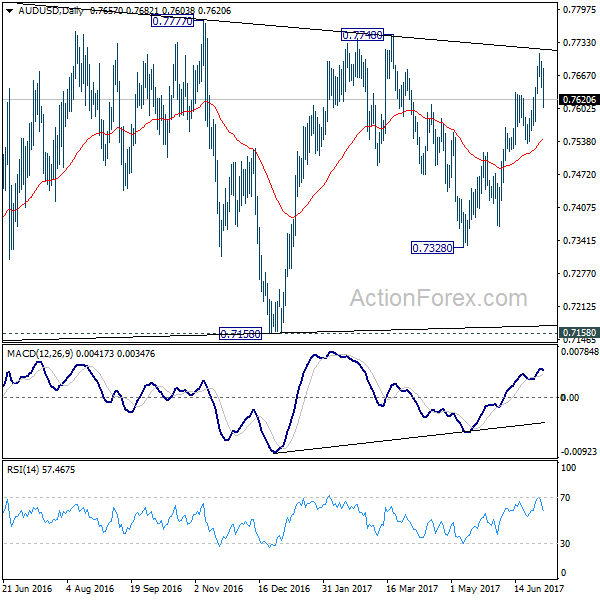