Yen and Swiss Franc are back in driving seats, together with Dollar. US stocks hit new record highs overnight reversed to closed lower. Asian markets follow and trade broadly lower. While there is no “concrete” good news regarding US-China trade deal, political tensions between the two super power intensified after Senate passed a bill that backs Hong Kong’s defense of its autonomy. Commodity currencies are under pressured with Canadian Dollar additionally weighed down by comments from a top BoC official.

Technically, USD/CAD’s rise from 1.3042 resumes by taking out 1.3270 temporary top. it’s now heading to 1.3347/82 resistance zone. Rebounds in EUR/USD and EUR/JPY are both losing upside momentum. We’ll see if they’re finished. GBP/JPY is also heading back to 139.36 minor support after failing to sustain above 141.50 resistance. Break of 139.36 should indicate confirm short term topping and bring deeper pull back.

Political tensions between US and China intensified after Senate passed the “Hong Kong Human Rights and Democracy Act” that aims as backing Hongkongers’ defense on autonomy that China promised in the Sino-British Joint Declaration. The Senate also unanimously passed a bill to ban export of munitions such as tear gas, pepper spray and rubber bullets to the Hong Kong police force.

Senator Marco Rubio of Florida, the bill’s lead sponsor, said “The United States has treated commerce and trade with Hong Kong differently than it has commercial and trade activity with the mainland of China.” He added “but what’s happened over the last few years is the steady effort on the part of Chinese authorities to erode that autonomy and those freedoms.”

The passage of the bill drew strong objections by China. In a statement, the foreign ministry said Vice Foreign Minister Ma Zhaoxu summoned William Klein, the U.S. embassy’s minister counselor for political affairs. Ma told Klein the situation in Hong Kong was part of China’s internal affairs and demanded that the U.S. stop its meddling.

US Ross: Trump was OK either way, with or without a China trade deal

US Commerce Secretary Wilbur Ross said yesterday that “we are optimistic we can get something done” on US-China trade deal. And, “if our negotiators felt there was no hope, they would have stopped.” Though, he also reiterated President Donald Trump was “OK either way” with or without a deal.

Ross said “he likes the tariffs we’re collecting. It hasn’t hurt import prices — they’re actually down from a year ago — it hasn’t hurt consumer spending, so it doesn’t bother us.” Trump said earlier in a cabinet meeting that “China’s got to make a deal that I like, if they don’t, that’s it.”

New York Fed President John Williams said yesterday that “from the domestic point of view, things are strong and continue to be strong”. However, “we’re dealing with various global factors we’re trying to navigate”. The US is facing headwinds from global slowdown, trade uncertainties and muted inflation pressures. As a result, “growth is starting to slow in the US”.

Nevertheless, Williams still believed that Fed has “monetary policy in the right place”. The three rate cuts since July put policy “well-positioned for a future that is uncertain.” Still, policy was “not locked in” and would respond to incoming data.

Canadian dollar tumbles broadly as partly weighed down by decline in oil price. But more importantly, BoC Senior Deputy Governor Carolyn Wilkins’ comments were seen as laying the ground work for policy easing at a later stage. In a speech, she said that “our policy interest rate may be relatively low now, but at 1.75 per cent we still have room to manoeuvre”. Also, there are other options including ” extraordinary forward guidance and large-scale asset purchases”.

Wilkins also emphasized the “importance of the interaction between monetary policy and financial vulnerabilities”. She added, “in the current context, lowering interest rates could provide some insurance against downside risks to inflation. However, this insurance would come at a cost in terms of higher household vulnerabilities down the road”.

Canadian economy is “performing relatively well overall”. But “beyond our shores, the global economy is facing immense challenges”, with US-China trade war “top of mind for all of us”. Additionally, there’s Brexit, Middle East tensions, social unrest in Hong Kong and some countries in Latin America. “The global context has worsened, increasing risks to the global expansion and the chances of financial stress that could spill over into Canada.”

Australia Westpac leading indicator dropped -0.1% mom in October. Japan trade deficit narrowed slightly to JPY -0.03T in October, worse than expectation of JPY 0.26T. Germany PPI will be featured in European session. But main focus will be on Canada CPI and FOMC minutes in US session.

USD/CAD’s rise from 1.3042 resumed by taking out 1.3270 resistance and hits as high as 1.3287 so far. Intraday bias is back on the upside for 1.3347/82 resistance zone. Firm break there will suggest completion of consolidation from 1.3664. On the downside, break of 1.3190 support is needed to indicate completion of the rebound. Otherwise, near term outlook will stay cautiously bullish in case of retreat. 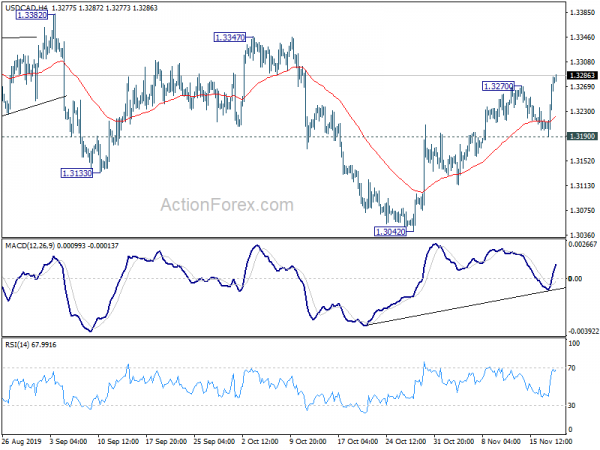 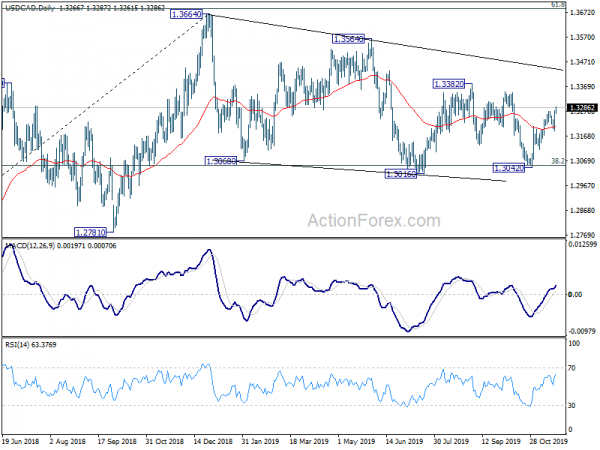 Euro Higher in Consolidative Markets, Yet to Break Resistance Against Dollar