Dollar Rises on Trade Hope, Yen Back Under Pressure

Global equities strengthen mildly today on some trade optimism. China’s announcement to tighten up intellectual property protection rules might boost the chance of finally an agreement with the US. Also, even the hawkish tabloid Global Times said they’re close to a deal. In the currency markets, Yen trades broadly lower following improving sentiments. But there is no sustainable support to commodity currencies. Instead, Sterling is the strongest one, followed by Dollar.

China said very close to phase 1 trade deal with US, committed to phase 2 and beyond

The Global Times, China’s hawkish tabloid run by the ruling Communist Party’s official People’s Daily, said in a tweet that US and China are “very close” to the phase one trade deal. China “remains committed to continuing talks for a phase two or even a phase three deal”with US “on equal footing”.

Foreign ministry spokesman Geng Shuang also reiterated that China hopes to work with US on a basis of equality and mutual respect on the ongoing bilateral trade negotiations.

The comments came after Reuters reported that some Chinese and US officials believed the ambitious “phase two” trade deal is looking less likely as the two countries struggle to strike a preliminary agreement.

However, manufacturing (down from -5.3 to -5.9) is “still stuck in recession” while companies still find their current order backlog very disappointing and they are planning further production cutbacks. Trade (up from -3.3 to 9), on the other hand, has “increased strongly”, with signs that “business will be very good this Christmas”.

IMF lowered Japan’s GDP growth forecasts in 2019 to 0.8%, down from 0.9%. It expects growth to slow further to 0.5% in 2020. IMF Managing Director Kristalina Georgieva urged that “strengthening the effectiveness of coordination between monetary and fiscal policy remains a high priority” for the country.

She added, “fiscal policy should be supportive to protect near-term growth and promote inflation momentum”. Also, “beyond the short-run, a clear commitment to long-term fiscal sustainability is essential.” On monetary policy, IMF called on BoJ to maintain support for the economy. It suggested BoJ to shift 0% yield target on 10-year JGB to a shorter maturity, and cut back its buying of long tern government bonds. Such action could steepen the yield curve and help financial institutions’ profitability.

Intraday bias in EUR/USD remains on the downside for 1.0989 support. Break will reaffirm the case that corrective rise from 1.0879 has completed at 1.1175. Deeper fall should then be seen to retest 1.0879 low. On the upside, above 1.1032 minor resistance will turn intraday bias neutral first. But risk will stay on the downside as long as 1.1097 resistance holds, in case of recovery. 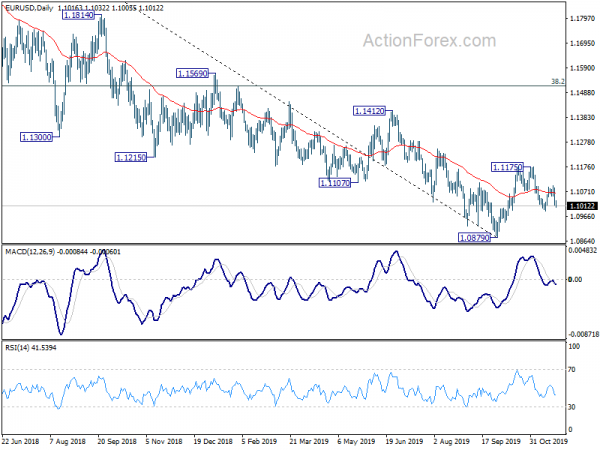