Dollar trades generally higher today as supported by better than expected economic data, in particular, durable goods orders. Though, Sterling is so far even stronger, as consolidations extend. On the other hand, Euro is the worst performing one, followed by Swiss Franc. For the week so far, the Pound is also the strongest while Yen is the weakest on strong risk appetite.

Technically, the bullish outlook in USD/CHF remains unchanged. Consolidation from 1.0027 should have completed at 0.9868 and further rise should be seen back to 1.0027. Meanwhile, EUR/USD edges lower and is eyeing 1.0989 support. Break will resume the fall from 1.1175 to retest 1.0879 low. While Sterling strengthen’s today, GBP/USD, EUR/GBP and GBP/JPY are staying in sideway trading, awaiting breakout.

Lagarde: ECB tasked to ensure Euro is safe and stable

ECB President Christine Lagarde said in a speech that the existence of Euro is to secure that trust in money so that people can focus on what really matters to them. And that’s the reason why ECB’s mandate and objectives reflect the well-known “functions of money”. Policy makers are tasked to “ensure that euro is safe and stable”.

The Euro also serves as the “most tangible symbol of European integration”, and “bears witness to the degree of integration we have achieved.” Support in the Euro is there with “76% of our citizens are now in favour of the single currency”. Though, she also warned that “trust takes years to build, seconds to break and forever to repair”.

BoJ Sakurai: Increasing need to be mindful of side-effect of low-rate policy

BoJ board member Makoto Sakurai, warned in a speech, “in guiding monetary policy, there’s an increasing need to be mindful of the side-effect of continuing our low-rate policy such as that on Japan’s banking system.”

“If there’s a crisis that could disrupt Japan’s financial system,” he noted, “a bold policy response is necessary”. However, “if the overseas slowdown driven by trade woes is moderate, and the speed at which it affects Japan’s economy is slow, we have room to scrutinise economic indicators in deciding on policy”.

He added, “the next half-year is when we need to carefully scrutinise economic developments”, including the impact of sales tax hike and global slowdown.

Exports to China rose NZD 279m to NZD 1.5B, led by rises in milk powder, lamb and beef. Exports to Australia was little changed at NZD 791m. Imports from China dropped NZD -100m to NZD 1.4B. Imports from EU dropped slightly by NZD-9.9m to NZD 965m.

From Australia, construction work done dropped -0.4% in Q3, better than expectation of -1.0%. 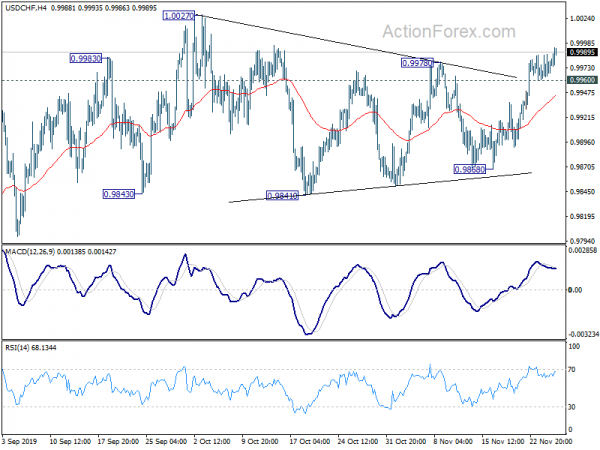 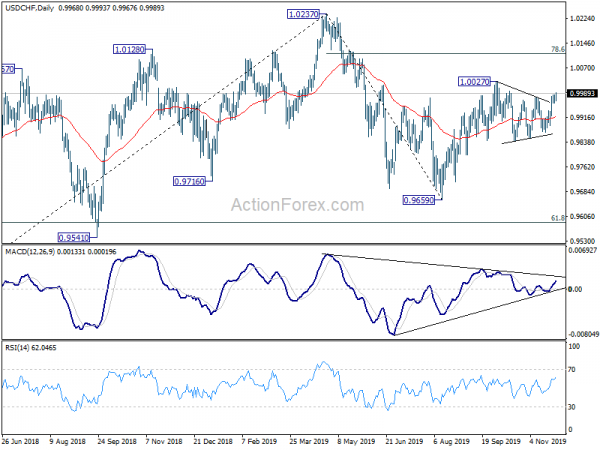