Yen trades broadly lower while Australian and New Zealand Dollars strengthen in Asia. Stock markets are cheering better than expected manufacturing data from China. Nikkei leads the way higher but gains in Hong Kong and Shanghai are limited. Yen is also additionally pressured by extended rebound in JGB yields. More manufacturing data will be featured today, in particular US ISM manufacturing index, which could further shape risk sentiments for December.

Technically, USD/JPY’s rally resumed after brief consolidations and is on track to 110.50 projection level. GBP/JPY also stays firm as rise form 126.54 is targeting trend line resistance at 143.65. A question for the today is whether EUR/JPY would break 121.46 resistance to align the bullish outlook with other Yen crosses. Meanwhile, Dollar’s rally attempt somewhat lost momentum, as seen in EUR/UAD and AUD/USD. Both pair would be watched to gauge underlying strength of the greenback.

China Caixin Manufacturing PMI rose slightly to 51.8 in November, up from 51.7 and beat expectation of 51.4. Markit noted there were solid increases in output and new business. Employment was broadly stable while inflationary pressures remained weak.

Zhengsheng Zhong, Director of Macroeconomic Analysis at CEBM Group said: “Currently, manufacturing investment may be lingering near a recent bottom. A low inventory level has lasted for a long time. If trade negotiations between China and the U.S. can progress in the next phase and business confidence can be repaired effectively, manufacturing production and investment is likely to see a solid improvement.”

Joe Hayes, Economist at IHS Markit, said Japan’s manufacturing sector “remains firmly stuck in contraction”. In particular, “export orders dropped at the fastest rate since mid-year amid reports of demand weakness at key trade destinations, namely China.” Also, signs of how deeply-rooted this manufacturing downturn in Japan has become were seen in other survey data.

Economic data released from Australia are generally disappointing. AiG Performance Index dropped to 48.1 in November, down from 51.6. That’s also the lowest level since August 2016, and indicates contraction in the sector. AiG said: “. The faster rate of contraction of the new orders index in November suggests a weak Christmas period ahead for Australian manufacturers. However, some manufacturing sectors are reporting better conditions than others, with manufacturers in the large food and beverage sector continuing to report buoyant conditions.”

In its Monthly Economic Indicators report, New Zealand Treasury Department noted that November data were “fair mixed” with some pointing to “further slowing in GDP growth”. Others indicated growth may be “levelling out”. On balance, “weaker-than-forecast investment and services exports are likely to see overall New Zealand GDP growth fall below Budget forecasts”

A big week ahead for USD, CAD and AUD

It’s a big week ahead with lots of important events. Two central banks will meet, RBA and BoC and both are widely expected to stand pat. Focuses will be on their guidance on future policy changes. In particular, RBA is generally expected to cut interest rates against in February. BoC is also edging closer to policy easing after last dovish statement.

In the US, major focuses will be on ISM indices and non-farm payrolls. There is practically no chance of any policy adjustment by Fed again in December. But next year’s rate path will be heavily dependent on incoming data and trade negotiations with China.

USD/JPY’s rally resumed after brief consolidations and intraday bias is back on the upside. Current rise from 104.45 is in progress for 100% projection of 104.45 to 108.47 from 106.48 at 110.50. Break will target long term channel resistance at 111.78 next. On the downside, below 109.33 minor support will turn intraday bias neutral and bring consolidations first. In this case, downside of retreat should be contained above 108.27 support to bring rise resumption. 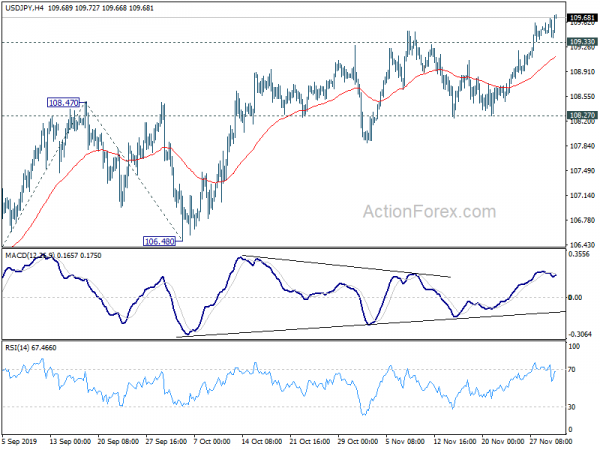 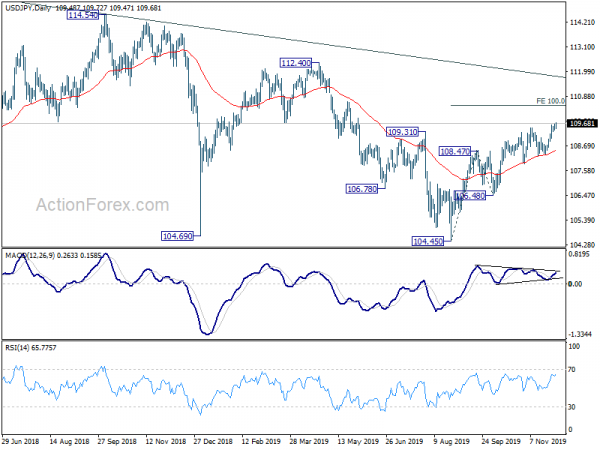