Dollar was sold off deeply this week on a string of weaker than expected economic data, as well as uncertainty over US-China trade deal. ISM indices and ADP private jobs all disappointed and the greenback’s hope now cling on Friday’s non-farm payrolls. There are conflicting reports regarding US-China trade deal phase one. We’d tend to believe nothing until it’s proven. Following Dollar, Euro and Yen are so far the weakest ones for the week so far.

Canadian Dollar surged overnight after surprisingly upbeat BoC statement. But it’s just mixed for the week so far. Sterling is a star performer instead, on optimism that Conservatives would win majority in the upcoming election on December 12, paving the way for an orderly Brexit finally.

Technically, USD/CAD’s break of 1.3190 support now suggests near term reversal. That is, rebound from 1.3042 has completed at 1.3327 and deeper fall would be seen back to 1.3016 key support. EUR/GBP seems to be having downside acceleration and breaks 0.8427 support. Focus will turn to 0.8411 long term fibonacci level.

BoJ Harada: Raising interest rates would just throw us back

Bank of Japan board member Yutaka Harada, a known dove, said in a speech that, the “current low interest rates are partly attributable to the deflationary monetary policies pursued in the past.” “The only way out is to maintain the current accommodative monetary policy in order to achieve sustained expansion of economic activity until we see increases in prices and interest rates.”

He also said, “banks’ low profitability is caused by the structural problem that they are accumulating more deposits than they can lend and the banking sector as a whole therefore will not be able to maintain its current size”. And, “raising interest rates would not solve the problem.”

Instead, ” raising interest rates would lead to the following: an appreciation of the yen; falling stock prices; declines in exports, investment, consumption and employment; and the reemergence of the employment ice age.” That would “just throw us back”.

Australia retail sales rose 0.0% mom in October, much worse than expectation of 0.3% mom. There were falls for clothing, footwear and personal accessory retailing (-0.8%), department stores (-0.8%) and household goods (-0.2%). They were were offset by rises in cafes, restaurants and takeaway food services (0.4%) and food retailing (0.1%). Other retailing was relatively unchanged (0.0%).

Yesterday, BOC left the policy rate unchanged at 1.75% as widely expected. The accompanying statement turned more hawkish than October. Despite ongoing trade war uncertainty, policymakers remained upbeat about the domestic economic growth. They also acknowledged that the global economy has stabilized. It now appears that the central bank would prefer to leave the policy rate on hold for an extended period of time. The possibility of a rate cut hinges on unexpectedly severe deteriorated in economic developments at home and across the globe. 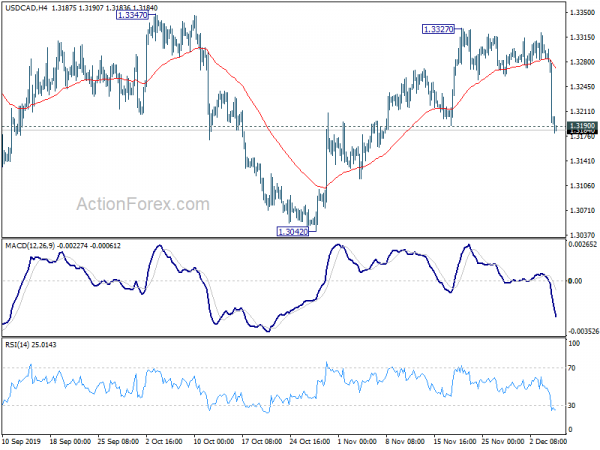 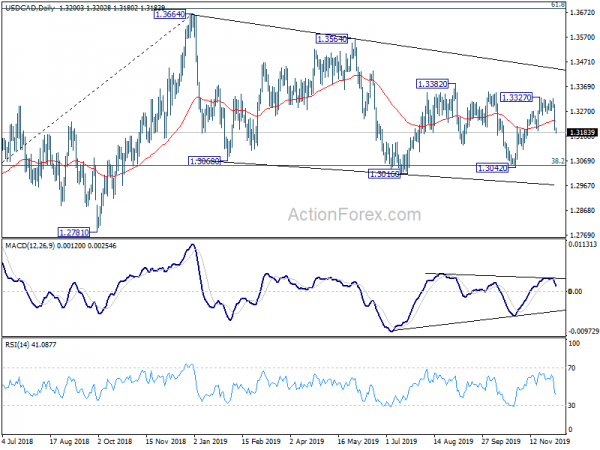