Canadian Dollar surges broadly again today as a top BoC official’s comment further dismiss the chance of rate cut. Sterling is following as the second strongest on election and Brexit optimism. On the other hand Australia Dollar is the weakest on as weighed down by poor retail sales data, followed by New Zealand dollar. US Dollar is mixed for now, having little reaction to better than expected jobless claims. After a string of weak data in ISMs and ADP, the greenback will look into tomorrow’s NFP report for the next move. Meanwhile, risk markets somewhat stabilized, awaiting the next development in US-China trade talks.

Technically, EUR/USD’s rally is somewhat capped by selloff in EUR/GBP. But for now, with 1.1066 minor support intact, EUR/USD is still in favor to rise further to 1.1179 resistance. USD/CHF and USD/JPY’s selloff halted ahead of key near term support at 0.9841 and 108.27 respectively. Some consolidations are likely before weekly close.

US initial jobless claims dropped to 203k, trade deficit narrowed to $47.2B

China insists on tariff rollbacks as condition for US trade deal

China insists on tariff rollbacks if a trade deal with US is to be reached. Ministry of Commerce spokesman Gao Feng said today that both side are maintaining close communications. But he emphasized “the Chinese side believes that if the two sides reach a phase one deal, tariffs should be lowered accordingly.” For now, he added there is no detail to be released.

The “natural deadline” for phase one US-China trade agreement is just 10 days away on December 15. On the US sides, the message conveyed was clear. If nothing happens between now and then, the scheduled tariffs will take effect. Two core issues are holding up the negotiations for now, China’s agricultural purchases and tariff rollbacks.

It’s believed that Chinese President Xi Jinping is in a tough political position after US passed the Hong Kong Human Rights and Democracy Act and the Uighur Act of 2019. There is tremendous domestic pressure on Xi that he couldn’t sign a trade deal without some concessions from the US for him to claim victory.

BoC Lane: No reason to move in step with Fed, hinting at no rate cut

BoC Deputy Governor Timothy Lane said in a speech enduring uncertainty of US-China trade relations has “already done some damage” to the global and Canadian economy. But “Canada also has notable strengths, and inflation remains on target”. He added, “Our strong labour market points to sources of growth, such as computer system design and other professional services, education, health care and financial services. It is because of this strength amid the turmoil that we say Canada is resilient, although it is not immune.”

Lane also noted Fed has cut interest rate three times this year. But he emphasized “There is no reason for the Bank of Canada to move in step with the Fed. On the contrary, the experience of the past decade shows that Canada and the United States have followed different roads, reflecting differences in our economic conditions.”

The comments reinforced the message from yesterday’s BoC statement. That is, the central is on hold, with a neutral bias.

Eurozone retail sales dropped -0.6% mom in October, worse than expectation of -0.4% mom. Volume of retail trade decreased by -1.1% mom for non-food products, while food, drinks and tobacco increased by 0.3% mom and automotive fuels by 0.6% mom.

EU28 retail sales dropped -0.4% mom. Among Member States for which data are available, the largest decreases in the total retail trade volume were registered in Germany and Ireland (both -1.9%) and Finland (-1.2%). The highest increases were observed in Portugal (2.1%), Poland (0.9%), Belgium and Romania (both 0.8%).

From Germany, factory orders dropped -0.4% mom in October, well below expectation of 0.4% mom.

BoJ Harada: Raising interest rates would just throw us back

Bank of Japan board member Yutaka Harada, a known dove, said in a speech that, the “current low interest rates are partly attributable to the deflationary monetary policies pursued in the past.” “The only way out is to maintain the current accommodative monetary policy in order to achieve sustained expansion of economic activity until we see increases in prices and interest rates.”

He also said, “banks’ low profitability is caused by the structural problem that they are accumulating more deposits than they can lend and the banking sector as a whole therefore will not be able to maintain its current size”. And, “raising interest rates would not solve the problem.”

Instead, ” raising interest rates would lead to the following: an appreciation of the yen; falling stock prices; declines in exports, investment, consumption and employment; and the reemergence of the employment ice age.” That would “just throw us back”.

Australia retail sales rose 0.0% mom in October, much worse than expectation of 0.3% mom. There were falls for clothing, footwear and personal accessory retailing (-0.8%), department stores (-0.8%) and household goods (-0.2%). They were were offset by rises in cafes, restaurants and takeaway food services (0.4%) and food retailing (0.1%). Other retailing was relatively unchanged (0.0%).

Intraday bias in USD/CAD remains on the downside at this point. As noted before, rise from 1.3042 should have completed at 1.3327. Deeper fall would be seen back to 1.3042 low. Decisive break there will carry larger bearish implications. On the upside, above 1.3202 minor resistance will turn intraday bias neutral first. But recovery should be limited below 1.3327 and bring another fall. 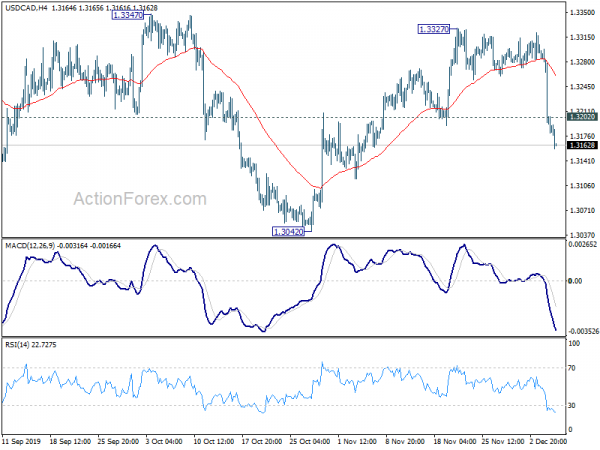 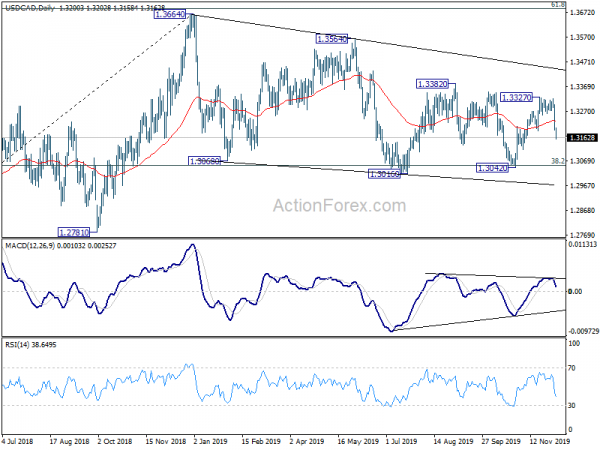