Dollar rebounds broadly in early US session after positive surprise in job data. However, upside is relatively limited at the time of writing, capped by disappointing wage growth. For now the greenback remains the weakest one for the week. Canadian Dollar’s fortune reversed after much worse than expected employment data. It’s not the worst performing one for today, and second worst for the week.

Technically, despite the strong rebound in the greenback, there are a few near term levels to take out. Those include 1.1066 minor support in EUR/USD, 0.6813 minor support in AUD/USD. 0.9926, minor resistance in USD/CHF, 109.20 minor resistance in USD/JPY. At least, these levels should be taken out firmly to indicate bottoming in Dollar in general.

Unemployment rate dropped to 3.5%, down from 3.6%, better than expectation of 3.6%. That also matches the lowest since 1969Participation rate was little changed at 63.2%. Average hourly earnings rose 0.2% mom in November, below expectation of 0.3% mom.

Canada employment dropped -71.2k in November, well below expectation of 10.0k. Unemployment rate surged to 5.9%, up from 5.5% and was way worst than expectation of 5.5%. Employment declined in Quebec, Alberta and British Columbia, while it was little changed in the other provinces.

In the goods-producing sector, fewer people worked in manufacturing (-28k) and in natural resources (-6.5k), with most of the declines in each of these industries observed in Quebec. The employment decrease in the services-producing sector was mostly accounted for by public administration, where the number of workers fell by -25k.

A batch of economic data is released from Japan today. Overall household spending dropped -5.1% yoy in October, worse than expectation of -3.0% yoy. The decline in spending was the first time in 11 month, and biggest fall since March 2016. It’s also a sharp reversal from the 9.5% rise in September, fastest growth on record.

Apparently, the September and October figures were results of the sales tax hike in October, from 8% to 10%. Additionally, impacts from typhoon also accelerated the decline in spending. Overall spending might contract as a whole Q4, before some moderate pick up in Q1.

Australia AiG Performance of Construction Index dropped to 40.0 in November, down from 43.9. The result indicates sharper decline in the construction industry on aggregate. It’s also the 15th straight month of contractionary reading. As AiG said, “this on-going weakness in business conditions was associated with a steeper fall in employment and a continued reduction in deliveries from suppliers.”

USD/CAD rebounds strongly in early US session, and dampens the original bearish view. However, it’s staying well below 1.3327 resistance. Intraday bias is turned neutral first. On the upside, break of 1.3327 will resume the rise form 1.3042 and target 1.3382 key structural resistance next. on the downside, through, break of 1.3158 will extend the fall from 1.3327 to retest 1.3042 low. 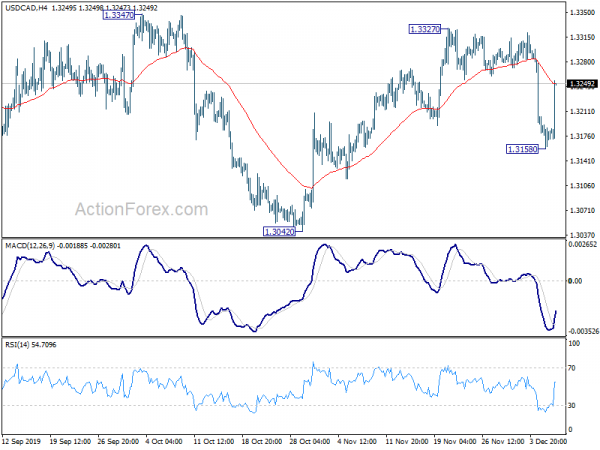 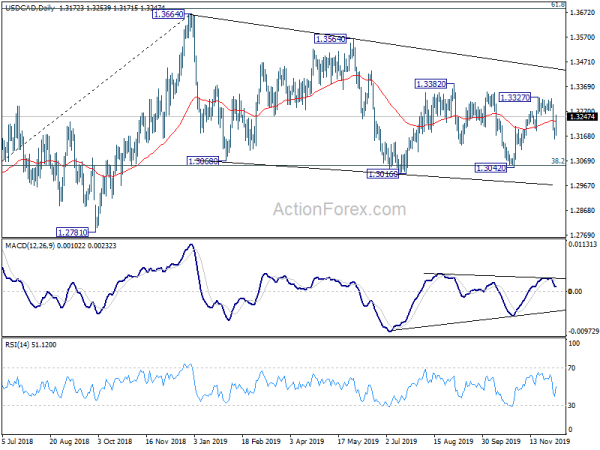