Canadian Dollar drops sharply in early US session after much weaker than expected retail sales data. Euro and Swiss Franc are also under some selling pressure. On the other hand, Sterling is paring some losses ahead of weekly close while Australian Dollar is generally firm. Over the week, Swiss Franc remains the strongest one for now, followed by Aussie. Sterling is the weakest, followed by Euro.

The UK Government named Andrew Bailey as the next BoE Governor, taking over from Mark Carney starting March 16. Bailey is currently the CEO of the Financial Conduct Authority. He worked at the BoE for 30 years, last serving as Deputy Governor from April 2013 to July 2016. On the appointment, he said he’s honored to take over “particularly at such a critical time for the nation as we leave the European Union.”

Finance Minister Sajid Javid said Bailey would serve an eight-year term. He added, “Andrew was the stand-out candidate in a competitive field. He is the right person to lead the Bank as we forge a new future outside the EU and level-up opportunity across the country.”

UK Q3 GDP growth was finalized at 0.4% qoq, revised up from 0.3% qoq. There were upward revisions to the output of all three main industries. Services grew 0.37%. Production grew a mere 0.01%. Construction grew 0.07%. Agriculture, forestry and fishing were flat. Also from UK, current account deficit narrowed to GBP -15.9B in Q3. Public sector net borrowing dropped to GBP 4.9B in November.

Joe Staton, Client Strategy Director at GfK, said: “We haven’t seen such a robust increase in confidence about our economic future since the summer of 2016. Despite official warning signs about the flat-lining of Britain’s economy, we know that record high employment and below target levels of inflation are helping to boost consumers’ expectations for the year ahead.

German Gfk consumer confidence dropped -0.1 to 9.6 in January. Economic expectations dropped sharply to -4.4, down from 1.7. Gfk said that ” impression among consumers that the German economy will weaken significantly has been reinforced.”. Also, “The trade conflicts between the US and China, on the one hand, and the US and the EU, on the other, continue to smolder, hanging like a sword of Damocles over Germany, a nation highly dependent on exports”.

While it’s the 35th straight month of core price increases, it remained well below BoJ’s 2% target. An official from  the Ministry of Internal Affairs and Communications said, “although at a slower pace, the index continues to rise, so there is no change in our view that the prices are rising moderately.”

A temporary low is formed at 1.3102 in USD/CAD and intraday bias is turned neutral first. On the upside, considering bullish convergence condition in 4 hour MACD, break of 1.3185 resistance will indicate short term bottoming. Fall from 1.3327 could have completed. Intraday bias will be turned back to the upside for 1.3327 resistance. on the downside, break of 1.3102 will target 1.3042 key support next. 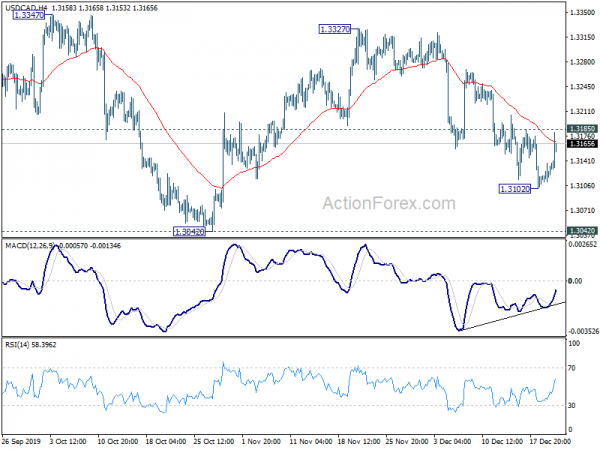 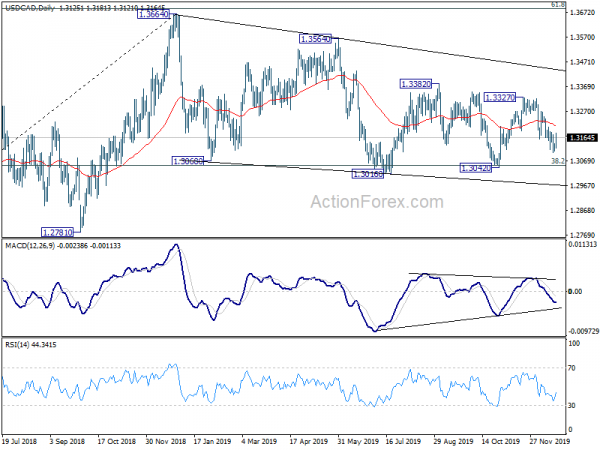