Markets in Holiday Mood, USD/CAD to Decide Next Direction

Australian and New Zealand Dollar strengthen mildly in Asia today. But markets remain quiet overall, very much in holiday mood. Dollar and Canada are the weaker ones. US President Donald Trump’s tweet late Friday indicated that US-China trade deal is still on the right track. China also announced to lower tariffs on over 800 products types on Monday. Focus will turn to US durable goods orders and Canadian GDP.

Technically, Sterling’s corrective falls started to lose momentum. rebound could be due in both GBP/USD and GBP/JPY, with focuses on 1.3133 and 143.86 minor resistance levels. EUR/AUD is relatively weak and could extend the fall from 1.1199 towards 1.1039 support. USD/CAD is still limited below 1.3185 minor resistance despite Friday’s rebound. The pair could make up its mind to confirm short term bottoming or not today, after data from US and Canada.

US President Donald Trump said late Friday that he “had a very good talk with President Xi of China concerning our giant Trade Deal.” He noted that China has already started “large scale purchases” of US farm products. Formal signing of the agreement is “being arranged”. Both presidents also discussed the issues of North Korea and Hong Kong.

While Trump is due to travel to Switzerland for the annual World Economic Forum in Davos at the end of January, Xi is not expected to be there. Hence, it’s an unlikely location for the signing. According to comments from US Trade Representative Robert Lighthizer, the 86-page trade agreement would be signed by him and Chinese Vice Premier Liu He in early January in Washington. The agreement is expected to come into effect 30 days afterwards.

China lowers tariffs on 859 imports types to below MFN rates

US durables, Canada GDP and some Japanese data featured in an ultra-light week

The economic calendar for the week is ultra-light, as most centers are on holiday on Wednesday and Thursday. US and Canadian data will be the main focuses on Monday, with durable goods and GDP. Japan will be a focus with BoJ minutes, summary of opinions and some data featured. Eurozone will also release ECB bulletin on Friday.

Intraday bias in USD/CAD remains neutral at this point. On the upside, considering bullish convergence condition in 4 hour MACD, break of 1.3185 resistance will indicate short term bottoming. Fall from 1.3327 could have completed in this case. Intraday bias will be turned back to the upside for 1.3327 resistance. On the downside, break of 1.3102 will target 1.3042 key support next. 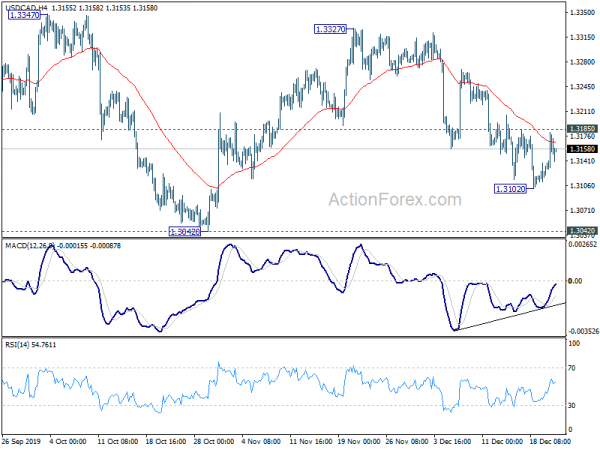 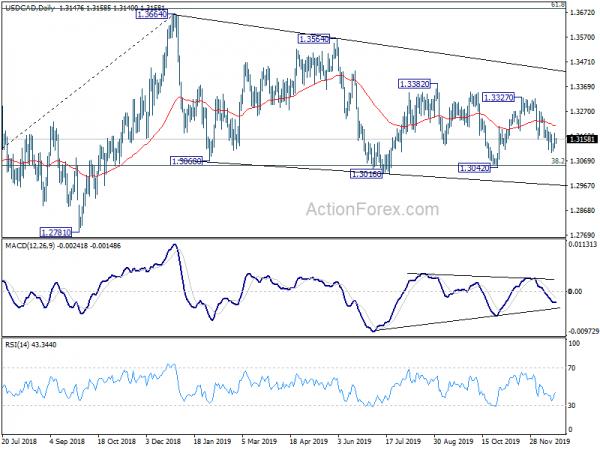