US Treasury Secretary Steven Mnuchin urged Italy and UK to suspend their plans to impose digital taxes. Or “if not they’ll find themselves faced with President Trump’s tariffs.” The warning came after France agreed to delay digital tax imposition through the end of the year, as US and France would work out a permanent resolution.

Mnuchin also said that the phase two trade deal may not be a “big bang” with all existing tariffs removed. Instead, “we may do 2A and some of the tariffs come off. We can do this sequentially along the way.”

The Kiel Institute for World Economy warned that US-China trade agreement is “significantly damaging” to the EU. Germany is “particularly affected”, and among the sectors, especially “aircraft and vehicle manufacturing.”  Gabriel Felbermayr, Kiel President, said, “the additional imports of US goods promised by China will divert imports from other countries.”

As calculated by Felbermayr and trade expert Sonali Chowdhry, EU exports to China will probably be USD 10.8B lower in 2021 compared with a scenario in which the agreement and the tariff war between China and the USA would not have existed. The EU would then have to bear about a sixth of the overall trade diversion caused by the agreement.

In absolute terms, the biggest losers in the EU are the manufacturers of aircraft (USD -3.7B), vehicles (USD -2.4B), and industrial machinery (USD – 1.4B). In terms of relative changes, the largest relative losses would again be in the aircraft sector (-28%), vehicles (-7%), and pharmaceutical products (-5%). “The affected industries are mainly located in Germany, but France has also been hit considerably”, says Felbermayr.

“The continued strong increase of the ZEW Indicator of Economic Sentiment is mainly due to the recent settlement of the trade dispute between the USA and China. This gives rise to the hope that the trade dispute’s negative effects on the German economy will be less pronounced than previously thought. In addition, the German economy developed slightly better than expected in the previous year. Although the outlook has improved, growth is still expected to remain below average.,” comments ZEW President Achim Wambach.

In the regular post-meeting press conference, Governor Haruhiko Kuroda said for now “the benefits of our policy still exceed the costs”. And the central bank will “continue to pursue powerful monetary easing to achieve 2% inflation.” Though, he added, “BOJ must be mindful of the impact prolonged ultra-low rates could have on financial intermediation.”

Kuroda also noted that “progress in US-China trade talks and Brexit have led to an improvement in risk sentiment”. But “uncertainty remains on the “fate” of the US-China trade talks”. Plus, “there are also geopolitical risks in the Middle East”. “If the economy accelerates dramatically, there could be some debate. But for now, it’s appropriate to maintain our current policy stance. Various overseas risks remain, so the current monetary policy with an easy bias will be sustained for some time,” he said.

EUR/USD failed to sustain below 1.1085 support and recovered. Intraday bias remains neutral for the moment. Further fall is mildly in favor as long as 1.1172 resistance holds. Break of 1.1076 will resume the fall from 1.1239 to 1.0981 support. Decisive break there will confirm that whole corrective rise from 1.0879 has completed. On the upside, above 1.1172 will turn bias to the upside for 1.1239 instead. 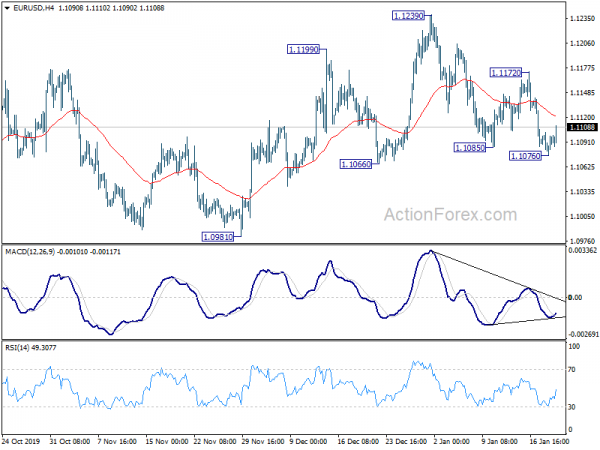 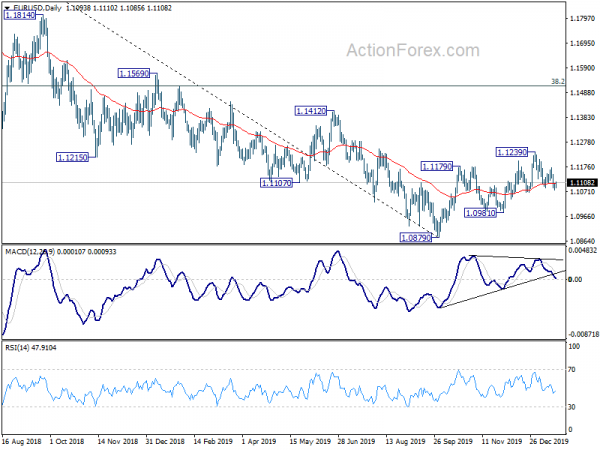