Risk aversion continues to be the main theme in the markets today, on the back of global coronavirus pandemic and plunge in oil price. US trading is halted for 15 minutes after DOW tanks more than -1800 pts at open while S&P 500 drops -7%.. The selloff triggered a key market circuit breaker which halts trading for 15minutes. In the currency markets, commodity currencies remain the weakest ones, led by Canadian. Yen, Euro and Swiss are the strongest. Dollar remains mixed as it reversed much of earlier gains against commodity currencies.

Eurozone Sentix plunged to -17, a new Lehman moment in the making

Also released in European session, Germany trade surplus narrowed to EUR 18.5B in January, below expectation of EUR 18.8B. Industrial production rose 3.0% mom in January versus expectation of 1.5% mom. Swiss unemployment rate was unchanged at 2.3% in February.

German government announced additional EUR 12.4B in state investment to help companies hit by the coronavirus outbreak. The package agreed by the coalition include liquidity support to companies suffering coronavirus related cash crunch There will be expansions to access to the government subsidized scheme called “Kurzabeit”.

Olaf Scholz, finance minister, pledged that Germany was prepared “to do everything needed to stabilise the economy and secure jobs”. “We will ensure that there is always enough liquidity available for business”. He added that it’s impossible to say if Germany will slip into recession this year.

Italian Prime Minister Giuseppe Conte promised “massive shock therapy” to overcome the impact of the coronavirus outbreak. The country announced on Sunday massive lockdown across much of its north, including the financial capital Milan. He told La Repubblica, “we will not stop here. We will use a massive shock therapy. To come out of this emergency we will use all human and economic resources.

He added, “we’ll take appropriate action without hesitation as needed with an eye on the impact of the spread of the coronavirus, particularly through domestic and overseas market moves.”

The comments raises the chance of some sort of policy stimulus to be announced after meeting on March 18-19. But it’s unsure which part of BoJ’s toolbox would be adopted.

Intraday bias in USD/JPY remains on the downside at this point. Current down trend should target next key support level at 98.97. On the upside, above 104.99 minor resistance will turn intraday bias neutral first. But recovery should be limited well below 112.22 resistance to bring fall resumption. 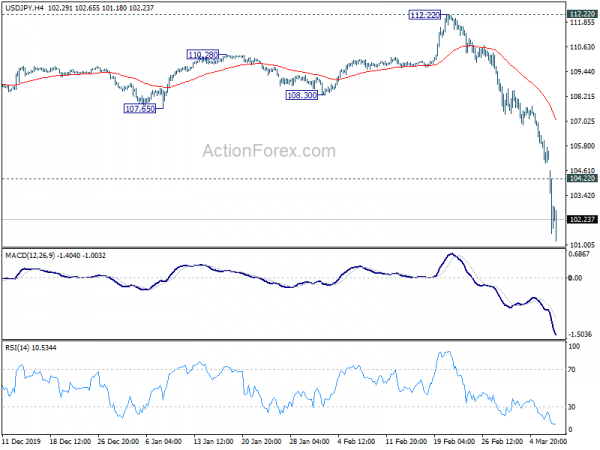 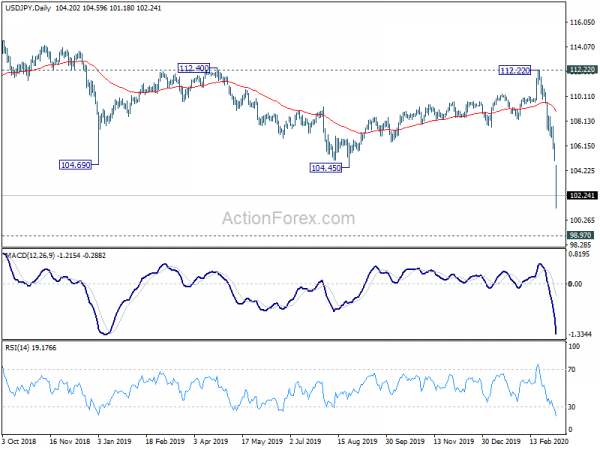