Market sentiments take a u-turn today after Fed surprised the markets with another emergency announce. Now, the targets for asset purchases are removed and Fed is going into QE unlimited. US futures turned from limit down to positive while major European indices pared back much of earlier losses. The reaction in the forex markets is very muted, however. Major pairs and crosses are generally staying inside Friday’s range.

Euro is currently the relatively strongest one, followed by Yen and Swiss Franc. Canadian Dollar is the weaker one, followed by New Zealand Dollar and Dollar. Technically, EUR/USD, GBP/USD, USD/CHF, USD/JPY, AUD/USD and USD/CAD are all staying in near term consolidations, which will likely extend for a while. Similar picture is seen in Yen crosses too.

Fed announced a new round of aggressive measures to support the US economy against coronavirus pandemic impacts. In particular, Fed will purchase bonds to keep borrowing costs low without specifying a limit. There will also be programs to ensure credit flows into businesses and governments.

Fed said it will buy treasuries and agency mortgage-backed securities “in the amounts needed to support smooth market functioning and effective transmission of monetary policy to broader financial conditions and the economy.” Last week, Fed said it would by at least USD 500B of treasuries and USD 200B of agency MBS.

Additionally, Fed will support “the flow of credit to employers, consumers and businesses by establishing new programs that, taken together, will provide up to $300 billion in new financing.”

Bundesbank: Slide into a pronounced recession could not be prevented

Bundesbank said in its monthly report that the country is “facing previously unknown challenges as a result of the rapidly spreading coronavirus pandemic”. On the economy’s side, the “slide into a pronounced recession could not be prevented”. And, “economy recovery would only start when than pandemic risk was effectively contained”.

The coronavirus pandemic would affect the economy through various channels. Firstly, domestic service sectors will be most affected. Hospitality and entertainment sectors, trade fair and aviation companies are likely to “suffer particularly sharply from falling demand and precautionary closings”.

Other companies will also be affected by “potential loss of work and sales as a result of protective and precautionary measures”. Contagion effect from abroad would affect export and industry. Supply bottlenecks for important primary products threatened production bottlenecks. “All of these impairments listed can trigger negative confidence and second-round effects in Germany,” said the Bundesbank.

Ifo institute warned that the coronavirus pandemic could cost Germany’s economy between EUR 255B and EUR 729B. President Clemens Fuest said such costs would “exceed everything known in Germany from economic crises or natural disasters in recent decades. ” And, “depending on the scenario, the economy shrinks by 7.2 to 20.6 percent points”.

“If the economy comes to a standstill for two months, depending on the scenario, costs come to between 255 and 495 billion euros. Economic output then shrinks by 7.2 to 11.2 percentage points a year, “says Fuest.

In the best scenario, it is assumed that economic output will decline to 59.6 percent for two months, recover to 79.8 percent in the third month and finally reach 100 percent in the fourth month.

“With three months of partial closure, the costs already reach 354 to 729 billion euros, which is a 10.0 to 20.6 percentage point loss in growth,” says Fuest.

RBNZ announced today to launch a NZD 30B Large Scale Asset Purchase (LASP) program of government bonds. The purchases will be “across a range of maturities” in the secondary market over the next 12 months. It aims to “provide further support to the economy, build confidence, and keep interest rates on government bonds low.” RBNZ will monitor the effectiveness and “make adjustments and additions” if needed.

Over the weekend, Governor Adrian Orr said in an article that “the evolving coronavirus outbreak has unsettled communities around the world, creating uncertainty about the future.” “New Zealand is no exception” but “we start in the best possible relative position”. The central bank already cut the Official Cash Rate form 1.00% to 0.25% and remains “committed to keep it there for at least the next year”. He added, “we are ready to act further, with more firepower in reserve to keep the financial taps turned on.”

Separately, Prime Minister Jacinda Ardern announced today that the country is “now preparing to go into self isolation”. All non-essential services, schools and offices will be shut over the next 48 hours. Supermarkets and pharmacies will remain open.

A piece of good news regarding the coronavirus pandemic is that South Korea on Monday reported its lowest number of new cases since the peak on February 29. The KCDC said there were only 64 new confirmed cases, taking the tally to 8961. Death toll rose by 1 to 110. The number of deaths stay at a relatively low level comparing to countries like Italy and Iran. It’s also the 12th straight days of new cases at around 100 or less, much better than the peak of 909. Also, 257 patients were released from hospital.

Separately, Vice Finance Minister Kim Yong-beom said a new task force with be set up within the ministry. Special meetings will be held everyday to assess the situation and decide if more policy actions are needed to stabilize the financial markets. The government pledged to make all efforts to prevent extreme market volatility to turn into credit crunch.

Intraday bias in EUR/USD remains neutral for consolidation above 1.0635 temporary low. Stronger recovery cannot be ruled out but upside should be limited by 1.0981 resistance to bring fall resumption. on the downside, break of 1.0635 will extend larger down trend for 1.0397 projection target next. 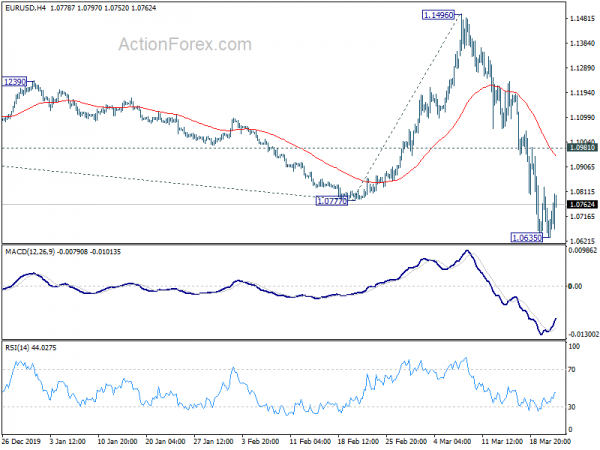 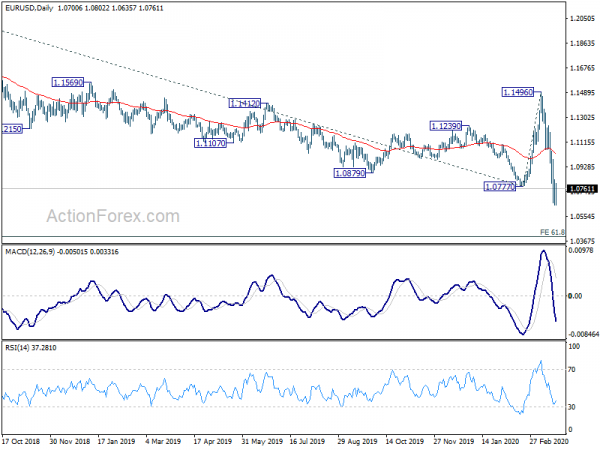