Asian markets generally strengthen today and are given another lift after US politicians finally agreed to a USD 2T coronavirus stimulus deal. Australian Dollar leads other commodity currencies higher. On the other hand, Yen weakens broadly, followed by Yen and then Dollar. Some important economic data will be released today including German Ifo, UK CPI and US durable goods orders. But these data might be shrugged off again by the markets. Main focus remain on the development of coronavirus pandemic, which has led to 18900 deaths globally already.

Technically, we’d maintain then current pull back in Dollar is just a leg inside a consolidation pattern. levels to watch include 1.0981 resistance in EUR/USD, 1.2129 resistance in GBP/USD, 0.9901 support in USD/CHF, and to a lesser extent 1703.28 high in Gold. As long as these levels hold, we’d expect Dollar to make a come back sooner or later. Though, the picture could be complicated by USD/JPY, which is facing 112.22 key resistance. Reactions from there could spread to other Yen pairs, or Dollar pairs, or both.

It’s reported that Senate Democrats and Republicans have finally reached an agreement of the USD 2T economic response package for coronavirus pandemic, after some unexpected jitters. No details were released yet but the package should include assistance to companies, cities and states. There will be checks to most Americans, with loans and aid for small business, unemployment insurance, tax deferrals etc. Senate vote could be held as soon as Wednesday, then followed by House vote. 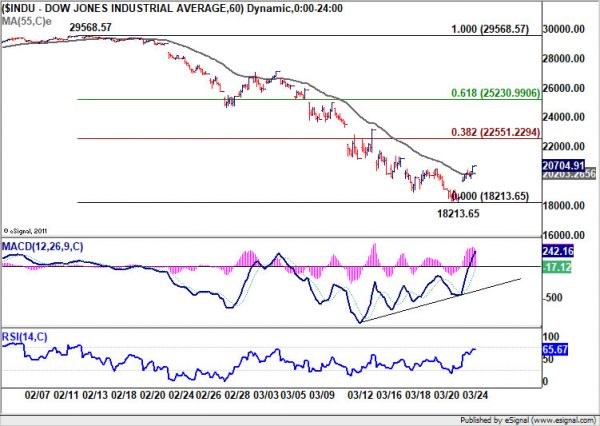 Chairman Greg Gilligan: “Close to half of the companies said the global spread of the virus would have a moderate-to-strong impact on their China operations. But the views aren’t all grim: nearly a quarter of our companies expect a return to normal business operations by the end of April, while 22% have already resumed normal operations, and 40% report they will maintain previously planned investment levels, up significantly from last month’s survey.”

BoJ opinions: Impact of coronavirus could be significant and not just temporary

In the summary of opinions of BoJ’s March 16 meeting, it’s noted that “global financial and capital markets have been unstable” and “Japan’s economic activity has been week” due to growing uncertainties over coronavirus pandemic. “Downward pressure on Japan’s economy has been increasing due to a constrain on economic activity”. Firms are facing a “sudden deterioration in business conditions” and “the situation has been very serious”.

It’s also warned that the impact of the pandemic can be “significant and not just temporary”. And there is concern that the economy could “remain weak even after overseas economies recover”. There are “doubts regarding the scenario that the economy will strongly recover after the crisis caused by COVID-19 recedes.”

Regarding policy responses, “it is essential to maintain a strong cooperative framework between the Bank and the government as well as among major central banks, while closely sharing information.”

New Zealand trade balance reported NZD 594m surplus in February, above expectation of NZD 550m. Looking ahead, German Ifo business claims is a major focus in European session. US will also release CPI and PPI. Later in the day, focus will turn to US durable goods orders, house price index.

USD/CAD drops mildly today as consolidation from 1.4667 is extending. Deeper pull back could be seen. But downside should be contained well above 61.8% retracement of 1.3202 to 1.4667 at 1.3762 to bring rebound. On the upside, sustained break of 1.4689 will confirm larger up trend resumption. 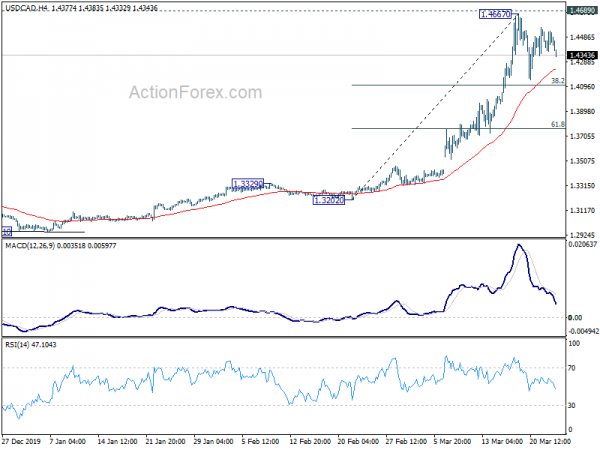 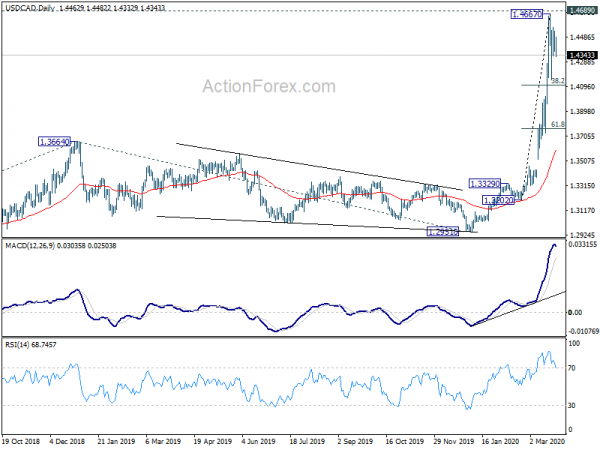