Directions in the markets are relatively unclear for now. US stocks closed higher overnight, but relatively close to opens. Asian markets are mixed with slight gains in Nikkei and HSI. WTI crude oil seems to be stabilizing above 10 handle after horror actions earlier. In the currency markets, Dollar remains the strongest one for the week, followed by Yen, but there is no clear follow through buying. Commodity currencies and Sterling are weak. Euro could be a focus for today as fresh round of PMIs would be released.

Technically, EUR/USD turns softer today and focus is back on 1.0768 support. Break will extend the fall from 1.1147 to retest 1.0635 low. The question is, if that happens, whether EUR/JPY, EUR/GBP and EUR/AUD would follow with downside breakout. In particular, EUR/JPY might face 115.86 low with next decline and break there will resume larger down trend. That could, in turn drag USD/JPY through 106.91 support to resume the fall from 111.71. Very interactive.

Joe Hayes, Economist at IHS Markit, said: “The crippling economic impact from global coronavirus pandemic intensified in April… The decline in combined output across both manufacturing and services was the strongest ever recorded by the survey in almost 13 years of data collection, surpassing declines seen during the global financial crisis and in the aftermath of the 2011 tsunami.

“Overall, GDP looks set to decline at an annual rate in excess of 10% in the second quarter. The current state of emergency will stay in place until 6 May, although given Japan’s lagged response relative to other parts of the world, one would expect this to be extended, meaning the the harsh economic effects are likely to drag out further”.

Australia PMI manufacturing dropped to 45.6, services down to 19.5

Australia CBA PMI Manufacturing dropped fro 49.7 to 45.6 in April. Manufacturing output decreased for the eighth successive month in April, and to the greatest extent since the survey began in May 2016. PMI Services dropped from 38.5 to 19.5. Company shutdowns and coronavirus restrictions resulted in severe declines in both business activity and new orders in the service sector. PMI Composite dropped from 39.4 to 22.4.

CBA Head of Australian Economics, Gareth Aird said: “This is an astonishing result. The collapse in the headline index reflects the severe contraction in economic activity currently taking place. The services sector has been hit a lot harder than the manufacturing sector. And the pace of job shedding is concerning though not surprising given the large number of Australian businesses that remain shut. The extent to which the PMIs rebound will be dictated in large part by the duration of the enforced shutdown”.

Singapore’s Trade and Industry minister Chan Chun Sing said today that, the country is “very likely” to see a sharper contraction in the economy due to coronavirus pandemic. He said, “we are really concerned that worldwide, this is going to lead to a more serious problem than many had anticipated just a month ago”.

GDP already experienced -10.6% annualized contraction in Q1, the worst in a decade. Back in March, the government forecast a contraction of 1-4% this year. However, coronavirus spread worsened this month, as infections surged from around just 1000 to over 10000. The government decided to extend the so-called “circuit-breaker” coronavirus containment measures by four weeks until June 1. Chan said he hoped to “progressively open” in a months time.

Separately, Citigroup said earlier this week that the Singaporean economy would contract by -8.5% this year after the “circuit breaker” extension. “The circuit breaker would cause close to 25%-30% of GDP to come to a standstill, with every month of extension further reducing 2020 GDP by 2% to 2.5%,” Citi’s economists wrote in a report. “The technical rebound after the lifting of the circuit breaker on 1st Jun will be capped by continued social distancing and only gradual recovery in exports.”

Eurozone PMIs will be a major focus in European session while Germany Gfk consumer sentiments will also be released. UK PMIs will catch a lot of attentions too while public sector net borrowing and CBI industrial trends orders will be released too. Later in the day, US jobless claims is unlikely to show any drastic drop in the figures. PMIs and new home sales will also be featured. 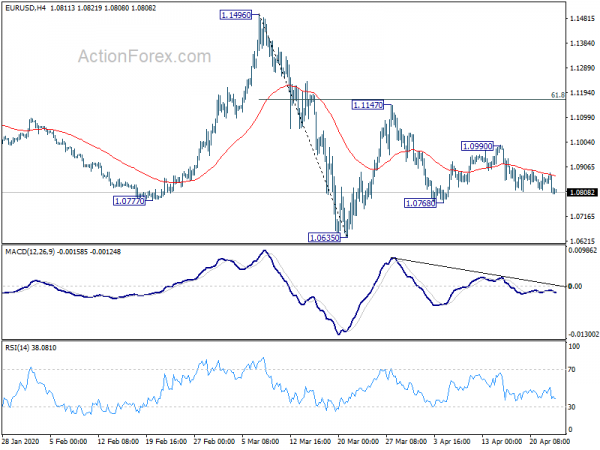 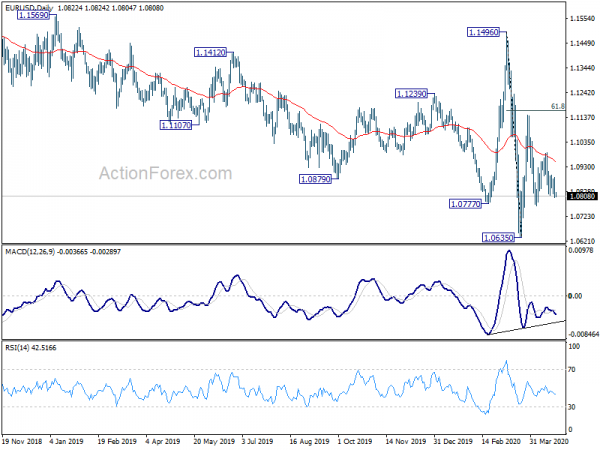