Sterling stays generally weak as another week starts. The Pound was weighed down by comments from BoE chief economists Andy Haldane, who said that negative rate was “something we’ll need to look at – are looking at – with somewhat greater immediacy.” Dollar is also slightly softer with mild risk recovery in Asian markets. On the other hand, Australian and New Zealand Dollars are the strongest ones. But we’ll have to see if risk rally could sustain through the week.

Technically, Gold’s firm break of 1747.75 high last week confirmed up trend resumption. Focus is now on key medium term resistance at 61.8% projection of 1160.17 to 1703.28 from 1451.16 at 1786.80. It’s an important hurdle to overcome and break will probably prompt more upside acceleration. However, rejection from there could trigger a rather deep pull back. Either way, Dollar might finally have some reactions. 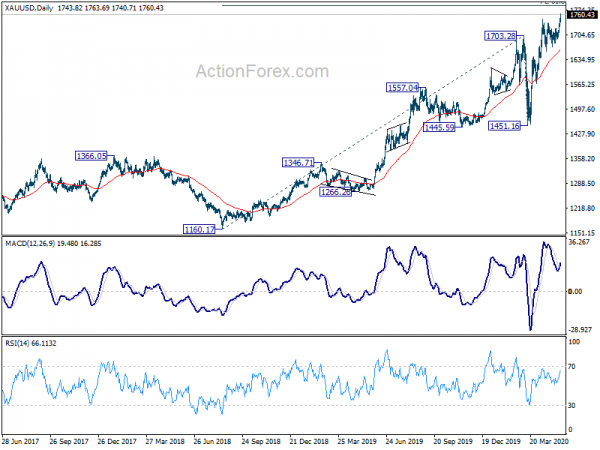 Fed Powell: Negative rates probably inappropriate, not useful for US

“There’s no clear finding that it actually does support economic activity on net, and it introduces distortions into the financial system, which I think offset that,” Powell said. “There’re plenty of people who think negative interest rates are a good policy. But we don’t really think so at the Federal Reserve.” “There’s a lot more we can do. We’ve done what we can as we go. But I will say that we’re not out of ammunition by a long shot.”

On the economy, Powell said, “assuming there’s not a second wave of the coronavirus, I think you’ll see the economy recover steadily through the second half of this year”. However, “for the economy to fully recover people will have to be fully confident, and that may have to await the arrival of a vaccine,” he added.

UK and EU continued to complain each other after last week’s Brexit negotiation stalemate”. UK Cabinet Officer Minister Michael Gove said there is a “big philosophical difference” between the two sides. And EU wants UK to “follow their rules even after we have left the club”. Though he remained “confident” that a “there is a deal to be done” It “just requires a degree of flexibility on the EU side which I’m sure that they will appreciate they need to show.”

On the other hand, Irish Foreign Minister Simon Coveney criticized on Sunday that UK was “essentially rewriting” the commitments in the political declaration of the Brexit deal. “Until the UK changes its approach in the context of giving the EU assurance that they are not going to effectively deregulate their economy while expecting free access in the EU single market, I think we’re going to continue to be in real difficulty in these talks,” he added.

Economy Yasutoshi Nishimura warned “both domestic and external demand show Japan’s economy is in a severe state.” The economy is expected to slump significantly.

The week ahead: Global PMIs to indicate depth of Q2 contraction

RBA and Fed will release meeting minutes this week. As the communications have been rather clear since the start of the coronavirus pandemic, we’re not expecting anything surprising there. Fed Chair Jerome Powell will also testify. He’s already clear that Fed is not considering negative interests. Many Fed officials expressed objection to negative rates too. Hence, we don’t expect Powell to have a sudden deviation from that stance.

May PMI readings from Eurozone UK, US, Japan and Australia will likely be more market moving. These data would provide more insight into how deep the global contraction in Q2 is. UK will release employment CPI and retail sales too. German ZEW, Canada CPI and retail sales, US jobless claims, New Zealand retail sales, Japan GDP and CPI, are other data to watch.

Intraday bias in GBP/USD remains on the downside at this point. Corrective rise from 1.1409 should have completed. Deeper fall should be seen back to retest this low next. On the upside, above 1.2238 minor resistance will turn intraday bias neutral first. But risk will stay on the down side for another decline. 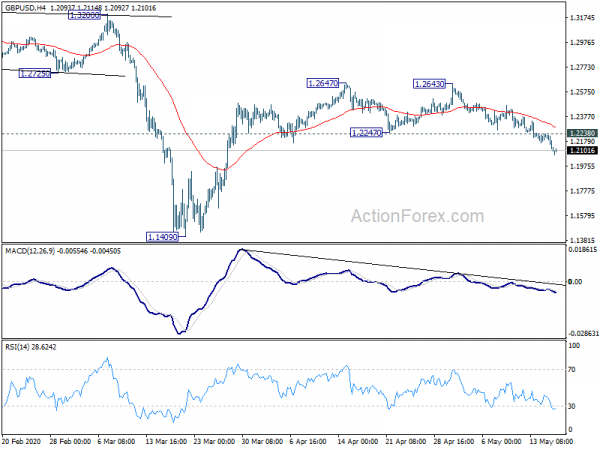 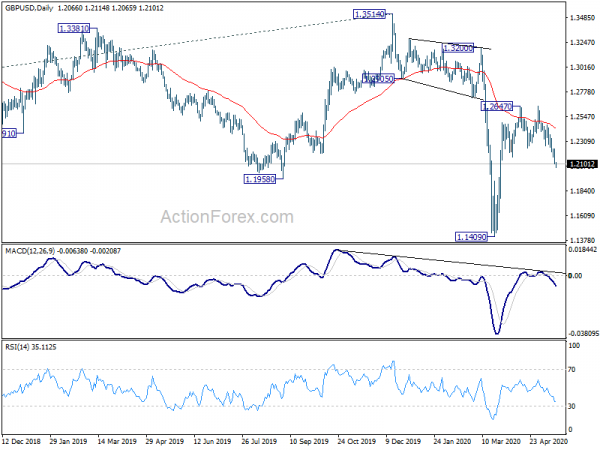