Dollar remains generally weak in Asian session, with notable selloff against Yen too. Markets generally turned cautious as US President Donald Trump is set to announce his new China policies on Friday. This is in response to China’s passing of national security law to forcibly impose on Hong Kong. With that Secretary of State Mike Pompeo certified to the US Congress that Hong Kong has effectively lost its autonomy and no longer warrants special treatment by the US. Trump is expected to announce a range of penalties but the scope is unclear for now.

Japan’s industrial production plunged -9.1% mom in April, even worse than expectation of -5.1% mom. That’s the biggest decline since comparable data became available back in 2013. “Conditions among manufacturers particularly in the auto sector are severe, but production has already restarted in China and I think that they will be resumed in the United States and Europe as well,” said Economy Minister Yasutoshi Nishimura after the release of the data.

ANZ said: We absolutely should celebrate our success in beating back COVID-19, but the wreckage lies all around us. The loss of jobs in international tourism in particular is a hole that won’t be filled easily or quickly. We see elevated unemployment affecting household sentiment and spending for a long time yet.”

The government relaxed the coronavirus restrictions further today, allowing gatherings of up to 100 people. Finance Minister Grant Robertson said New Zealand “now has some of the most relaxed settings in the world. Because of our success in fighting this virus, our public health efforts to go hard and go early have allowed us to open up our economy much quicker than many other countries,” he said.”

New York Fed President John Williams dismissed the idea of negative rates again and said “we have other tools that I think are more effective and more powerful to stimulate the economy”. He added, “I don’t think negative rates is something that makes sense given the situation we’re in because we have these other tools that can be used,” referring to the low interest rates, forward guidance and the balance sheet. Regarding the economy, “over time, the biggest question mark is how the consumer is going to behave,” Williams said. “How long will people take to really want to take advantage of tourism and other things.”

Separately, Dallas Fed President Robert Kaplan said he expected growth in H2 and 2021. His forecasts are based on assumption that consumers would travel, eat out and broadly re-engage in the economy again. But risks are to the downside if the US doesn’t ramp up coronavirus testing. His baseline is that unemployment rate would fall to 10-11% by year-end and dip further to below 7% by end of 2021.

The economic calendar is rather busy today. Eurozone CPI will be a major focus in European session. Eurozone M3, German import price and retail sales, France GDP and Swiss KOF will also be featured.

Later in the day, US personal income and spending will be a focus, together with trade balance, Chicago PMI and wholesale inventories. Canada will also release GDP, IPPI and RMPI.

USD/JPY drops notably today but stays above 106.74 support so far. Intraday bias remains neutral first and outlook is unchanged. . We’re favoring the case that corrective fall from 111.71 has already completed at 105.98. Break of 108.08 will turn bias to the upside for 109.38 resistance. However, break of 106.74 support will dampen our bullish view and turn bias to the downside for 105.98 instead. 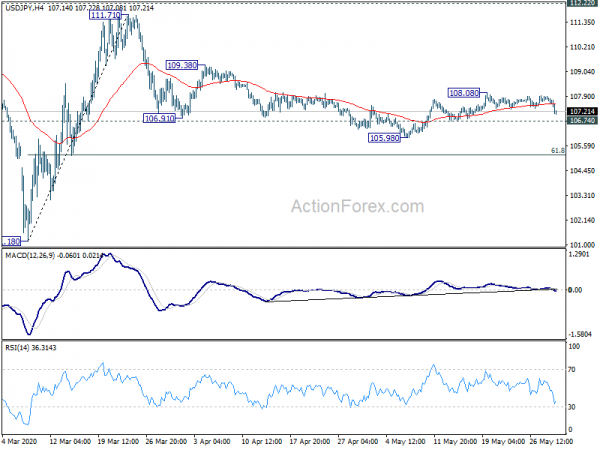 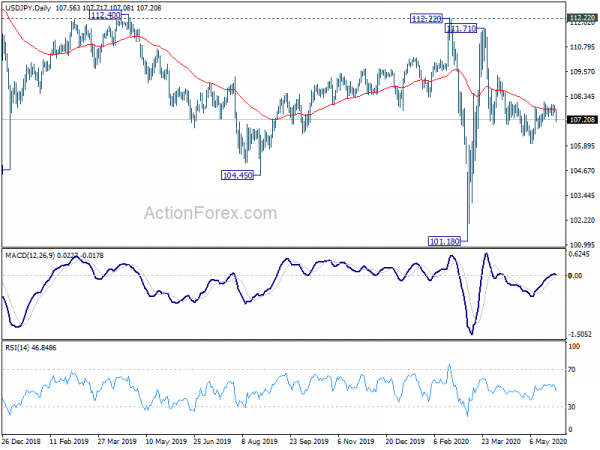