Dollar and Yen remain the overwhelmingly weakest ones for the week even though risk appetite seems to be taking a breather again. In particular, the greenback suffered steep selling after Euro bulls cheered ECB’s PEPP expansion. The common currency is one of the strongest one this week, just next to Kiwi and Aussie. Non-farm payroll report from the US is the next focus. But it’s unlikely to give Dollar any strength for a rebound.

Technically, EUR/CHF’s break of 1.0811 key resistance again is worth a mention. A weekly close above the level, as well 55 week EMA, would be another solid sign of medium term strength in Euro. Further rally in EUR/CHF, towards 1.1059 key cluster resistance, could take Euro higher elsewhere. While commodity currencies have been strong, both Aussie and Canadian are losing some momentum. 0.6856 minor support in AUD/USD and 1.3572 minor resistance in USD/CAD would be watched for sign of a near term pull back 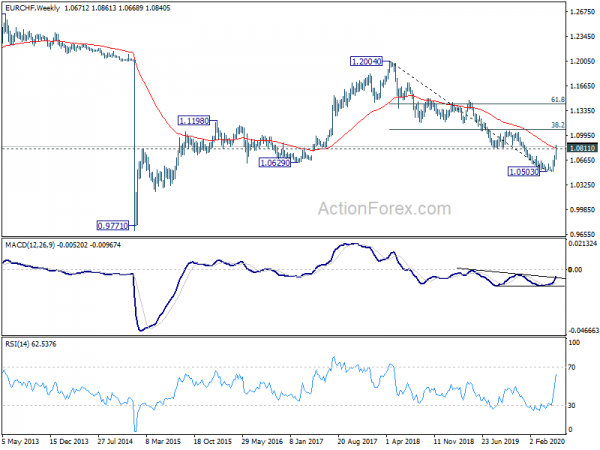 US non-farm payrolls report will be a major focus for today. Markets are expecting NFP to show another -8m job less in May. Unemployment rate is expected to jump further up from 14.7% to 19.6%. Other employment data were not too promising. ADP report showed -2.76m contraction in private sector jobs. ISM manufacturing employment improved to 31.8 while non-manufacturing employment rose to 32.1. But both were deep in contraction region. Four-week moving average of initial jobless claims also stayed huge at 2.28m.

Dollar index suffered another round of steep decline this week. Selling accelerated further after ECB announced to expand the PEPP yesterday. Technically, the strong break of 55 week EMA in DXY further affirm the case that whole rise form 88.2 (2018 low) has already completed at 102.99, ahead of 103.82 high (2016 high). Next defend zone is between 94.65 support and long term trend line at around 95.5. We’d look for support from there to bring a near term recovery. 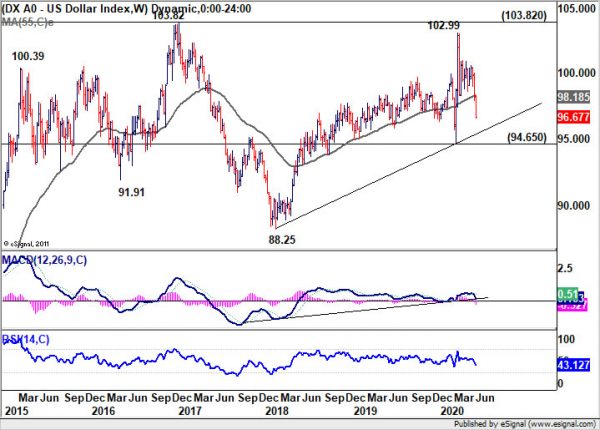 Australia AiG Performance of Services Index rose to 31.6 in May, up from 27.1. While the data indicates slower pace of contraction, it’s still the second lowest result on record. In trend term, the index dropped -3.4 pts to 30.8, with declines across all services sectors.

AiG also noted, “heavy restrictions on activity in response to the COVID-19 pandemic have taken a large toll on most of Australia’s services industries… The recent easing of restrictions in some locations led to “muted optimism for businesses who responded later in May.”

GfK’s client strategy director Joe Staton said: “with no sign of a rapid V-shaped bounce-back on the cards, consumers remain pessimistic about the state of their finances and the wider economic picture for the year to come”. Meanwhile, “as the lockdown eases, it will be interesting to see just how the consumer appetite for spending returns in a world of socially-distanced shopping and the seismic shift to online retailing.” 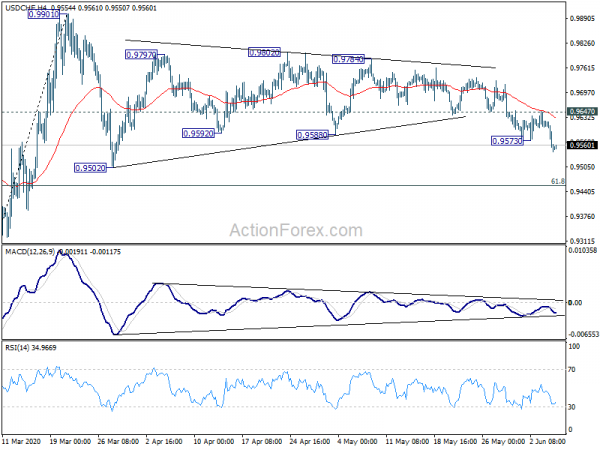 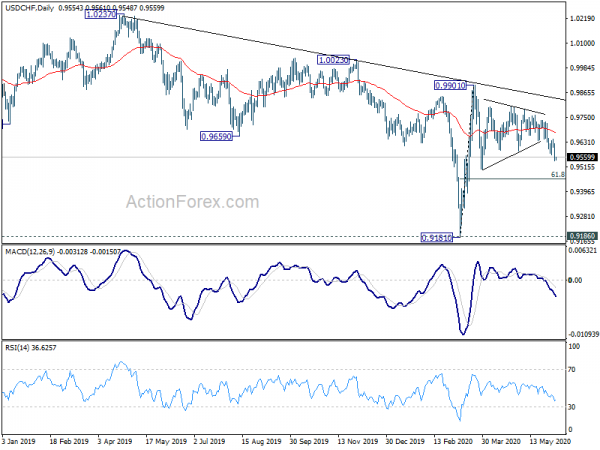