European majors are generally the strong ones this week so far. While Euro and Sterling lost some intraday momentum after yesterday’s rally, they’re both remain firm as supported by solid economic data. ON the other hand, While data from US are not too back, the greenback is being pressured by the political drama in the White House. Aussie is leading commodity currencies down as RBA warned of its recent appreciates in the rate decision statement. In other markets, US futures point to high open as DOW would likely extend the record run. Gold continues to ride on Dollar Weakness and stays firm above 1270. WT crude oil is hovering around 50 for the moment and is trying to find follow through buying above this level. Release from US, person income rose 0.0% in June, below expectation of 0.4%. Personal spending rose 0.1%, in line with consensus. Headline PCE slowed to 1.4% yoy but beat expectation of 1.3% yoy. Core PCE was unchanged at 1.5% yoy, above expectation of 1.4% yoy.

Quick update: ISM Manufacturing missed expectation by 0.1 by dropping to 56.3 in July. But price paid gauge surprised on the upside by rising to 62.0.

UK PMI manufacturing rose to 55.1 in July, up from 54.2, above expectation of 54.5. Markit noted that "UK manufacturing started the third quarter on a solid footing". The PMI indicated a "a growth acceleration for the first time in three months during July, as new order intakes were boosted by a near survey-record increase in new export business." Besides the help from lower Sterling exchange rate, "manufacturers also benefited from stronger economic growth in key markets in the euro area, North America and Asia-Pacific regions." Also, Markit added that "continued expansion is also still filtering through to the labour market, with the latest round of manufacturing job creation among the best seen over the past three years."

Eurozone GDP rose 17 quarters in a row, accelerated in Q2

The economic outlook of Eurozone seems even brighter as GDP growth accelerated to 0.6% qoq in Q2, in line with consensus. That’s the 17 quarters of growth in a row, which started back in early 2013. Also from Eurozone, Germany unemployment dropped -9k in July, larger than expectation of -5k fall. Unemployment rate was unchanged at 5.7%. Eurozone PMI manufacturing was revised down by 0.2 to 56.6 in July. Italy PMI manufacturing dropped 0.1 to 55.1 in July.

As widely anticipated, the RBA left the cash rate unchanged at 1.5%. Policymakers acknowledged that June inflation drifted back below the +2% target but remained confident it would improve gradually alongside the pickup of the economy. Policymakers, however, warned of Australian dollar’s appreciation, suggesting that it would limit economic growth. A reference of the negative impact of strong currency on economic developments reappeared as AUDUSD has risen +5.7% from July’s low of 0.7567. More in RBA Maintained Status Quo, Warned that Strong Aussie is Curbing Growth

China Caixin PMI manufacturing rose to 51.1 in July, up from 50.4, and beat expectation of 50.4. It’s noted in the statement that "panelists widely commented on an improvement in market conditions and strong foreign demand. Notably, new export sales increased at the second-fastest rate since September 2014." New export orders jumped sharply from 50.9 to 53.5, hitting the highest level since February.

Intraday bias in EUR/USD remains on the upside for the moment. Current rise 1.0339 should target 1.2 handle next. Firm break there will pave the way to next key fibonacci level at 1.2516. On the downside, below 1.1722 minor support will turn intraday bias neutral and bring consolidation before staying another rally. 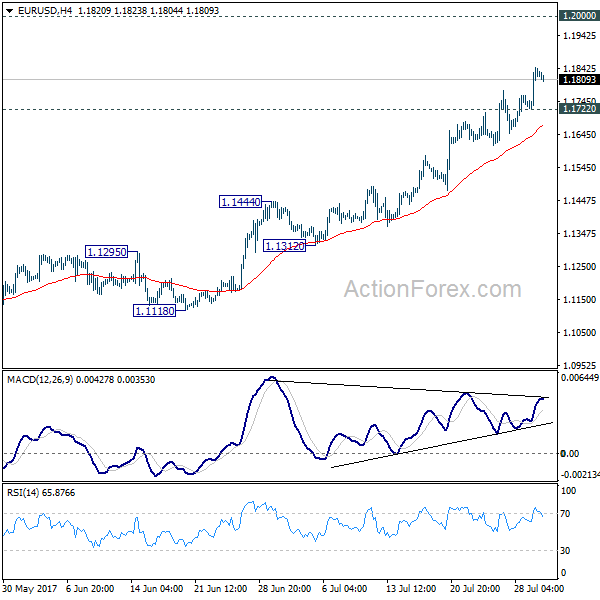 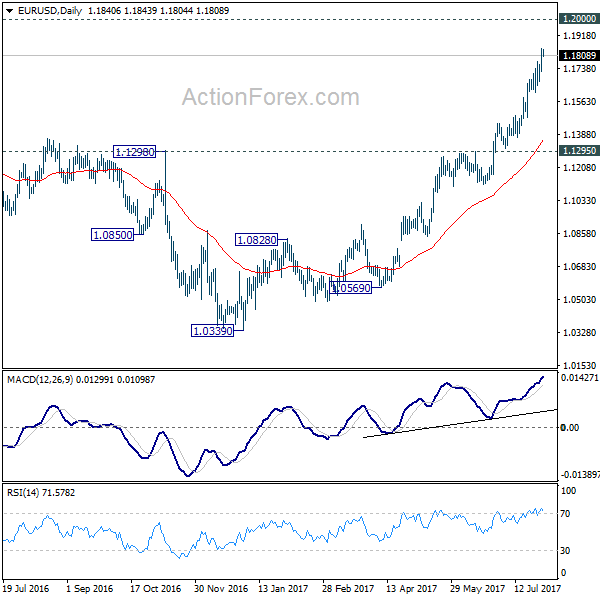