Risk-on trades dominated the US markets overnight, as Fed officials indicated the willingness to keep accommodative measures in place. Yet, sentiments turned mixed in Asian markets. Hong Kong and Chinese stocks are weighed down by US President Donald Trump’s decision to end Hong Kong’s special status, after China imposed national security law by passing the city’s legislature. In the currency markets, Dollar is trading as the worst performing one, followed by Yen and then Swiss Franc. New Zealand Dollar leads commodity currencies higher, followed by Aussie and Canadian. This is a rather typical risk on pattern.

Technically, while DOW’s 556 points looked impressive, the index is actually still bounded in near term consolidation pattern below 27580.21. Repeated support from 55 day EMA is a bullish sign. But there is no indication of rally resumption yet. Dollar will be a focus today after this week’s selloff. EUR/USD will be heading towards key resistance at 1.1496, which is medium term trend defining. AUD/USD is also eyeing 0.7031/7064 resistance zone and firm break there will carry medium term bullish implications. It’s also about time for gold to complete the sideway consolidation from 1817.91, with an upside breakout. 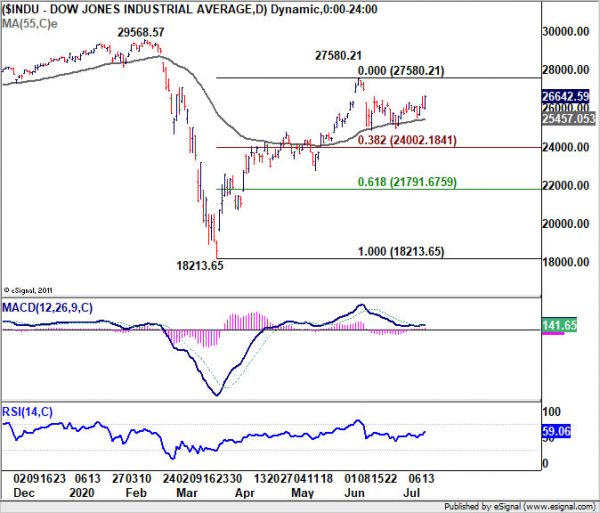 BoJ left monetary policy unchanged as widely expected. Under the Yield Curve Control framework, short term policy interest rate is held at -0.1%. BoJ will also continue to purchase unlimited JGBs to keep 10-year yield at around 0%. It maintained the pledge to continue with QQE “as long as it is necessary” for achieving 2% price target in a stable manner. The decision was made by 8-1 vote, as Kataoka Goushi dissented again, pushing for more stimulus by lowering short and long term interest rates. He also pushed for revising the forward guidance to relate it to price stability target.

In the Outlook for Economic Activity and Prices, BoJ said the economy is “likely to improve gradually from the second half of this year” But the pace is expected to be “only moderate while the impact of the novel coronavirus remains worldwide”. Year-on-year CPI less fresh food is “likely to be negative for the time being”. The projected growth rates and projected CPI in the report are “broadly within the range” or prior forecasts. Nevertheless, outlook is “extremely unclear” with risks “skewed to the downside”.

In the new forecasts: 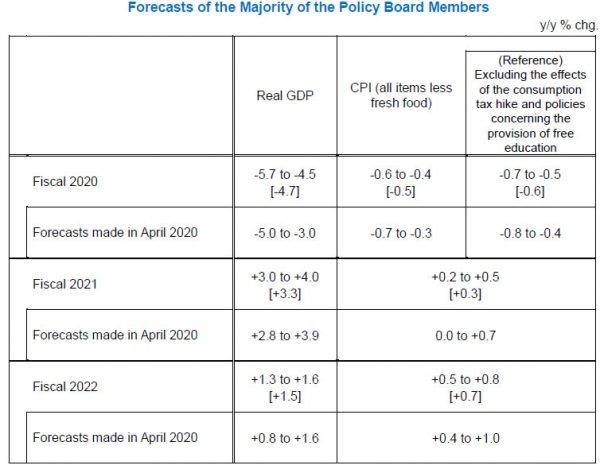 Fed Governor Lael Brainard said in a speech that while employment and activity “rebounded faster and more sharply than anticipated”, ” recent resurgence in COVID cases is a sober reminder that the pandemic remains the key driver of the economy’s course”.

A “thick fog of uncertainty” is still surrounding the US and “downside risks predominate. She added, “the recovery is likely to face headwinds even if the downside risks do not materialize, and a second wave would magnify that challenge.”

The uncertainty is “calling for a sustained commitment to accommodation, along with additional fiscal support.”

Fed Kaplan: We would see a rebound from the deep hole dug in Q2

Dallas Fed President Robert Kaplan said when US get to a “normalized economy” would depend on “the path of the virus” and “how well we manage it, and the timing of the vaccine”. Fed would not need to do as much “if we do an outstanding job and a better job managing the virus”.

He’s optimistic that in 2021, “we will see an above-trend growth and we will continue to grind down the unemployment rate”. And if Americans follow the protocols of handling the coronavirus, “we would see a rebound from the deep hole we dug in the second quarter”.

Separately, Philadephia Fed President Patrick Harker said the effects of the coronavirus pandemic are “proving not to be just a brief setback”. The US economy is in a “downturn that is both exceptionally painful and stubbornly long-lasting.” “There’s both the direct economic impact of businesses having to close down,” he added. “But I also worry about the psychological impact on consumer confidence.”

St. Louis Fed President James Bullard said the US is “certainty past the initial phase of the crisis”. But “the crisis is persistent”. He added that “we need better execution of a granular risk-based health policy, that will be critical to keep the economy out of depression.” His base case was that “we will be able to accomplish this in next six months and come back to a more normal looking U.S. economy,” even though downside risks “remain substantial.”

Bullard also noted that the stock markets were ” optimistic in the May-June time frame”. And “indeed the data came in and validated the market thinking.” “Equity markets are something we don’t usually talk about at the Fed. I think they have been optimistic and they have been right, I think, up to now anyway,” he added.

BoC rate decision is the major focus today. It’s widely expected to keep policy rate unchanged at 0.25%, as well as the asset purchase program. Economic data released since reopening have be encouraging. BoC could sound more optimistic about recovery, while keeping a cautious tone. More in BOC to Turn More Upbeat about Economic Recovery, While Caution about Uncertainty and Keep Monetary Policy Unchanged.

AUD/USD edges higher today but overall outlook is unchanged. We’re seeing price actions from 0.7064 as a consolidation pattern. Strong resistance should be seen from there to limit upside. Break of 0.6922 support will turn bias to the downside to start another falling leg inside the pattern. AUD/USD could target 0.6776 support and below. Nevertheless, sustained break of 0.7064 will resume whole rise from 0.5506 instead. 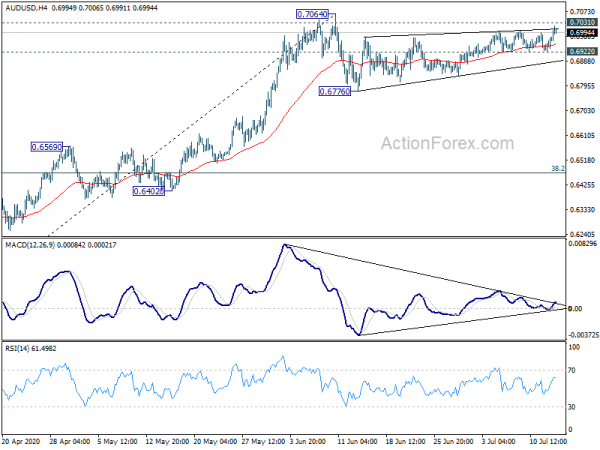 AUD/USD New High Is Shaping Up

Reserve Bank Comfortable With AUD – But For How Long?