Markets are in strong risk-on mode again on coronavirus vaccine hopes. Moderna group said earlier that the vaccine candidate produced a robust immune system response in a large group of people. Next will be a decisive clinical trial in July. Major indices in Asia and Europe record strong gains, except China and Hong Kong. DOW future is also up more than 500pts just ahead of open. In the currency markets, Australian Dollar is currently the strongest one followed by New Zealand and Sterling. Swiss Franc takes the lead lower, followed by Dollar.

Technically, Dollar will be testing key support level against Euro and Aussie very soon. These levels are 1.1496 resistance in EUR/USD and 0.7064 in AUD/USD. Sustained break of these level will medium term bullish implications. Gold is still struggling to break through 1817.91 short term top as sideway trading continues. But any downside acceleration in the greenback could easily push gold through this resistance level.

US Empire State manufacturing rose to 17.2, but 6-month outlook dropped to 38.4

US Empire State Manufacturing index rose to 17.2 in July, up from -0.2, above expectation of 7.85. It’s also the first positive reading since February. However, six-months ahead business conditions dropped -18.1 pts to 38.4, down from 56.5.

The indexes for future new orders and future shipments fell somewhat, but remained near 40. The index for future employment rose to 21.1, suggesting firms expect to increase employment in the months ahead. The capital expenditures index rose to 9.1, a sign that firms, on net, planned to increase capital spending.

Bank of England policymaker Silvana Tenreyro said the UK economic outlook will “continue to depend on the global and domestic spread of COVID-19.” “Assuming prevalence gradually falls, my central case forecast is for GDP to follow an interrupted or incomplete ‘V-shaped’ trajectory, with the first quarterly step-up in Q3,” she added.

She also noted, “we are already seeing indications of a sharp recovery in purchases that were restricted only because of mandated business closures.” “But I think that this will be interrupted by continued risk aversion and voluntary social distancing in some sectors, remaining restrictions on activities in others, and in general, by higher unemployment.”

On monetary policy, she said “I remain ready to vote for further action as necessary to support the economy.”

BoJ left monetary policy unchanged as widely expected. Under the Yield Curve Control framework, short term policy interest rate is held at -0.1%. BoJ will also continue to purchase unlimited JGBs to keep 10-year yield at around 0%. It maintained the pledge to continue with QQE “as long as it is necessary” for achieving 2% price target in a stable manner. The decision was made by 8-1 vote, as Kataoka Goushi dissented again, pushing for more stimulus by lowering short and long term interest rates. He also pushed for revising the forward guidance to relate it to price stability target.

In the Outlook for Economic Activity and Prices, BoJ said the economy is “likely to improve gradually from the second half of this year” But the pace is expected to be “only moderate while the impact of the novel coronavirus remains worldwide”. Year-on-year CPI less fresh food is “likely to be negative for the time being”. The projected growth rates and projected CPI in the report are “broadly within the range” or prior forecasts. Nevertheless, outlook is “extremely unclear” with risks “skewed to the downside”.

In the new forecasts: 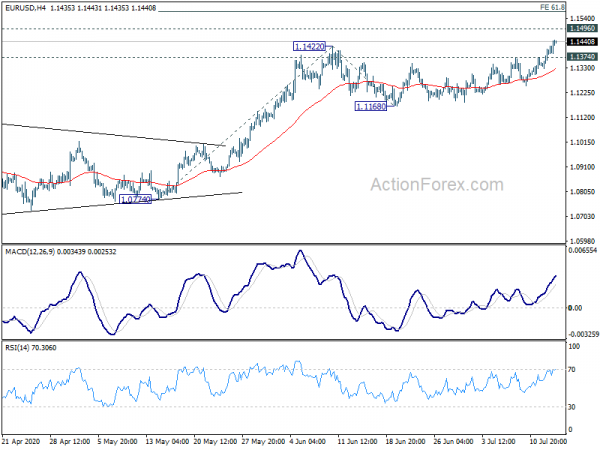 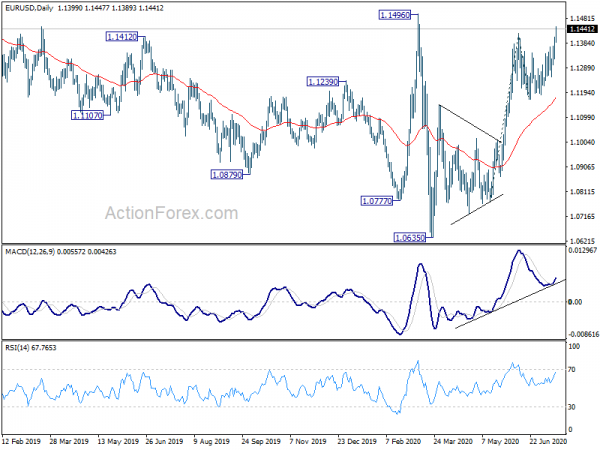