Sterling remain remains the strongest one for today, as it’s maintaining post BoE gains. Nevertheless, there is no apparent follow through buying after the initial surge. On the other hand, Dollar appears to be stabilizing mildly, and it’s receiving some support from better than expected jobless claims. Though, the key for the greenback is still tomorrow’s non-farm payroll data. Meanwhile, Gold is extending recent record run, hitting as high as 2064.85 so far. WTI crude oil retreats mildly but stays above 42 handle.

Technically, EUR/USD seems to be struggling to extend rally above 1.1908 temporary top. But still, near term outlook will stay cautiously bullish as long as 1.1695 support holds. Similarly, outlook in GBP/USD is bullish as long as 1.2982 support holds. For AUD/USD, the equivalent support level is 0.7076. For Gold, break of 2009.40 support is needed to be the first sign of topping.

US initial jobless claims dropped to 1.186k, continuing claims down to 16.1m

BoE Governor Andrew Bailey said the central bank is “ready to act, should that be needed”. However, he added that while negative rates are “part of out tool box”, at the moment, “we do not have a plan to use them.

A “conclusion we tend to be drawing from other experiences is that the negative rates and their effectiveness depends on what point in the cycle you use them,” he explained.  “If you see what the ECB have done in their analysis that probably they are more effective in an established upswing than they are in a difficult downswing.”

On the economic outlook, he emphasized “forecasts can sometimes look beguilingly straightforward”. But “there’s an awful lot of risk in there ad it’s obviously distributed one way.”

BoE left monetary policy unchanged as widely expected. Bank Rate is maintained at 0.1%. The asset purchase target is also held at GBP 745B. Both decisions were made by unanimous 9-0 votes. The Committee “does not  intend to tighten monetary policy until there is clear evidence that significant progress is being made in eliminating spare capacity and achieving the 2% inflation target sustainably.

On the economy, BoE expects UK GDP to have bee over -20% lower in Q2, comparing with Q4 2019. GDP is not expected to exceed Q4 2019 level until the end of 2021. Risks to GDP outlook are skewed to the downside. High-frequency indicators imply that “spending has recovered significantly” since April. Though, business investment is “likely to have fallen markedly in Q2” and investment intentions remain “very weak”.

Unemployment rate is projected to “rise materially” to around 7.5% by year end, “consistent with a material degree of spare capacity. CPI is expected fall further below the 2% target and average around 0.25% in the latter part of the year. But CPI is still expected to return to around 2% in two years’ time.

UK PMI construction rose to 58.1, but employment fell as a faster pace

UK PMI Construction rose further to 58.1 in July, up from 55.3, beat expectation of 57.0. That’s the second straight month of expansion reading, and the best since October 2015. Markit said growth was led by sharp increase in house building. There was modest improvement in new order books. However, employment fell at a faster pace.

Tim Moore, Economics Director at IHS Markit: “Survey respondents noted a boost to sales from easing lockdown measures across the UK economy and reduced anxiety about starting new projects. However, new work was still relatively thin on the ground, especially outside of residential work, with order book growth much weaker than the rebound in construction output volumes.

“Concerns about the pipeline of new work across the construction sector and intense pressure on margins go a long way to explain the sharp and accelerated fall in employment numbers reported during July. This shortfall of demand was mirrored by the fastest rise in sub-contractor availability since November 2010 and another decline in hourly rates charged.”

Australia Morrison: Victoria lock to shrink GDP further by AUD 7B to 9B in Q1

Australian Prime Minister Scott Morrison said Victoria’s stage 4 lockdown could shrink GDP between AUD 7B and AUD 9B in Q3. Overall impacts together with prior imposed restrictions in Melbourne could cost between AUD 10B to AUD 12B, an impact of around 2.5% of GDP. “Treasury’s assessed the impact of these new restrictions and notes there’s a high degree of uncertainty in relation to any of these estimates,” Morrison said. “This is a heavy blow.”

Also, headline unemployment could peak at close to 10%, with real unemployment rate at 13%. “It is estimated — the increase in effective unemployment — to be between 250,000 and 400,000,” Morrison said. “That isn’t necessarily people who have lost their employment, it also includes those whose employment has been reduced to zero hours.”

Intraday bias in USD/JPY remains neutral first. Further rise is mildly in favor as long as 105.20 minor support holds. On the upside, break of 106.47 will re-affirm the case of near term reversal. That is, corrective decline from 111.71 has completed with three waves down to 104.18. In this case, further rise should be seen to 108.16 resistance next. However, on the downside, break of 105.20 minor support will suggest completion of rebound from 104.18. Intraday bias will be turned back to retest this low. 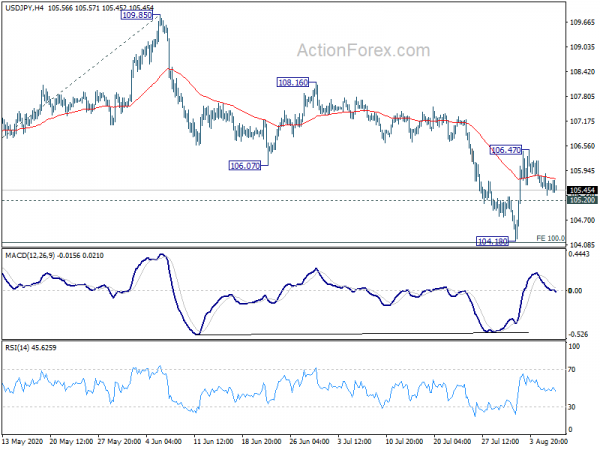 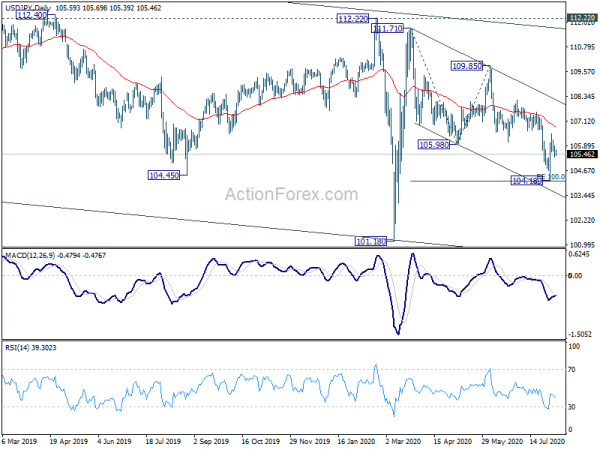