Global markets surge broadly today on more optimism on coronavirus treatment. S&P 500 and NASDAQ are both set to extend recent record runs. Yen and Dollar are back under some selling pressure, but New Zealand Dollar is not far away. On the other hand, Australian Dollar is currently the strongest, followed by Swiss Franc and then Euro. But overall, major forex pairs and crosses are generally bounded inside last week’s range. Breakout is still awaited.

Technically, USD/CAD is the first candidate for downside break out as it’s pressing 1.3133 temporary low. Break there will target 1.3 handle. Gold breached 4 hour 55 EMA briefly but quickly retreated. As long as this EMA now, we’re expect fall from 2015.66, as a down leg of the consolidation pattern from 2075.18, to extend through 1911.43 temporary low. But sustained break of the EMA will likely extend the rise from 1862.55, as the second leg of the consolidation, through 2015.66. Let’s see which way it goes. 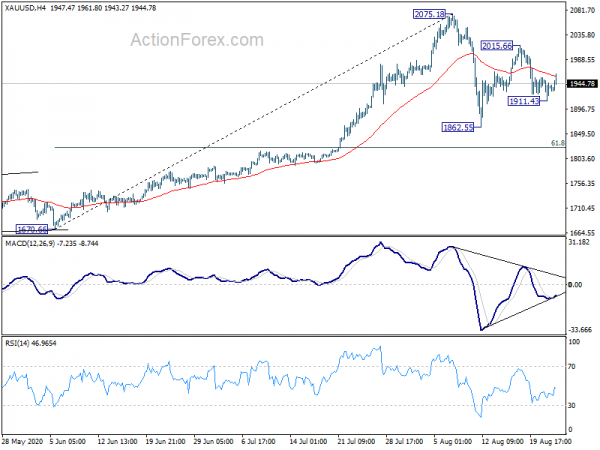 Markets up on rumors of Trump’s fast-tracking coronavirus vaccine

Markets sentiment seemed to be lifted notably by news regarding US President Donald Trump’s move to fast-track UK vaccines on the COVID-19 before election. Financial Times reported that one way is to use an “emergency authorization” in October to a vaccine being developed by AstraZeneca Plc and Oxford University. The use would be based on the results from a relatively small UK study.

White House declined to comment on the report. A Health and Human Services department spokesman said the reports on using EUA before election was “absolutely false”. The administration hoped to have a vaccine available in Q1 2021 instead. AstraZeneca also denied discussion with the government about emergency authorization.

12 of the 15 industries had lower sales over the year too. Some had record decline, and the main movements were: Food and beverage services, down -40%; fuel retailing, down -35%; motor vehicle and parts retailing, down -22%; accommodation, down -44%.

Bank of Korea Governor. Lee Ju-yeol told the National Assembly, “after suffering sharp deterioration, the Korean economy showed some signs of an improvement on eased slumps in exports and consumption.”

But he warned, “as virus cases have recently resurged, the economic recovery is expected to remain weak, and economic uncertainty has further heightened.” “We will also closely monitor changes in financial stability, stemming from growing household debt amid rising home prices and excessive cash inflows to the housing market”.

BOK lowered policy rate to record lower of 0.50% in May. It’s expected to stand pay at the meeting on Thursday. South Korean economy contracted -3.3% qoq in Q2, worst in over two decades.

EUR/USD recovers ahead of 1.1711 support but stays well below 1.1965 resistance. Intraday bias remains neutral first and more consolidations could be seen. Further rise will remain mildly in favor as long as 1.1711 support holds. Break of 1.1965 will extend the whole rise from 1.0635. However, considering bearish divergence condition in 4 hour MACD, break of 1.1711 should confirm short term topping. Intraday bias will be turned back to the downside for 55 day EMA (now at 1.1552). 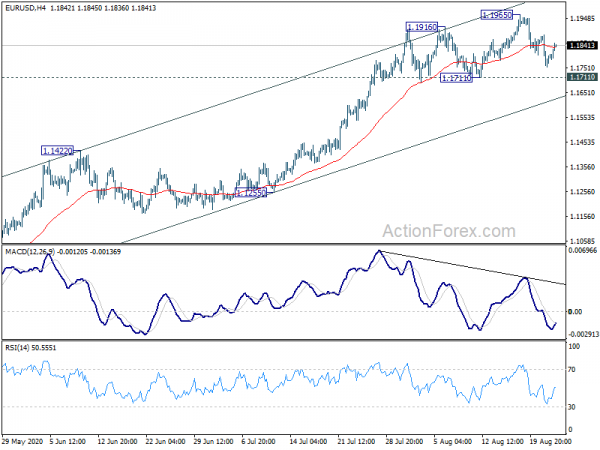 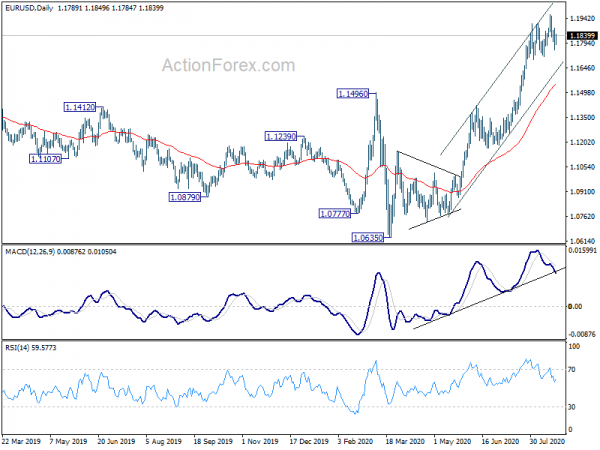