Risk aversion is back in the markets today. On the one hand, US stocks are set to open sharply lower as they return from holiday. Tech rout is continuing with NASAQ futures down more than -3% at the time of writing. On the other hand, no-deal Brexit worries intensify as UK continues with its hard-line rhetorics. Sterling is overwhelmingly the worst performing one today, followed by Canadian Dollar and then Kiwi. Yen is the strongest one, followed by Dollar. 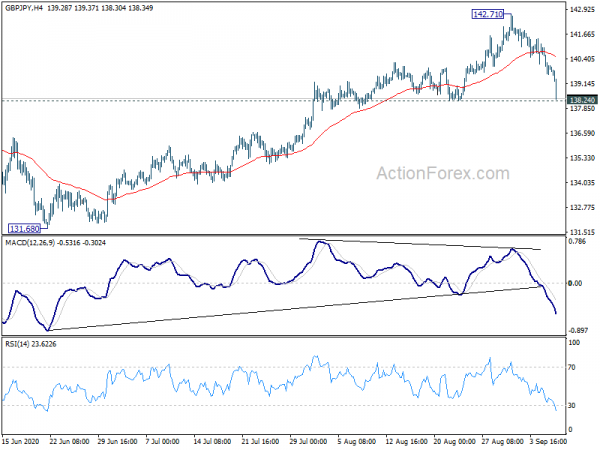 Another development to now is the steep fall in WTI crude oil. 38.58 support is taken out decisively. Fall from 43.50, as a correction to the rebound in the last few months, would target 34.36 support before finding a bottom. 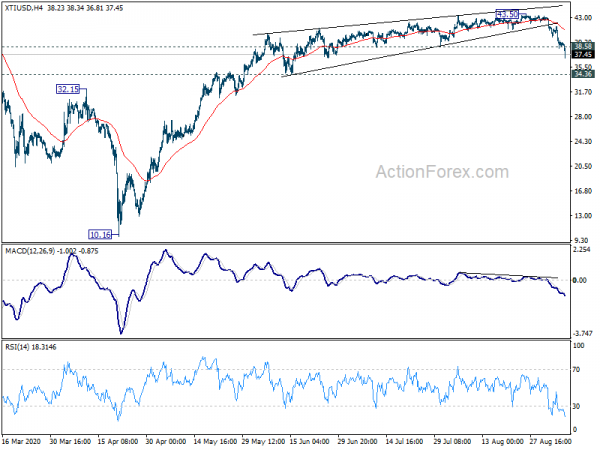 Sterling’s selloff accelerates today as concerns over no-deal Brexit intensifies, while talks between UK and the EU enter into the 8th round. Ahead of that, UK’s chief negotiator David Frost called for “more realism from the EU.

He said in a statement, “we have now been talking for six months and can no longer afford to go over well-trodden ground. We need to see more realism from the EU about our status as an independent country.”

“If they can’t do that in the very limited time we have left then we will be trading on terms like those the EU has with Australia, and we are ramping up our preparations for the end of the year,” Frost added.

Alan Oster, NAB Group Chief Economist said the weakness in conditions was “primarily driven by a deterioration in the employment index – suggesting that while the economy has generally begun to open up, the labour market is still weakening”. The deteriorations was also “broad-based across the states”, suggests that the “virus continues to pose a risk everywhere, not just states with significant containment measures in place”. Confidence also “remains fragile”, still negative. it will “continue to be impacted by news around the virus”

“Given the sheer magnitude of the fall in activity in Q2 and the subsequent lockdowns in Victoria, it’s is likely we will see a protracted recovery and a rise in the unemployment rate before it gets better. Policy makers have provided unprecedented support – but we think there will need to be more. This would help businesses and the economy recover more quickly and the focus can again return to growth”, Oster added.

Economy Minister Yasutoshi Nishimura said “the economy was in a severe state in April-June because we intentionally halted activity to contain the coronavirus “. Nevertheless “it has recently shown signs of picking up”.

“Some positive corporate spending to adapt to a new lifestyle is seen, such as capex to boost production capacity, spending on telecom equipment,” he added. On the other hand, “household income is rising so the economy likely to continue recovering but must watch impact on the renewed rise in infection numbers, hot temperatures on consumption.”

GBP/USD’s decline accelerates to as low as 1.3020 so far today. The break of 1.3053 support confirms short term topping at 1.3482. Intraday bias is back on the downside and deeper fall should be seen through 55 day EMA to 38.2% retracement of 1.1409 to 1.3482 at 1.2690. Reactions from there will decide whether it’s a corrective decline or reversal. On the upside, above 1.3184 minor resistance will turn intraday bias neutral first. 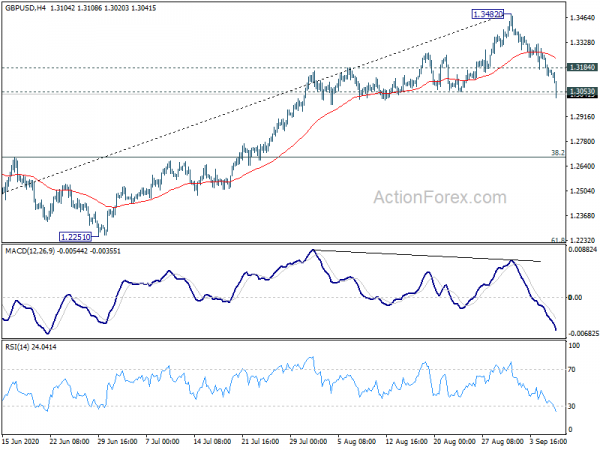 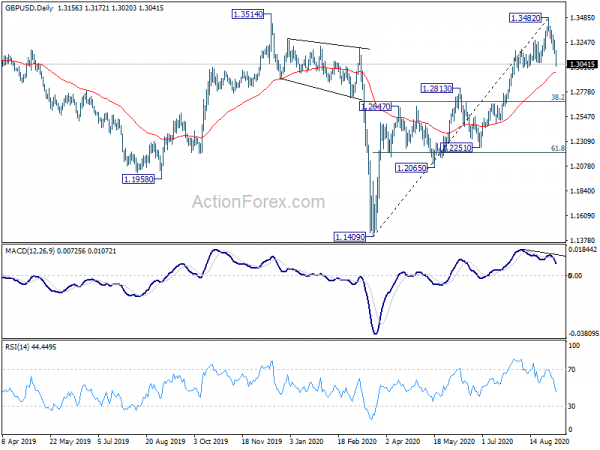