Dollar is back trading as the weakest one for the week as it’s earlier rally attempt faded quickly. Though, Euro and Swiss Franc are not too far behind as the next weakest. Yen is also paring some of this week’s gain but remains generally firm. New Zealand Dollar is surprisingly the strongest one for the weak so far. Sterling is the second strongest as it quickly pared back post BoE losses. Overall, there is no clearly commitment in a direction in the forex markets.

Technically, NASDAQ is worth a watch today as it’s back pressing this week’s low after the -1.27% decline overnight. Further fall could sent the index firmly through 55 day EMA. That could confirm the start of a correction to rise from 6631.42 to 12074.06, and target 38.2% retracement at 9994.97, which is close to 10000 handle. That might result in further decline in Yen pairs in generally. In particular, that might finally drag USD/JPY through 104.18 low.

UK Retail sales rose 0.8% mom in August, above expectations of 0.7% mom. Over the year, sales rose 2.8% yoy, below expectation of 3.0% yoy. That’s the fourth consecutive month of growth, resulting in an increase of 4.0% comparing with February’s pre-pandemic level.

UK CBI found in a survey that 51% of firms are expecting to maintain or increase their permanent recruitment in the coming 12 months. At the same time, 46% are planning to either reduce permanent recruitment of not recruit at all. The balance of +5% was sharply lower than +56% in the survey last ear.

Matthew Fell, CBI Chief UK Policy Director, said: “The UK labour market has been under heavy stress since the outset of the Covid-19 crisis and, although the economy has started to re-open, pressure on firms remains acute… We are seeing a two-speed recovery. While some firms are already looking at creating new jobs, most others are in survival mode.”

Japan CPI core (all items less fresh food) dropped to -0.4% yoy in August, down from 0.0% yoy, matched expectations. It’s the lowest readings in nearly four years, matching the low seen in November 2016. All item CPI slowed to 0.2% yoy, down form 0.3% yoy. CPI core-core (all items less fresh food and energy) turned negative to -0.1% yoy, down form 0.4% yoy. Downward pressure is generally expected on prices, which might send core CPI to as low as -1.0% later this year.

Separately, according to a telephone poll by Kydo news 66.4% of the public support new Prime Minister Yoshihide Suga’s cabinet. A survey by Nikkei newspaper and TV Tokyo showed 74% support. Suga is generally expected to follow most a large part of Abenomics as his economic policies.

Oil prices surged overnight after OPEC+ urged members to conform with production cuts in an online meeting yesterday. “The JMMC reiterated the critical importance of adhering to full conformity and compensating overproduced volumes as soon as possible,” OPEC officials said.

WTI extends the rebound from 35.98 to as high as 40.73 so far. Further rise is expected towards 43.50 resistance. At this point, we’re not expecting a firm break there. 43.75 is seen as a medium term top with subsequent price actions seen as developing into a sideway consolidation pattern. Break of 39.37 will start a third leg, a down leg, in the pattern. 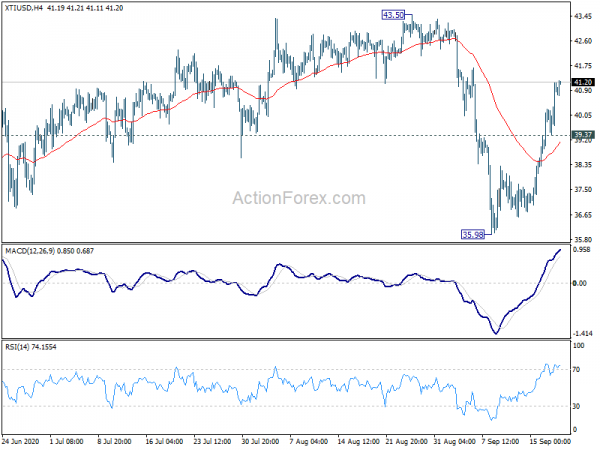 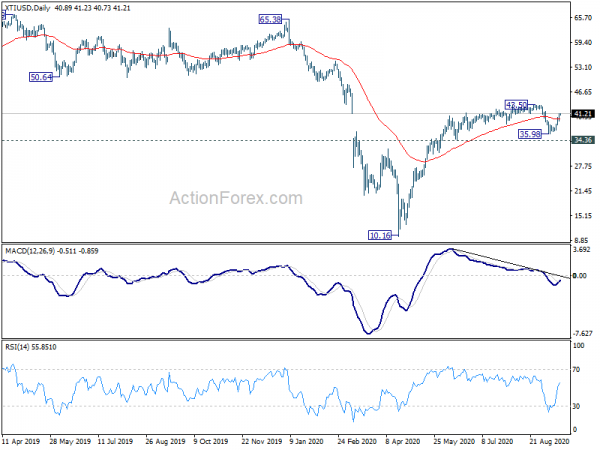 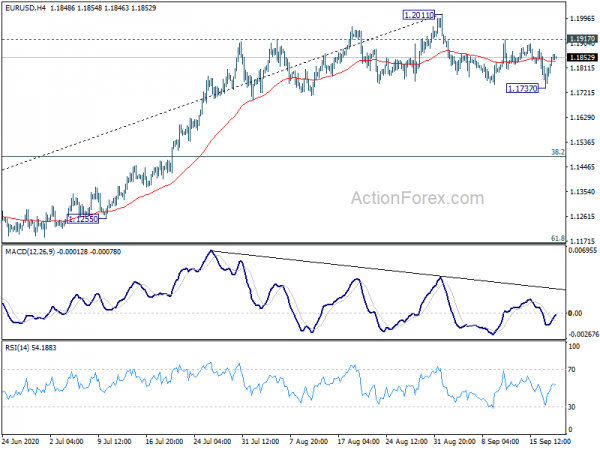 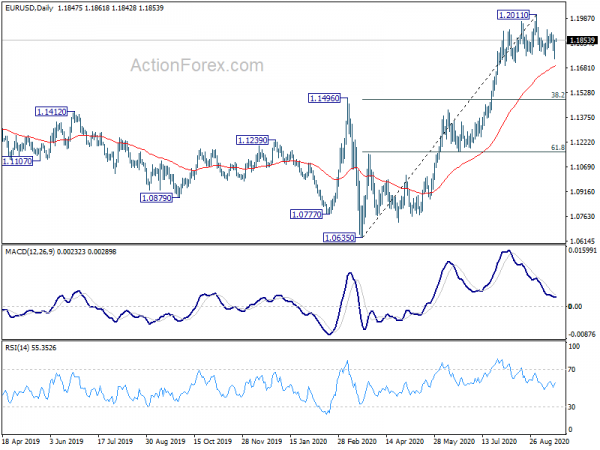