Risk aversion continues to dominate the markets, on concern of another wave of coronavirus infects, as the Northern Hemisphere is entering in fall and winter. US stocks closed notably lower after brief initial rebound. Asian markets follow with heavy selling, with major indices in deep red. In the currency markets, commodity currencies are extending decline as weakest ones. Dollar and Yen are the strongest, with the greenback having an upper hand for now.

Technically, Australian Dollar is worth a note, with the selloff accelerating on speculation of October RBA cut. In particular, EUR/AUD is now eyeing 1.6586 key near term resistance. Decisive break there would confirm completion of the fall from 1.9799 at 1.6033, and open up more sustainable rebound. AUD/CAD is also eyeing 0.9409 support and break will confirm the start of the correction to rise from 0.8066 to 0.9696. Deeper fall could then be seen to 38.2% retracement at 0.9073. Such developments could further affirm the turn in Aussie’s fortune. 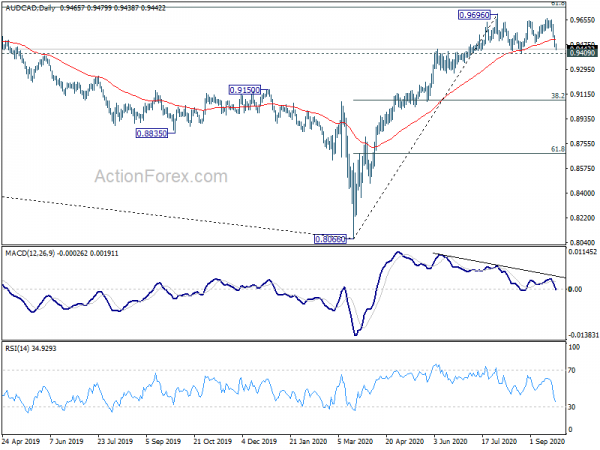 Minutes of BoJ’s July 14/15 meeting showed policymakers are concerned with resurgence of coronavirus in Japan. A few board members noted, “infection numbers are increasing at a faster pace globally, so we need to be on alert of the possibility of a re-insurgence including in Japan”. Another member warned, “if infection numbers rise again, the timing of an economic recovery will be delayed.”

Overall, members agreed “the economy, with economic activity resuming, was likely to improve gradually from the second half of this year; however, the pace of improvement was expected to be only moderate while the impact of COVID-19 remained worldwide.”

New Zealand exports rose 8.6% yoy in NZD 4.4B in August. Imports, on the other hand, dropped sharply by -16% yoy to NZD 4.8B. The monthly trade balance was a deficit of NZD -353M, slightly larger than expectations.

Imports were down from all top trading partners, including China, EU, Australia, USA and Japan. But there were contrasting movements in exports, up to China, USA and EU, but down to Australia and Japan.

Boston Fed President Eric Rosengren warned that “the economy remains fragile”. He’s concerned that a second wave of coronavirus infections this fall and winter is “likely” which could cause some states to “impose new restrictions on mobility and face-to-face interactions”. Additionally, additional fiscal support “seems unlikely to materialize any time soon”.

“It would have been fine if the pandemic lasted three months, but the pandemic isn’t lasting three months,” Rosengren said. “It’s lasting much longer than that and so there’s definitely a need for more targeted spending.”

Chicago Fed President Charles Evans said yesterday, “I do not fear stronger accommodation in the pursuit of clearly overshooting 2%, even to the point of 2-1/2, or even a little bit more”. Inflation at 2.5% for some time is “in the cards” if Fed is doing its job right.

As for monetary policy, Evans said it’s premature to ramp up Fed’s asset purchases at this point. Fed should wait until the economy gets into better shape, including having unemployment closer to 6%, while consumers are more comfortable spending their money. When that happens, “we would have a better idea of the right amount of accommodation and the way to deliver it,” Evans said.

Fed Governor Randal Quarles said yesterday, “although we have seen the beginnings of a strong recovery, even optimistic forecasts suggest that it will take a long time to recover fully from this shock.”

“By providing additional monetary policy accommodation through stronger, outcomes-based forward guidance, the hopes to quicken the pace of the recovery,” he added.

SNB rate decision is a major focus in European session. We expect SNB to leave the policy rate unchanged at -0.75%. While it does not rule out the possibility of further rate cut, the central bank’s main tool is FX intervention to curb excessive strength in Swiss franc. Economic contraction in 2Q20 turned out to be less severe than expected. Leading indicators also suggest that recovery is underway. However, inflation has remained weak. There will only be mild adjustments, if any, in SNB’s updated economic projections. More in SNB Preview : FX Intervention the Key Monetary Policy Tool to Curb CHF’s Strength

Germany Ifo business climate will be another focus from Europe. Later in the day, US will release jobless claims and new home sales.

AUD/USD’s decline accelerates to as low as 0.7038 today and intraday bias remains on the downside. Current fall is seen as correcting whole rise from 0.5506 to 0.7413. Deeper decline would be seen to 38.2% retracement of 0.5506 to 0.7413 at 0.6685. On the upside, break of 0.7192 support turned resistance is needed to indicate completion of the fall. Otherwise, near term outlook will now stay bearish even in case of recovery. 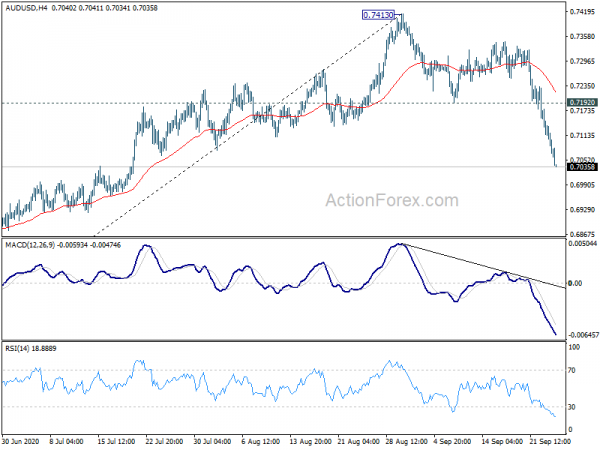 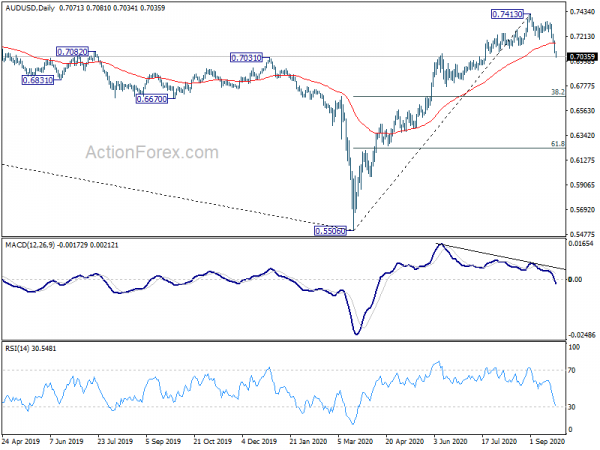