Australian Dollar drops broadly today after RBA hints at more monetary easing next month. It’s also weighed down by mixed job data, as well as weaker risk sentiments. It now appears that US politicians won’t agree to a new stimulus deal before election. US stock indices struggled to get through record highs while Asian markets also weaken. As for today, Euro is the stronger one followed by Swiss Franc. Over the week, Yen and Dollar are now the strongest while Aussie and Euro are the weakest.

Technically, Aussie is starting to look vulnerable as AUD/CAD appears to be taking out 0.9409 support decisively. That would confirm the start of a correction to rise from 0.8066 to 0.9696, targeting 38.2% retracement. After some unexpected volatility, AUD/NZD should also be resuming the corrective fall from 1.1043 towards 1.0565 support. 0.7095 support in AUD/USD would be watched to confirm return of near term bearishness. But the big level would be the 1.6586 resistance in EUR/AUD. 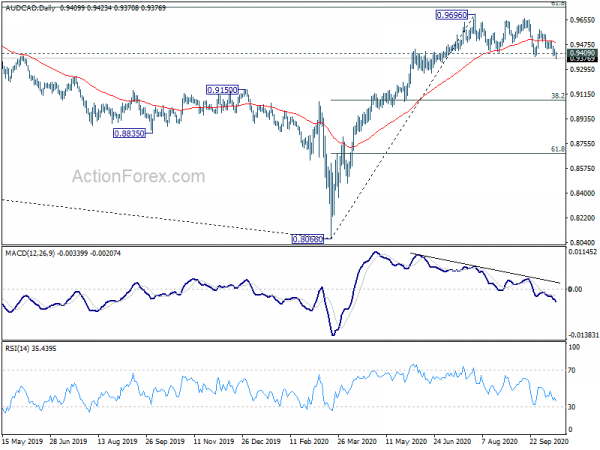 RBA Governor Philip Lowe hinted in a speech that the central bank is ready for deliver more monetary easing in the upcoming meeting in November. He noted that “as the economy opens up, though, it is reasonable to expect that further monetary easing would get more traction than was the case earlier.”

Lowe also noted that that financial stability considerations “have changed somewhat”. To the extent that an easing of monetary policy helps people get jobs it will help private sector balance sheets and lessen the number of problem loans. In so doing, it can reduce financial stability risks.”

Also, while RBA’s balance sheet has “increased considerably” since March, “large increases have occurred in other countries. RBA is “considering the implications os this as we work through out own options”.

Lowe’s comments are in line with market expectations of another cut in cash rate to 0.10%, with expansion of asset purchases to longer maturities.

US Mnuchin still far apart with Democrats on fiscal stimulus

US Treasury Secretary Steven Mnuchin indicated in an interview that he’s still “far part” with the Democrats on the next fiscal stimulus deal. Politics were “part of the reality” and an agreement is unlikely before US election, even though he will keep trying.

“The president has said to me, keep at this until you get this done,” Mnuchin told Fox Business Network. “If we don’t get it now, when the president wins the election we’ll get it passed quickly afterwards.”

Drew Hammill, deputy chief of staff for House Speaker Nancy Pelosi, said the talks between Mnuchin and Pelosi were “productive”. Staff would continue to “exchange paper” and the two will speak again on Thursday.

Dallas Fed President Robert Kaplan expects the US economy to contract -2.5% this year, and grow around 3.5% next. Unemployment is expected to end the year between 7% and 7.5%. However, unemployment may not drop back below 4% until 2023.

Kaplan is concerned that “many of the folks who have lost their jobs may not have a business to go back to.” “We’re going to have a lot of work to do to get these underrepresented groups that have been disproportionately affected back into the labor force.”

Swiss will release PPI in European session. Canada will release ADP employment later in the day. US will release Empire State and Philly Fed manufacturing, jobless claims and import prices. 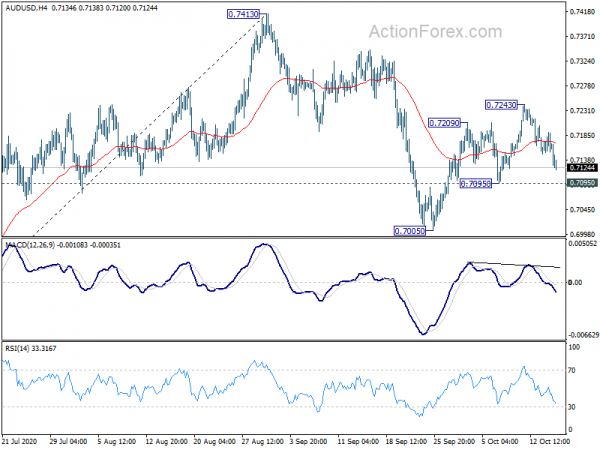 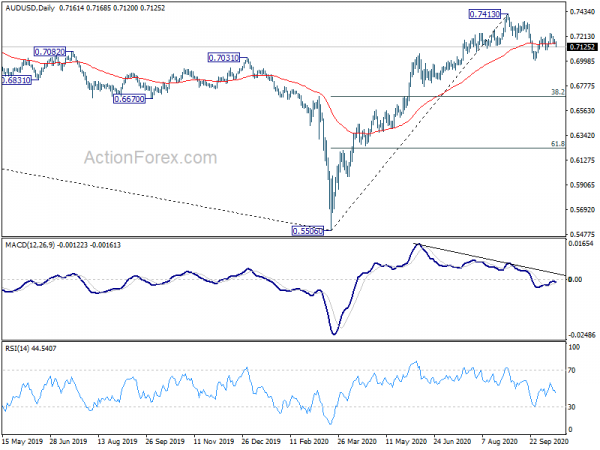