Dollar is under some selling pressure since overnight as US politicians were still optimistic in closing a fresh stimulus deal by election. This appears to be the most volatility triggering theme for the near term for now. Commodity currencies are trying to recover in Asian session today but Aussie and Kiwi remain the weakest for the week, along with the greenback. Euro and Swiss Franc continue to stay firm and remain the strongest ones.

Technically, near term outlook for Dollar turned more negative with EUR/USD’s break of 1.1830 resistance. USD/CAD is also now eyeing 1.3099 support and break will bring retest of 1.2994 low. Gold is again one to watch to confirm Dollar’s selloff. It’s staying in range below 1933.17 resistance despite rising slightly. We’d prefer to see a strong break of 1933.17 to confirm Dollar weakness in general. 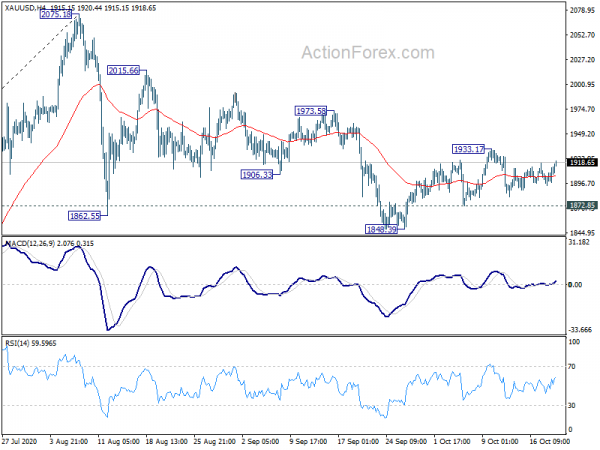 Australia Westpac Leading Index rose to -0.48% in September, up from -2.28%. While still negative, the index is now well above the low seen in H1, when it tumbled to well below -5% due to coronavirus shock. The index is now in line with the average recorded over the 12 months prior to the pandemic.

On RBA rate decision on November 3, Westpac continues to expect cut in both cash rate and three year yield target from 0.25% to 0.10%. RBA is expected to introduce an open ended commitment to buy government and semi-government bonds out along the maturity spectrum to 10 years.

According to preliminary estimate, Australia retail sales dropped -1.5% mom , or -AUD 448.6m, in September. Sales were down in all state and territories except for Northern Territory. Victoria, which was in severe lockdown, recorded a small monthly decline in sales, but remains the only state to be trading below the level the same month last year.

BoJ board member Makoto Sakurai noted that prices in Japan were coming “under strong pressure” and inflation “may not accelerate much” even after prices growth turned positive. Though, it’s not something “unique to Japan”, but a “common problem” for major advanced economies.

Sakurai reiterated that BoJ’s pledge to maintain an accommodative monetary policy stance was playing a critical role in support the economy. The central bank “must underpin inflation expectations”, and “ensure they are in positive territory.

“At present, financial institutions have sufficient capital so there is no big concern over Japan’s banking system. But we need to be prepared to take swift action, with a close eye both on the economy and the banking system,” he also noted.

Chicago Fed President Charles Evans expected recovery momentum to continue into next year. He’s “reasonably optimistic that unemployment rate will fall to 5.5% by the end of next year. Also, he put “less weight on  the adverse economic consequences of a second or third wave” of coronavirus infections. The US seemed to be “powering through this no matter  how adverse and horrific those consequences are”.

But he also emphasized the need for fiscal support even though that’s “kind of counter cultural” for monetary policy makers to say so. “This is a public health safety shock. This is a lot about confidence of consumers, households and businesses being able to go out and do commerce. We really need fiscal and public health authorities to be supporting and improving the economic environment,” he added.

UK inflation data will be the main feature in European session with CPI, RPI and PPI. Later in the day, Canadian data will take center stage with retail sales and CPI. Fed will also release Beige Book economic report.

EUR/USD’s break of 1.1830 resistance suggests resumption of rebound from 1.1612. Intraday bias is back on the upside and further rise would be seen to retest 1.2011 high. We’d be cautious on strong resistance from 1.2011 to limit upside, to bring another falling leg to extend a consolidation pattern. But strong break there would resume larger rally from 1.0635. On the downside, break of 1.1759 minor support will turn intraday bias neutral again first. 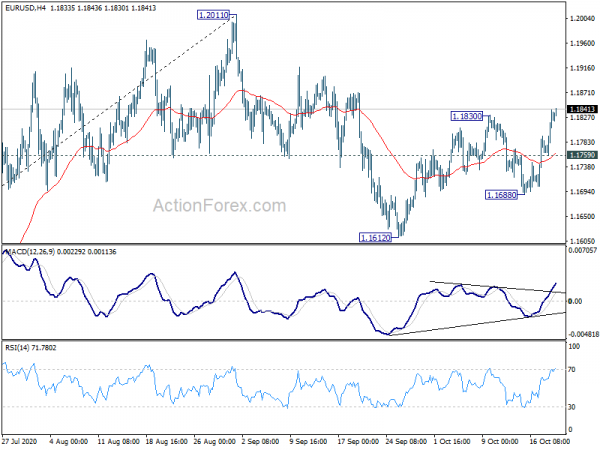 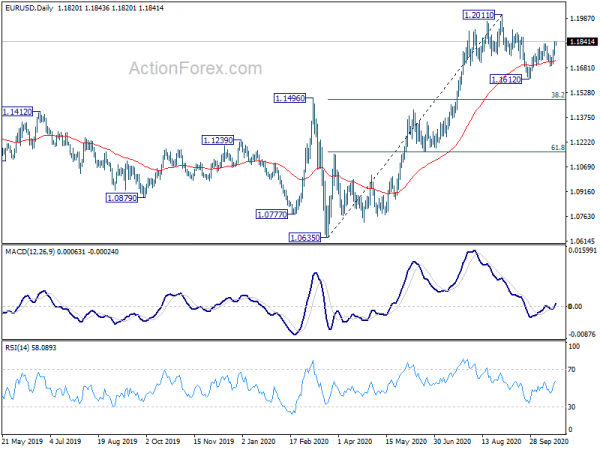