Dollar tumbles sharply today together with US treasuries. 10-year yield breaks above 0.8% handle but that’s giving no support to the greenback. Instead, in a rather unusual development, Yen surges sharply at the same time. Stock futures are just steady. There are talks about the renewed hope for a stimulus deal. But we suspect that there are some funds moving out of the US due to political uncertainties with upcoming Presidential elections. As for today, Canadian Dollar is the second weakest, following the greenback. Sterling is the strongest one, followed by Kiwi and then Yen.

Technically, USD/JPY’s strong break of 104.94 support revives near term bearishness, suggesting that larger down trend is resuming through 104.00 low. GBP/USD also has a bullish range breakout, finally, with help from EUR/GBP’s rejection by 0.9162 resistance. We’ll see if Gold could break through 1933.17 to nail the general bearishness for Dollar. 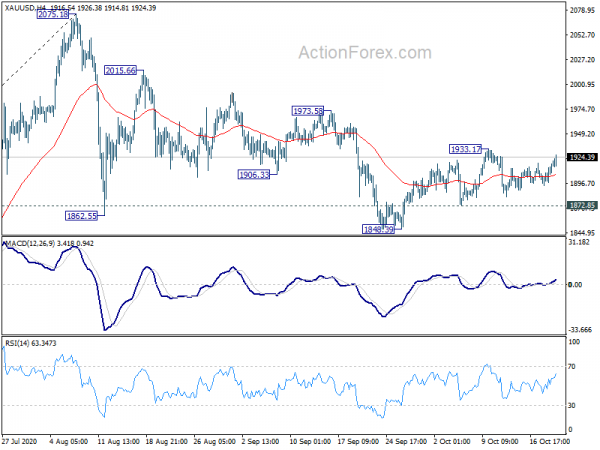 In a speech, BoE Deputy Governor Dave Ramsden talked about “the Monetary Policy Toolbox in the UK“. QE is an “effective tool” for stimulating demand for 11 years of its use in the UK. There is “headroom” remaining and it’s a “tried and tested tool” as “marginal policy tool at present”. Forward guidance is another tool that currently “reflects the ongoing uncertainties” and it means the “burden of proof for any future tightening is high”.

He also reiterated that negative policy rates at this time could be “less effective a tool to stimulate the economy”. But they’re “certainly in the toolbox for potential use in future”. In his own areas of responsibility, Ramsden is working to “ensure all our systems would be able to handle negative rates if needed”.

In these uncertain times, and with an array of risks to contend with, from Covid, from Brexit and from wider geopolitical developments, the MPC is clear that the range of actions that could be taken remains under review,” he added”. “I head into our upcoming meetings in the belief that we are equipped with an effective set of tools in out tool box”.

Australia Westpac Leading Index rose to -0.48% in September, up from -2.28%. While still negative, the index is now well above the low seen in H1, when it tumbled to well below -5% due to coronavirus shock. The index is now in line with the average recorded over the 12 months prior to the pandemic.

On RBA rate decision on November 3, Westpac continues to expect cut in both cash rate and three year yield target from 0.25% to 0.10%. RBA is expected to introduce an open ended commitment to buy government and semi-government bonds out along the maturity spectrum to 10 years.

According to preliminary estimate, Australia retail sales dropped -1.5% mom , or -AUD 448.6m, in September. Sales were down in all state and territories except for Northern Territory. Victoria, which was in severe lockdown, recorded a small monthly decline in sales, but remains the only state to be trading below the level the same month last year.

BoJ board member Makoto Sakurai noted that prices in Japan were coming “under strong pressure” and inflation “may not accelerate much” even after prices growth turned positive. Though, it’s not something “unique to Japan”, but a “common problem” for major advanced economies.

Sakurai reiterated that BoJ’s pledge to maintain an accommodative monetary policy stance was playing a critical role in support the economy. The central bank “must underpin inflation expectations”, and “ensure they are in positive territory.

“At present, financial institutions have sufficient capital so there is no big concern over Japan’s banking system. But we need to be prepared to take swift action, with a close eye both on the economy and the banking system,” he also noted.

USD/JPY’s strong break of 104.94 support suggests that rebound from 104.00 has completed with three waves up to 106.10. That came after rejection by falling 55 day EMA. The development argues that larger fall from 111.71 is not completed, and it might be resuming. Intraday bias is back on the downside for retesting 104.00 first. Break will confirm and target 101.18 low. Though, break of 105.03 minor resistance will turn bias neutral first. 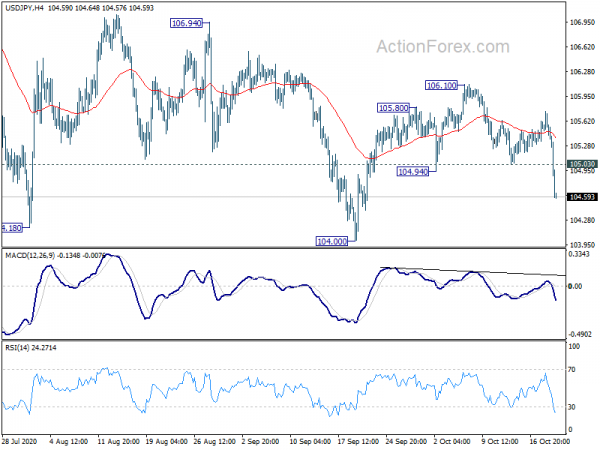 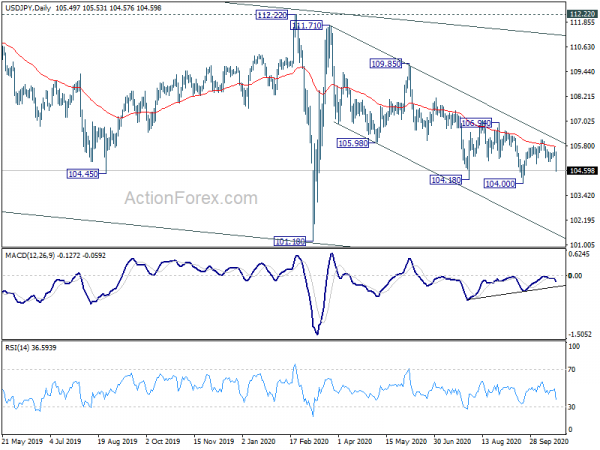