Roller-Coaster Ride Started Even Before US Election Results

Much volatility was seen in the financial markets in the past 24-hours, as traders were pre-trading US elections results. At the time of writing, the race between Donald Trump and Joe Biden is very tight, totally different from the picture portraited by most main steam media. Overall picture in the forex market is very mixed with Dollar and Yen as the strongest ones for today, but weakest for the weak. Commodity currencies are the weakest for today so far, but strongest for the weak. More time is needed to have a firm answer on who’ll be the next US President, and the next direction in the markets.

Technically, Gold has been impressively calm despite the rides elsewhere. We’ll keep an eye on gold to double confirm the moves in the forex markets. In short, firm break of 1933.17 resistance in Gold will be Dollar bearish. Sustained break of 1848.39 support will be Dollar Bullish. 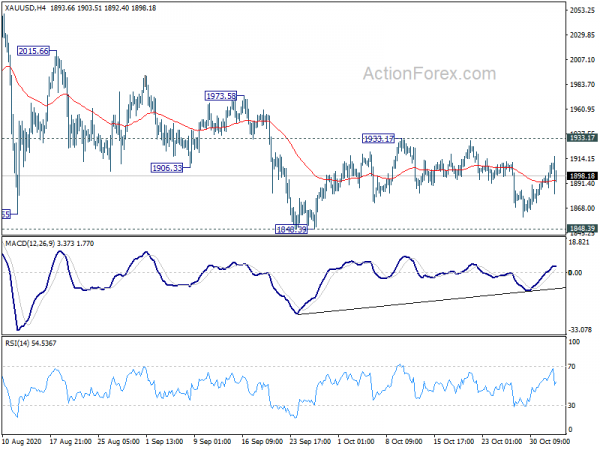 BoJ Governor Haruhiko Kuroda emphasized in an online meeting with business leaders, “it’s extremely important to keep exchange-rate moves stable.” “As a central bank, we won’t act directly to stabilise markets,” he added. “But we of course will work closely with financial authorities and overseas central banks to help keep currency moves stable.”

Kuroda also noted that “the spread of COVID-19 has not subsided globally, including Europe and the United States, and public health measures have been tightened in European countries… Under these circumstances, the consequences of COVID-19 and the magnitude of their impact on domestic and overseas economies are highly unclear.”

Released from Japan, monetary base rose 16.3% yoy in October, versus expectation of 14.5% yoy.

Wang Zhe, Senior Economist at Caixin Insight Group said: “Overall, as the domestic epidemic situation stabilizes, recovery remained the main economic theme…. The development of the epidemic in Europe and the U.S. is still an uncertain factor affecting economic trends. In the coming months, a continued recovery of the Chinese economy is highly likely, but it is necessary to be cautious about the normalization of monetary and fiscal policies in the post-epidemic period.”

New Zealand unemployment rate jumped to 5.3% in Q3, up from Q2’s 4.0%, but was slightly better than expectation of 5.4%.The 1.3% jump was the biggest quarterly increase on record. Labor force participation rate rose 0.2% to 70.1%. Employment dropped -0.8% over the quarter, matched expectations. 37k more New Zealanders were unemployed, bringing the total to 151k, highest in eight years.

“We are continuing to see the economic effects of COVID-19, and its associated border and business closures,” labour market and household statistics senior manager Sean Broughton said. “Last quarter’s low unemployment rate of 4.0 percent was explained in part by people’s inability to be ‘actively seeking’ and available for work during the national lockdown that was in place for much of the quarter. This quarter’s increase in unemployment reflects a return to more normal job-hunting behaviours.”

AiG Performance of Construction Index rose to 52.7 in October, up from 45.2. It’s the first expansionary result since August 2018. 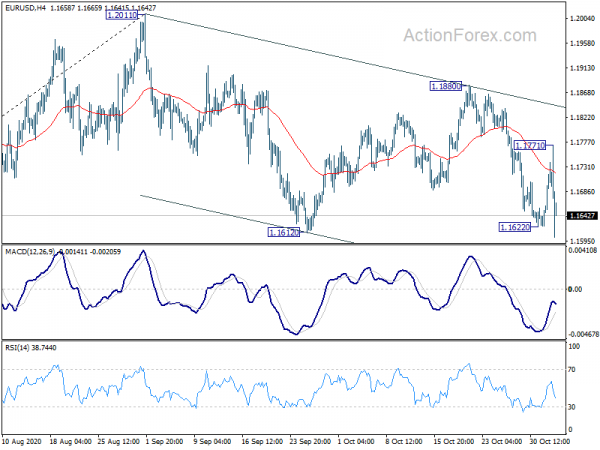 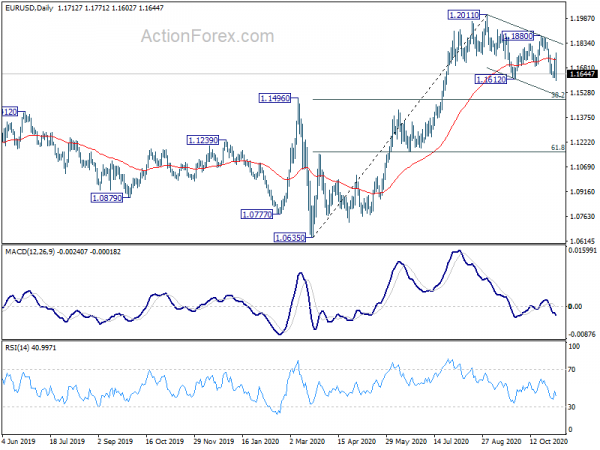