Sterling surges broadly today, as traders apparently cheers Prime Minister Boris Johnson’s defeat in the Lords regarding his internal market bill. But the forex markets are relatively quiet elsewhere. New Zealand Dollar is currently the second strongest, following the Pound. Swiss Franc is the weakest, followed by Canadian and then Dollar. US futures are mixed, with DOW pointing high while NASDAQ is down. The boost from vaccine optimism faded rather quickly while traders are awaiting fresh inspirations.

Technically, 0.8866 support in EUR/GBP is a major focus now after the cross reaccelerates downwards. Decisive break there would indicate completion of whole choppy rise from 0.8670 and pave the way to retest this support. Such development could be accompanied by further acceleration in GBP/JPY towards 142.71 resistance. We’ll see if Sterling could really ride on the current wave of buying. 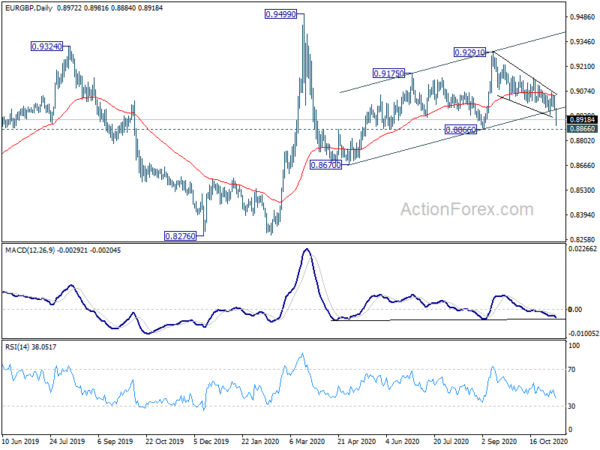 Sterling jumps sharply after UK House of Lords voted against the controversial part of a bill that perceived as breaching Brexit Withdrawal Agreement. The Lords voted 433-165 to pass an amendment to the internal market bill removing measures that see to disapply some of the Northern Ireland protocol. 44 tory rebels were among those voted for the amendment.

Prime Minister Boris Johnson’s spokesperson insisted that the clauses “clauses represent a legal safety net to protect the integrity of the UK’s internal market and the huge gains of the peace process.” The government twill retable these clauses when the bill returns to the House of Commons, which backed the bill by 340 to 256 before.

UK claimant count dropped -29.8k in October, much better than expectation of 78.8k rise. That’s a monthly decrease of -1.1% to 2.6million. However, the level was still 112.4% above March’s number before the pandemic hit the job market.

German ZEW dropped to 39 in Nov, worries over recession

ZEW President Achim Wambach: “Financial experts are concerned about the economic impact of the second wave of COVID-19 and what this will entail. The ZEW Indicator of Economic Sentiment has therefore once again significantly decreased in November, indicating a slowdown of economic recovery in Germany. There is also the additional worry that the German economy could head back into recession. According to the assertions made by the experts, neither the Brexit negotiations nor the outcome of the US presidential election currently are having an impact on the economic expectations for Germany.”

Japanese Economy Minister Yasutoshi Nishimura said the cabinet is instructed by Prime Minister Yoshihide Suga to compile a new stimulus package as soon as possible. In particular, Nishimura said, “we’ll want to consider government spending that will attract private investment.” Also, the measures will focus on shifting to a “green society”. For now, the size of the new package hasn’t been decided yet.

Finance Minister Taro Aso said the pace of recovery in private demand was fast, as seen in the automotive sector.

Australia NAB Business Confidence jumped and turned positive to 5 in October, up from September’s -4. It’s also the highest reading since mid-2019. Business confidence recorded just slight improvement from 0 to 1. Looking at some details, trading conditions rose from 4 to 8. Profitability rose from 1 to 4. But employment remained negative, ticked higher from -6 to -5.

NAB said: “The survey continues to show that the economy has rebounded from the sharp fall in activity in H1 2020 and will likely continue to recover as the economy reopens. However, it will likely take some time for activity to fully recover, with capacity utilisation restored and the pipeline line of work replenished. The improvement in confidence is encouraging but remains fragile, and it will likely remain that way until a vaccine is available. In the interim, confidence will be an important factor for how quickly businesses expand employment and capex as demand normalises.”

Intraday bias in GBP/USD remains on the upside at this point. Sustained break of channel resistance (now at 1.3629) will indicate upside acceleration and pave the way to retest 1.3482 high. On the downside, break of 1.3118 minor support support will turn bias back to the downside for 1.2853 support instead. 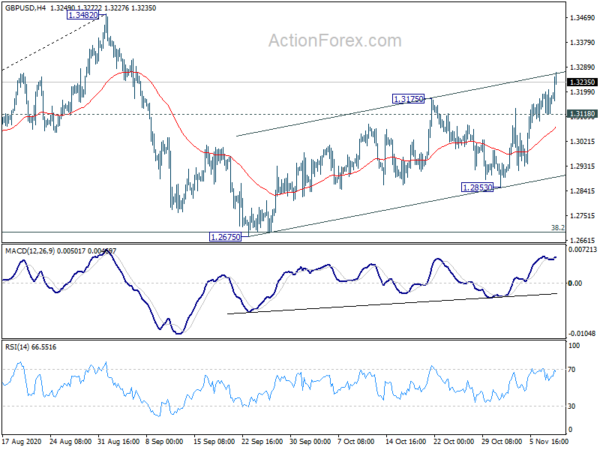 In the bigger picture, focus stays on 1.3514 key resistance. Decisive break there should also come with sustained trading above 55 month EMA (now at 1.3307). That should confirm medium term bottoming at 1.1409. Outlook will be turned bullish for 1.4376 resistance and above. Nevertheless, rejection by 1.3514 will maintain medium term bearishness for another lower below 1.1409 at a later stage. 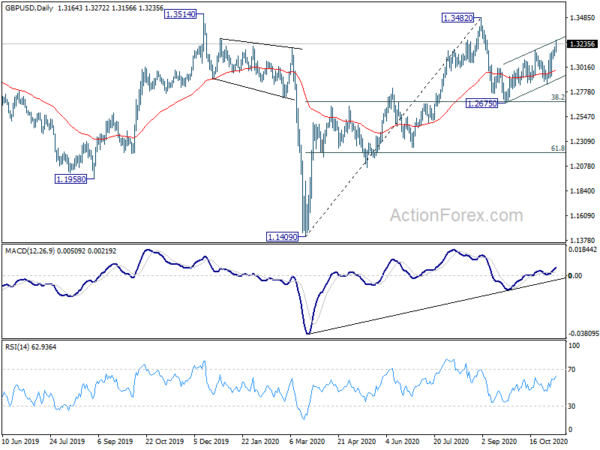