Dollar Surges on Euro Weakness on Talk of Italy

Quick update: ISM manufacturing jumped to 54.7 in December, above expectation of 53.7 and hit the highest level since December 2014. Price paid surged to 65.5. Employment also improved to 53.1. Dollar index breaks recent high and hits 103.82 so far.

Dollar surges broadly today, except versus Aussie, as helped by the selloff in Euro. Dollar index reaches as high as 103.52 and is set to test recent high at 103.65. Nonetheless, Dollar bulls could stay cautious ahead of key economic data to be released this week, including Friday’s non-farm payroll, as well as FOMC Minutes. Euro is weighed down by talk that Italy might eventually leave the Eurozone, and receives little help from better than expected German data. Oil price resumes rally as the agreement of OPEC and non-OPEC countries on production cut kicks start. WTI crude oil surges to 18-month high at 55.24. Gold is weighed down by the strength in dollar and dips below 1150 handle.

UK PMI manufacturing jumped to 56.1 in December, up from 53.6 and beat expectation of 56.1. That’s the highest level in 30 months. Markit noted that "the UK manufacturing sector starts 2017 on a strong footing. The headline PMI hit a two-and-a-half year high in December, with rates of expansion in output and new orders among the fastest seen during the survey’s 25-year history." And, "a plus point from the December survey was that the expansion was led by the investment and intermediate goods sectors, suggesting capital spending and corporate demand took the reins from the consumer in driving industrial growth forward."

Ifo head Clemens Fuest said to a German newspaper Tagesspiegel that "the standard of living in Italy is at the same level as in 2000. If that does not change, the Italians will at some stage say: ‘We don’t want this euro zone any more’." German unemployment dropped -17k in December, much better than expectation of -5k. Unemployment rate was unchanged at 6.0%, staying at the lowest level since the beginning of the data series back in 1992. German CPI rose 0.7% mom, 1.7% yoy in December, above expectation of 0.6% mom, 1.4% yoy. Also from Europe, Swiss SVME PMI dropped to 56.0 in December, down from 56.6, in line with consensus.

The Caixin PMI manufacturing for China rose to 51.9 in December, much better than expectation of being unchanged at 50.9. That’s the best reading in three years since January 2013. Caixin noted that "a further rise in production at Chinese manufacturers supported the higher PMI reading in December. Notably, the rate of output growth accelerated to a 71-month high, with a number of panelists commenting on stronger underlying demand and new client wins." And, "data indicated that improved domestic demand was the key driver of new business growth, however, as new export sales were unchanged in December." Nonetheless, released earlier in the week, the official PMI manufacturing dropped to 51.4, down from 51.7 and below expectation of 51.6.

EUR/USD drops sharply today and focus is back on 1.0351 low. Break will resume the larger down trend and target parity next. In case of another recovery, we’d expect upside to be limited by 1.0669 resistance and bring down trend resumption. However, firm break of 1.0669 will argue that stronger recovery is underway back to 1.0872 resistance instead. 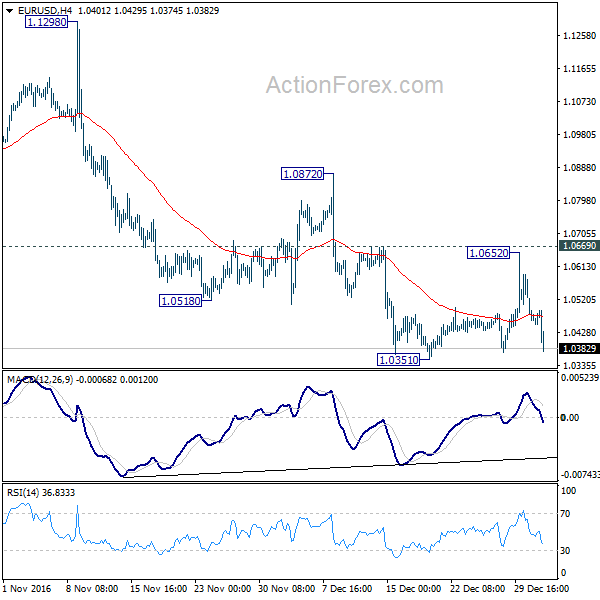 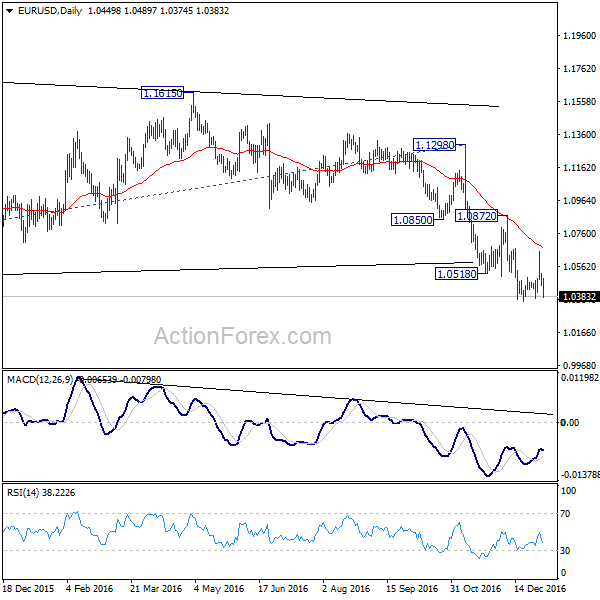