Dollar, Yen and Swiss Franc are trading generally lower as the week starts with solid risk-on mode. In particular, Nikkei is up more than 2% after release on stronger than expected GDP data. A batch of solid Chinese data also provides support to overall sentiments. New Zealand and Australian Dollar are currently the best performing ones, followed by Sterling.

Technically, USD/CHF and EUR/CHF are two pairs that’s worth a look. USD/CHF is pressing 0.9115 minor support and break will indicate completion of the rebound from 0.8982 low. Near term outlook will also be held bearish with 0.9207 resistance intact. In this case, USD/CHF would more likely resume medium term down trend than not. On the other hand, EUR/CHF is staying in range, trading closer to 1.0824 temporary top. Break there will solidify near term bullishness for a test on 1.0877/1.0915 resistance zone. Let’s see which way the Franc goes.

Economy Minister Yasutoshi Nishimura also sounded cautious as he reminded people of the JPY 30T spare capacity. “We can’t make up for all of the output gap just with public works spending. We also need to spur private investment. But the size (of the output gap) is something we’ll look at” in compiling the new spending package, he said.

BoJ board member Takako Masai reiterated in a speech that the baseline scenario is for that the economy is “likely to follow an improving trend with economic activity resuming and the impact of COVID-19 waning gradually”. Still “the pace is expected to be only moderate while vigilance against COVID-19 continues”. Thereafter, as the impact subsides globally, the economy is projected to “keep improving further with overseas economies returning to a steady growth path.”.

However, she had a cautious view on the outlook for two reasons. Firstly, growth in world trade volume had already been slowing since mid-2018, due to US-China trade friction. Japan’s export and production levels “had already been on a downtrend” prior to the pandemic. Secondly, global services sector had a growth presence in Japan’s labor market in recent years, but it’s projected to “recover at only a moderate pace”.

Additionally,l she pointed out the risks to outlook, including (1) the impact of COVID-19 on domestic and overseas economies; (2) firms’ and households’ medium- to long-term growth expectations; and (3) developments in the financial system. Additionally, attention should be paid to US-China tensions, Brexit, geopolitical risks and global financial markets developments.

In China, industrial production grew 6.9% yoy in October, matched expectations. The figure was unchanged from September’s growth. Fixed asset investment grew 1.8% ytd yoy, above expectation of 1.6%. But retail sales rose only 4.3% yoy, below expectation of 5.0% yoy. That’s nevertheless still the strongest rise this year, as led by 12.5% growth in auto sales.

Overall, the set of data suggested that China’s economy maintained broad-based acceleration in October, which could likely continue through the rest of Q4. Policy stimulus continued to had a positive impact on both investment and industrial output. The consumer sectors were also returning to normal. 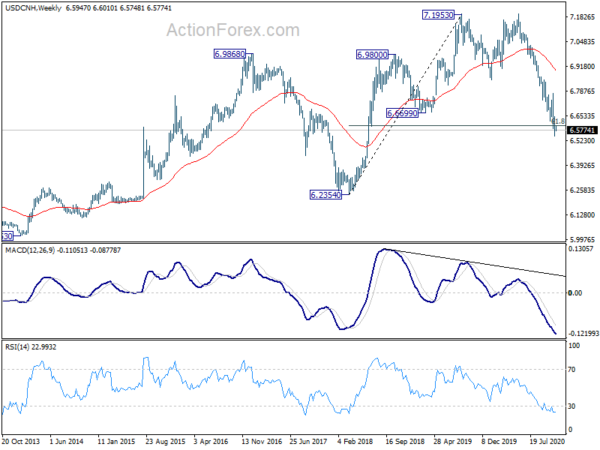 Some retail sales and CPI data to watch

Some economic data featured this week would reveal how the economic perform on the domestic side, as we entered into another phase of the coronavirus pandemic. The data include US retail sales; Canada retail sales and CPI; UK retail sales and CPI, Japan CPI. Also RBA minutes, Australia wage price index and employment will be watched. Here are some highlights for the week:

AUD/USD is staying in consolidation from 0.7339 temporary top and intraday bias remains neutral first. At this point, we’re favoring the bullish case that consolidation pattern from 0.7413 has completed with three waves to 0.6991. On the upside, break of 0.7339 will target at test on 0.7413 high first. Firm break there will resume larger rally from 0.5506. Nevertheless, on the downside, break of 0.7221 minor support would likely extend the consolidation pattern from 0.7413 with another falling leg. 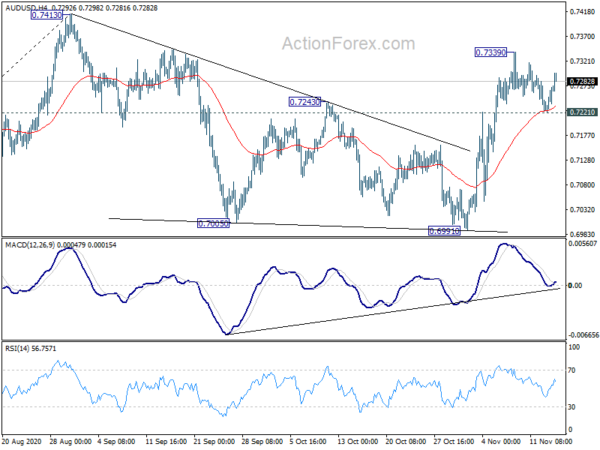 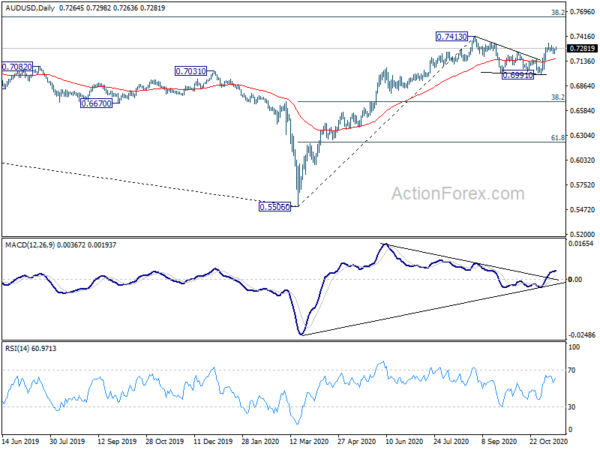