Full Risk-On Market With Upside Breakout in DOW and Oil

Markets are in full risk-on mode for now, with DOW closing above 30k handle for the first time overnight. Asian stocks are also generally higher, with strong rally in Nikkei and HSI. WTI oil prices powered through a key near term resistance level while Gold is set to break through 1800 psychological support with next move. Yen, Swiss Franc and Dollar are the worst performing ones for the week while commodity currencies are the strongest, led by New Zealand Dollar. Nevertheless, Euro has the potential to catch up.

Technically, WTI crude oil’s strong break of 43.50 resistance confirms resumption of the rebound from March’s spike low. 50 psychological level is the next hurdle while 65.38 resistance could be the target for medium term. USD/CAD is set to take on 1.2928 support soon and break there will resume whole fall from 1.4667. CAD/JPY might also take on 81.42 resistance soon too and break will resume the rebound from 73.80. 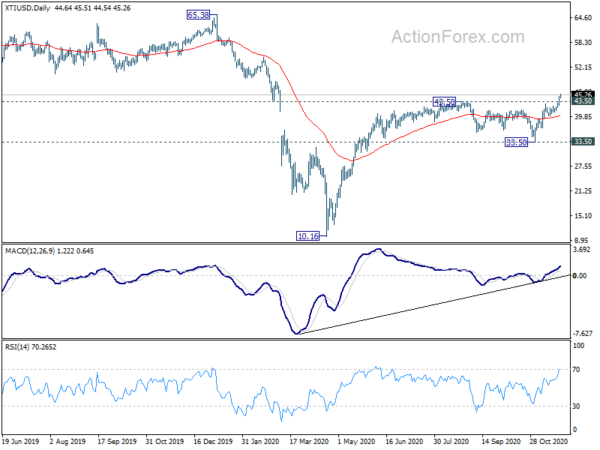 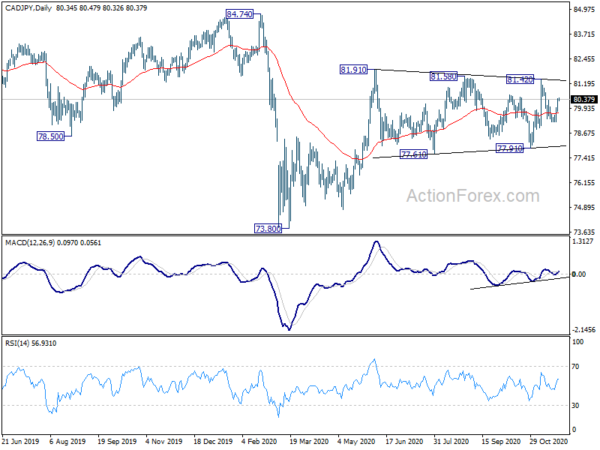 US stocks broke out of range overnight to extend recent record run, with DOW closing at all time high at 30046.24, up 1.54%. Investors cheered the news that former Fed Chair Janet Yellen was picked by Joe Biden as the next Treasury Secretary. Yellen’s position on loose fiscal policy was clear, as she support continuation of extraordinary fiscal support, beyond necessary. Also, as Fed’s interest will stay low for many years to come, the government can afford to have more debt.

New York Fed President John Williams said yesterday that the asset purchases are “serving their purposes really well right now”. The purchases are providing support for smooth market conditions, as well as holding down longer-term yields. The program could be adjusted if needed, but he gave no indication for the need of imminent change. .

On negative interest rates, Williams said they are “a possible option but I think have less benefits relative to costs. Forward guidance and asset purchases would continued to be the “primary tools for policy”.

Separately, St. Louis Fed President James Bullard said “there’s light at the end of the tunnel” with vaccine developments. “In terms of being able to see the end of the crisis, that’s very much a realistic view at this point.”

RBNZ Orr: Financial system not been tested as severely as it could have been

RBNZ Governor Adrian Orr said the New Zealand economy has been “relatively resilient” to the economic shock from the pandemic so far. The financial system “as not been tested as severely as it could have been”. However, he warned, “businesses domestically and internationally face ongoing challenges as fiscal support measures unwind, which will lead to an increase in loan impairments for banks.”

Intraday bias in AUD/USD remains on the upside at this point, for retesting 0.7413 high. Decisive break there will resume whole rally from 0.5506. Next target is 0.7635 long term fibonacci level. On the downside, though, break of 0.7265 support will turn bias back to the downside, to extend the consolidation from 0.7413 with another falling leg. 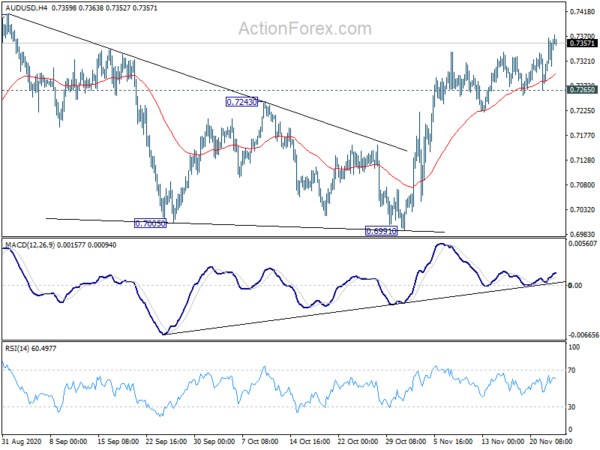 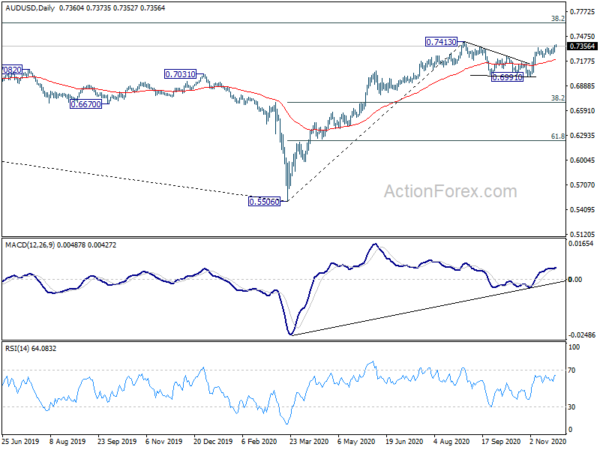