Dollar’s sell-off slowed mildly as stocks turned into consolidation ahead of Thanksgiving holiday in the US. But for now, the greenback remains the second worst performing for the week, just next to Yen, followed by Swiss Franc. Commodity currencies are strongest together with Sterling. Mixed economic data from US provided little inspirations to investors. It’s unlikely for FOMC minutes to have some drastic too.

Technically, EUR/USD’s breach of 1.1920 resistance suggests that rebound from 1.1602 is resuming for 1.2011 high. GBP/USD is heading to equivalent resistance at 1.3482 while AUD/USD is targeting 0.7413 resistance. We’ll see if the greenback could finally break through these near term support levels before weekly close.

Mixed economic data released from US

GDP grew 33.1% annualized in Q3, according to the second estimate, comparing to Q2’s -31.4% annualized contraction. With the second estimate, upward revisions to nonresidential fixed investment, residential investment, and exports were offset by downward revisions to state and local government spending, private inventory investment, and personal consumption expenditures (PCE). Imports, which are a subtraction in the calculation of GDP, were revised up.

European Commission president Ursula von der Leyen said there were “genuine progress” in post-Brexit negotiations with the UK. She emphasized that “the next days are going to be decisive,” on whether a deal could be clinched.

“With very little time ahead of us, we will do all in our power to reach an agreement. We are ready to be creative. But we are not ready to put into question the integrity of our single market,” she added.

“We need to establish robust mechanisms, ensuring that competition is – and remains – free and fair over time. In the discussions about state aid, we still have serious issues, for instance when it comes to enforcement,” said von der Leyen.

She also reiterated, “the European Union is well prepared for a no-deal-scenario, but of course we prefer to have an agreement.”

ECB Mersch: Recalibration could be rectification or more targeted and focused

ECB Executive Board member Yves Mersch said in an interview that the second coronavirus lockdown in European has been “much less growth-damaging and much more targeted “. Still there is an “increase in fragmentation”, with divergence between services and manufacturing sectors. Some countries are more exposed to the pandemic consequences.

Overall, it’s “difficult to maintain positive growth going into the fourth quarter”. Germany might achieve it but others not. But it’s “premature to conclude that will last into next year with consecutive quarters of negative growth.

On ECB’s policies, Mersch said recalibration could be rectification, “simply an extension “on the time axis” or “of the volume or the intensity”. A second approach is “more targeted, or more focused, or on the contrary consider now untested instruments, a theoretical possibility in an all encompassing discussion.”

RBNZ Orr: Financial system not been tested as severely as it could have been

RBNZ Governor Adrian Orr said the New Zealand economy has been “relatively resilient” to the economic shock from the pandemic so far. The financial system “as not been tested as severely as it could have been”. However, he warned, “businesses domestically and internationally face ongoing challenges as fiscal support measures unwind, which will lead to an increase in loan impairments for banks.”

EUR/USD’s breach of 1.1920 suggests that rebound from 1.1602 is resuming. Intraday bias is back on the upside for retesting 1.2011 high. Decisive break there will resume whole rally from 1.0635 low. On the downside, though, break of 1.1800 support will turn bias to the downside, to extend the consolidation pattern from 1.2011 with another falling leg. 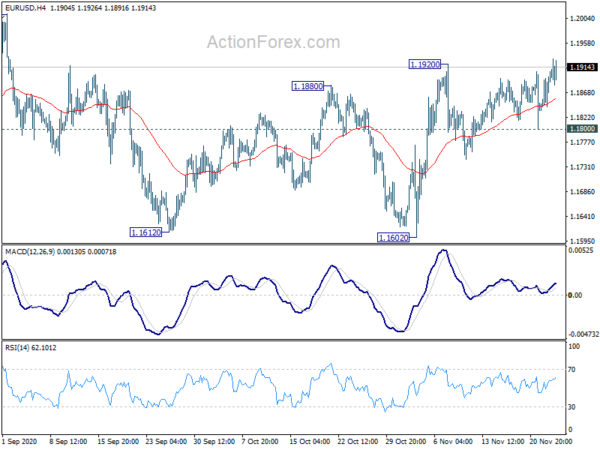 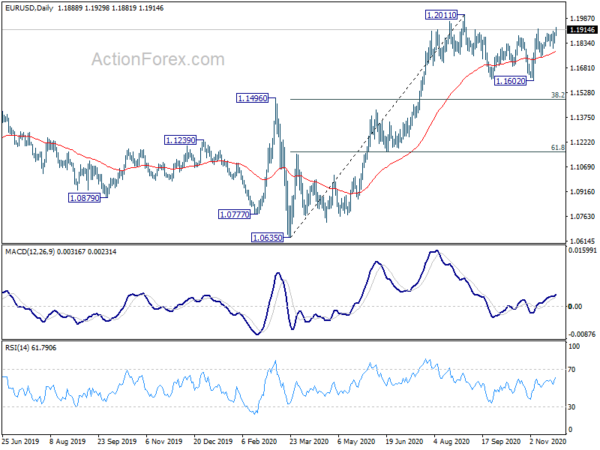