Dollar Continues to Rebound, Coronavirus Worries Might be Coming Back

Dollar trades generally higher today as rebound continues. Yen and Swiss Franc are following as the next strongest so far. Commodity currencies are generally lower as led by Australian Dollar. The picture might imply risk aversion but there is no clear selloff in Asian markets. At the time of writing, Asian stocks are just mixed, with Japan on holiday.

It remains to be seen if some traders are jumping out of risk markets early, on pandemic concerns. Japan reported on Sunday a new coronavirus variant from Brazilian travelers. The UK variant was found in Northern Mexico already. China recorded the biggest daily infections in over five months. But there’s no information yet on whether the coronavirus cases found in China was the same as the one in Wuhan a year ago, which started the pandemic. Or, some new variants are re-entering into China.

“Ahead of New Year’s Day and the Spring Festival, consumer demand increased, and feed costs also rose,” said Dong Lijuan, a senior statistician at the NBS. “At the same time, affected by unusual weather and rising costs, the CPI turned from a decline into an increase.”

PPI dropped to -0.4% yoy in December, up from November’s -1.5% yoy, higher than expectation of -0.8% yoy. That’s also the slowest factory gate deflation since last February.

Other states and territories to record an increase in turnover were Queensland (4.5%), New South Wales (2.3%), Western Australia (1.2%), Tasmania (3.4%), the Australian Capital Territory (2.5%), and the Northern Territory (2.2 per cent). The brief lockdown in South Australia (-0.2%) led to a relatively flat result, as falls in most industries were offset by a rise in food sales.

Gold dips to 1817, decline slowing a bit but no bottoming yet 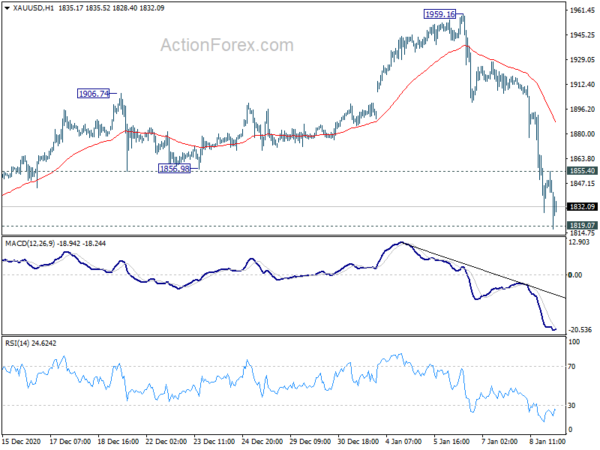 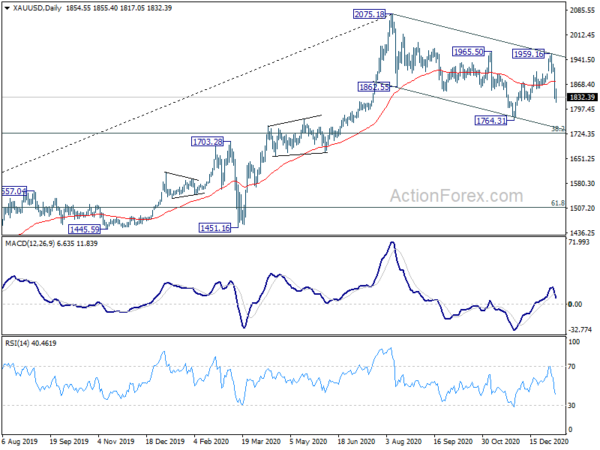 Economic data to start to take back the spotlights

AUD/USD dips further today but stays above 0.7641 support. Intraday bias remains neutral first and another rise remains mildly in favor. On the upside, break of 0.7819 will resume larger up trend form 0.5506 to 0.7413 from 0.6991 at 0.8170. However, break of 0.7641 will indicate short term topping, on bearish divergence condition in 4 hour MACD. Intraday bias will be turned back to the downside for deeper correction to 0.7461 support first. 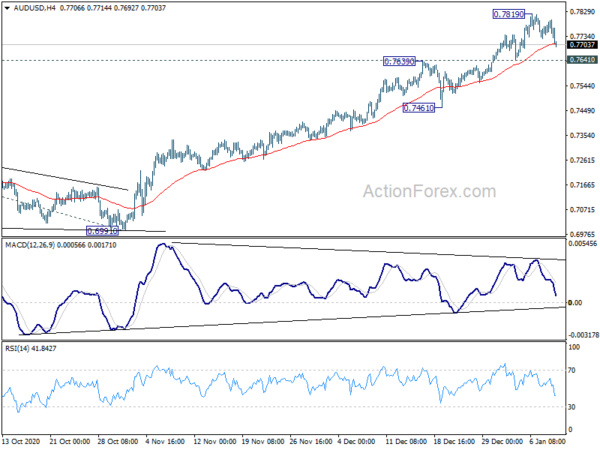 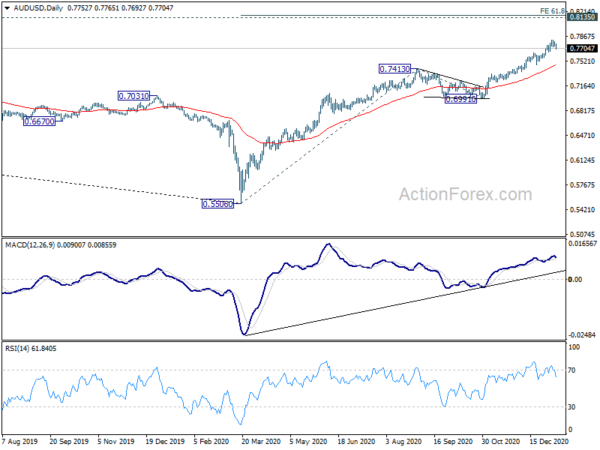