Euro Weak With Dollar in as Stock Surge Further, Looks into German ZEW

Overall developments in the markets are unchanged as strong risk-on sentiments continue. Yen is currently the worst performer by a mile. Dollar, Euro and Swiss Franc are following behind. Sterling continue to stay strong together with commodity currencies. A focus today is on whether Germany ZEW economic sentiment and Eurozone GDP could give Euro a lift. Otherwise, the current trend should continue for the very near term.

Technically, 105.76 resistance in USD/JPY is a level to pay attention and break will resume the rebound from 102.58. That could help cushion Dollar’s decline elsewhere. However, rejection by this resistance could prompt some more downside in the greenback. In particular, USD/CHF’s breach of 0.8889 minor support is a sign of Dollar weakness but there is no clear follow through selling yet. EUR?USD’s break of 1.2148 minor resistance would resume the rebound from 1.1951 towards 1.2348 high.

RBA Minutes: Some years before inflation and unemployment goals achieved

Minutes of RBA’s February 2 meeting noted that a number of major central banks had already announced extensions of their QE program. There was also a widespread expectation for RBA to extend its own. Hence, “if the Bank were to cease bond purchases in April, it was likely that there would be unwelcome significant upward pressure on the exchange rate.”

Outlook for the economy also indicated that it would be “some years before the goal of inflation and unemployment were achieved”. Hence, RBA decided to purchase an additional AUD 100B of Australian Government and states and territories after the current program completes in April.

On interest rate, the minutes reiterated that a negative policy rate is “extraordinarily unlikely”. Cash rate would be maintained at 10 basis points for “as long as necessary”. The conditions for a rate hike are not expected to be met “until 2024 at the earliest”.

BoJ Governor Haruhiko Kuroda told the parliament that “optimism over the global economic outlook and steady vaccine rollouts may be behind the recent surge in stock prices”. Nevertheless, he also warned that “global outlook remains highly uncertain and risks to Japan’s economy remained tilted to the downside. His comment came when Nikkei closed above 30k level for the first time in three decades.

Kuroda also noted that it’s premature to consider exiting the massive monetary stimulus measures, including ETF purchase. “It’s likely to take significant time to achieve our price target. As such, now is not the time to think about an exit including from our ETF buying,” he said.

Finance Minister Taro Aso also said, it’s not time to withdraw fiscal support. “The biggest issue now is when to shift from crisis-mode policy to fiscal restoration. In doing so, it’s important for such action to be coordinated,” he added.

Germany ZEW economic sentiment and Eurozone GDP are the major focuses in European session. Later in the day, Canada foreign portfolio investment and US Empire State manufacturing will be featured.

EUR/USD is staying in consolidations from 1.2148 temporary top and intraday bias remains neutral first. On the upside, break of 1.2148 will reaffirm the case that correction from 1.2348 has completed with three waves down to 1.1951. Intraday bias will be back on the upside for 1.2188 and then 1.2348 high. However, break of 1.2053 minor support will dampen this bullish case and bring retest of 1.1951 support instead. 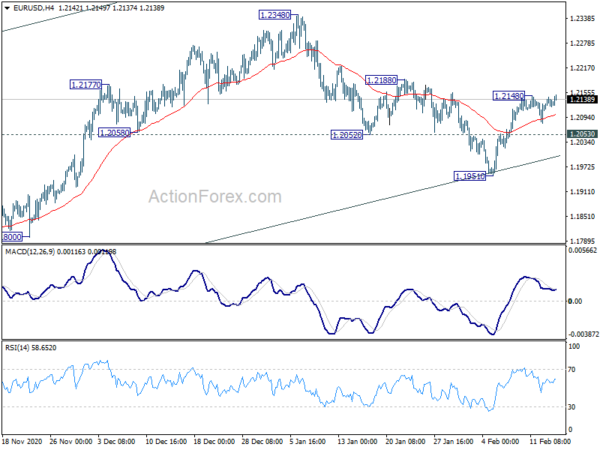 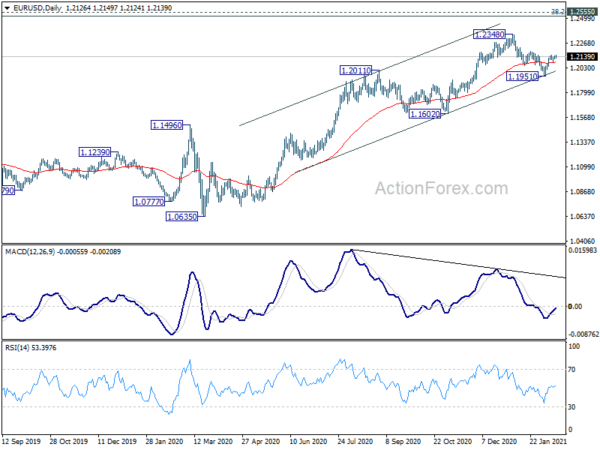