Dollar is trading as the strongest major currency for the week as markets await employment data from US. The general consensus is that barring a disastrous non-farm payroll report, Fed will still hike interest rate in the FOMC meeting next week. It would be a big blow to the credibility of Fed if they don’t deliver after the chorus of hawkish messages. Nonetheless, the NFP numbers, including the headline job growth and wage growth, are still important for Fed to determine the policy path for the year. FOMC members generally maintained the expectation of three rate hikes this year. But now that the first hike will likely be done next week, there is indeed possibility for four hikes should the economy perform well with boost from US president Donald Trump’s expansive policies.

Other data point to strong NFP

Economists are expecting NFP to show 190k growth in US job market in February, down from prior month’s 227k. Unemployment rate is expected to drop from 4.8% to 3.7%. Average hourly earnings growth is expected to pick up again and rise to 0.3% mom. Other employment related data were generally positive. ADP report showed 298k growth in private sector jobs, much higher than expectation of 184K. Employment component of ISM manufacturing dropped from 56.1 to 54.2 but stayed well in expansion territory. On the other hand, employment component of ISM non-manufacturing rose from 54.7 to 55.2. The four week moving average of initial jobless claims dropped fro 245k to 237k during the period. Conference board consumer confidence rose from 111.6 to 114.8 hitting the highest level in 15 years. We’ll more likely get an upside surprise in NFP today.

10 year yield heading for a breakout

TNX jumped for another day overnight by closing at 2.598, up 0.046. 2.621 key resistance level is now in sight. Today’s job data could be a stimulus for this breakout for resuming up trend from 1.336. If not, traders would probably wait for Fed’s new projection before acting. Nonetheless, further rise is now in favor as long as 2.545 minor support holds. Sustained trading above 2.621 will pave the way for next key resistance level at 3.036.

Euro surged yesterday on upbeat tone of ECB president Mario Draghi during the post meeting press conference. The common currency is trading as the second strongest major currency for the week. Strength is particularly notable against Yen. Despite no change in the policy rate and the QE program, the euro gained as President Mario Draghi added some upbeat flavors at the press conference and as the staff upgraded the inflation forecasts. The members continued to see risks to growth skewed to the downside, but agreed that they are "less pronounced" now. While the forward guidance in the statement maintained that "interest rates will stay low, or lower for an extended period of time", the members had discussions of its removal at the meeting. More in Cautiously Optimistic Draghi Sees No Urgency to Add Stimulus, Risks Less Pronounced 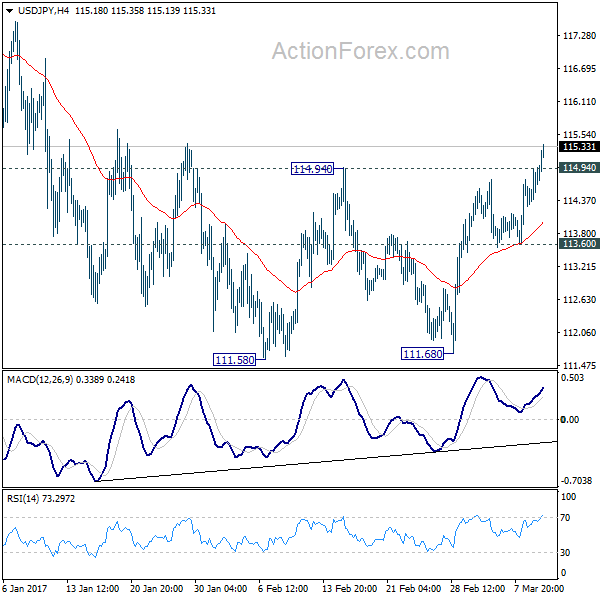 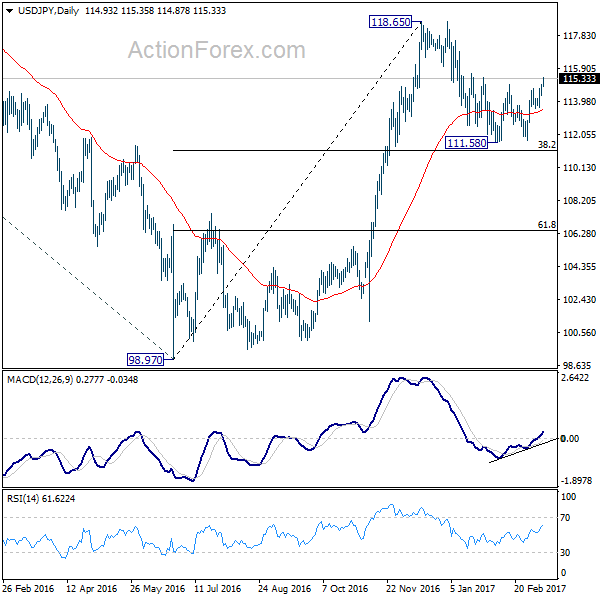