Yen Under Pressure as Swiss Franc Decline Slows a Bit

Selling focus appears to be turning to Yen as markets enter into US session. Swiss Franc remains weak but the decline is slowing slightly. Dollar and Euro are also soft, but both are supported by buying against Yen and Franc. On the other hand, commodity currencies remain the strongest ones for today as led by New Zealand Dollar. Canadian Dollar follows as second, with help from mild strength in oil price.

Technically, 106.21 resistance in USD/JPY would now be an immediate focus with today’s strong rally. Break will resume whole rise from 102.58, for 108.22 fibonacci level. CHF/JPY appears to be drawing support from 116.20. Break of 117.07 will confirm defending the support level and bring stronger rebound. That would also confirm that the tide has turned against the Yen, which might help USD/JPY break through 106.21. 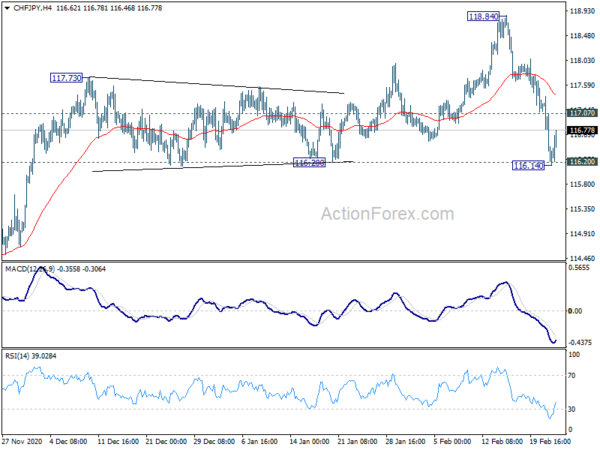 Destatis said, “in the fourth quarter, however, the recovery process slowed due to the second coronavirus wave and another lockdown imposed at the end of the year.”

BoJ Governor Haruhiko Kuroda told the parliament today that “the BOJ’s various tools, including its ETF buying, will be the target of the March review. We’ll examine how our tools are affecting markets and look at what we can do better.” He added that government bond buying has already slowed substantially as markets are calm. Average duration of the bond holdings also remained stable a around seven years.

Separately, former BoJ deputy governor Hirohide Yamaguchi told Reuters that BoJ’s review is “unlikely” to come up with “an outcome that has a substantial impact on the economy and markets. “The review will probably be just a show of gesture that it’s doing ‘something’ to address the cost,” said Yamaguchi.

“It’s impossible for the BOJ to guide public perceptions at its will,” Yamaguchi added. “It’s time now for the BOJ to conduct a ‘genuine’ policy review and use the findings to modify its policy framework.”

RBNZ left monetary policy unchanged today as widely expected. OCR is held at 0.25%, Large Scale Asset Purchase Programme at up to NZD 100B and Funding for lending program unchanged. Current monetary policy setting were seen as “appropriate” to achieve the central bank’s inflation and employment remit. But a “prolonged period of time” is needed before meeting the conditions of removing monetary stimulus.

In the Monetary Policy Statement, RBNZ said the economic rebound has been “stronger than expected”. But domestic recovery “has been uneven” while outlook is “highly uncertain”. “Significant stimulus is still required” and “interest rates are assumed to remain at historically low levels for an extended period.” 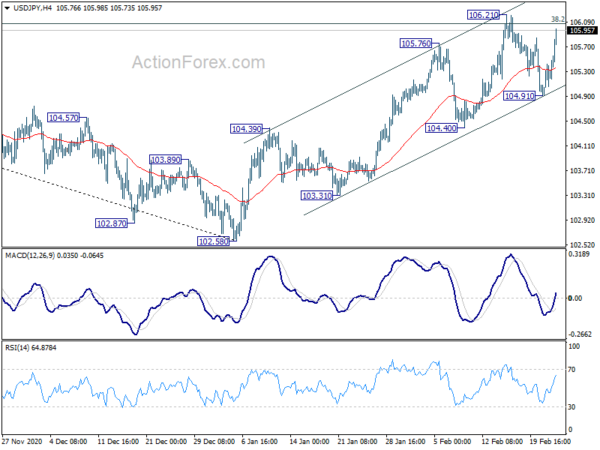 In the bigger picture, USD/JPY is still staying in long term falling channel that started back in 118.65 (Dec. 2016), and there is no clear indication of trend reversal yet. Though, sustained trading above 55 week EMA (now at 105.84) will be the first sign of reversal and turn focus to channel resistance (now at 110.15). 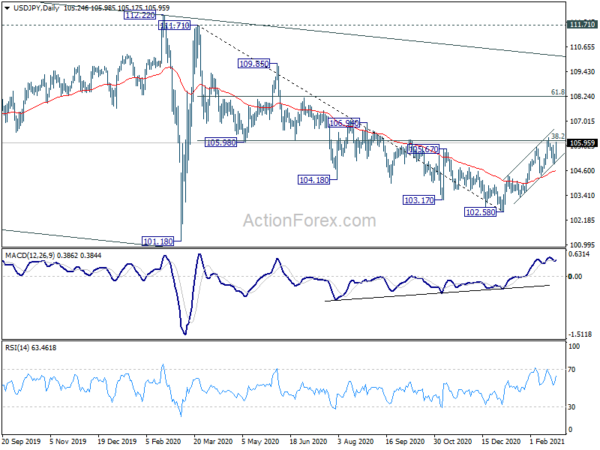