The markets are relatively mixed so far. Dollar’s rally attempt was brought to a halt overnight while Euro and Swiss Franc recovered. Commodity currencies also recovered, as led by Aussie, with support from better than expected GDP data. Yet, major pairs and crosses are kept in tight range. In other markets, Asian stocks rises broadly in range, following selloff in the US overnight. Gold recovered but lacks follow through buying. WTI crude oil weakened but holds on to near term support level. Overall, the movements are rather consolidative. 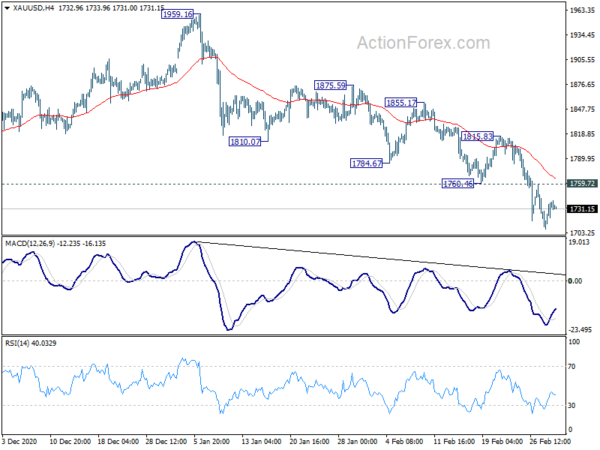 Head of National Accounts at the ABS, Michael Smedes said: “Despite the two consecutive quarters of strong growth, economic activity remained 1.1 per cent lower than recorded in the 2019 December quarter.” This is the first time in the over sixty year history of the National Accounts that GDP has grown by more than 3.0 per cent in two consecutive quarters.

China Caixin PMI Services dropped to 51.5 in February, down from 52.0, slightly below expectation of 51.6. Markit noted that services activity growth eased to ten-month low. There was softer increase in total new work amid renewed drop in export sales. Nevertheless, confidence regarding the 12-month business outlook remained robust. PMI Composite dropped to 51.7, down from 52.2.

Wang Zhe, Senior Economist at Caixin Insight Group said: “To sum up, the momentum of manufacturing and services recovery further weakened. Overseas demand was sluggish and the job market was under higher pressure. Inflationary pressure continued to grow. Despite these headwinds, manufacturers and service providers were still optimistic. The confidence mainly came from the experience in fighting the pandemic over the past year, as well as the expectation that winter Covid-19 flare-ups were coming to an end. Also, companies were confident in the future outlook for their new products.

Goushi Kataoka, the most dovish BoJ board member, said “it’s hard now to foresee inflation powerfully heading towards our 2% target.”

“in order to prevent Japan’s economy from falling into deflation, further policy coordination of both fiscal and monetary policy is needed,” he added. “It was necessary for the BOJ to strengthen its policy commitment by relating the forward guidance for policy rates to price targets.”

Fed Governor Lael Brainard said in a speech, “increasing vaccinations, along with enacted and expected fiscal measures and accommodative monetary policy, point to a strong modal outlook for 2021, although considerable uncertainty remains”.

“Inflation is likely to temporarily rise above 2 percent,” she added. “Transitory inflationary pressures are possible if there is a surge of demand that outstrips supply in certain sectors when the economy opens up fully”. But, “a burst of transitory inflation seems more probable than a durable shift above target in the inflation trend and an unmooring of inflation expectations to the upside”

“Today the economy remains far from our goals in terms of both employment and inflation, and it will take some time to achieve substantial further progress,” she said. “We will need to be patient to achieve the outcomes set out in our guidance”.

San Francisco Fed President Mary Daly said in a speech that “a swell of market and academic commentary has started to emerge about a quick snapback, an undesirable pickup in inflation, and the need for the Federal Reserve to withdraw accommodation more quickly than expected”.

But that was only “reaction to a memory of high and rising inflation, an inexorable link between unemployment, wages and prices, and a Federal Reserve that once fell behind the policy curve”. She added, “the world today is different”.

She viewed “recent rise in inflation compensation to roughly 2 percent as encouraging and in line with our stated goals. It suggests that our commitment to flexible average inflation targeting has already gained substantial credibility.”

“Today, the costs are tilted the other way. Running inflation too low for too long can pull down inflation expectations, reduce policy space, and leave millions of Americans on the sidelines along the way.”

ECB Panetta: Steepening in nominal GDP-weighted yield curve is unwelcome, must be resisted

ECB Executive Board member Fabio Panetta said in a speech that “the end of the pandemic emergency is in sight and an incipient recovery is on the horizon”. As such, “it might be tempting to conclude that there is less need for monetary policy support.” But he warned that “this temptation must be resisted”. And 2021 is “still a pandemic year”, as the economic consequences will not end soon.

Monetary policy is now in the “third phase” that ECB needs to “preserve accommodative financing conditions to support the recovery and the convergence of inflation to our aim”.

“The steepening in the nominal GDP-weighted yield curve we have been seeing is unwelcome and must be resisted,” he warned.

Intraday bias in AUD/USD remains neutral at this point. The correction from 0.8006 could still extend with another fall through 0.7691 temporary low. But overall, outlook will remain bullish as long as 0.7563 support holds. On the upside, above 0.7844 minor resistance will turn bias to the upside for retesting 0.8006. Break till extend larger up trend from 0.5506. However, decisive break of 0.7563 will bring deeper correction. 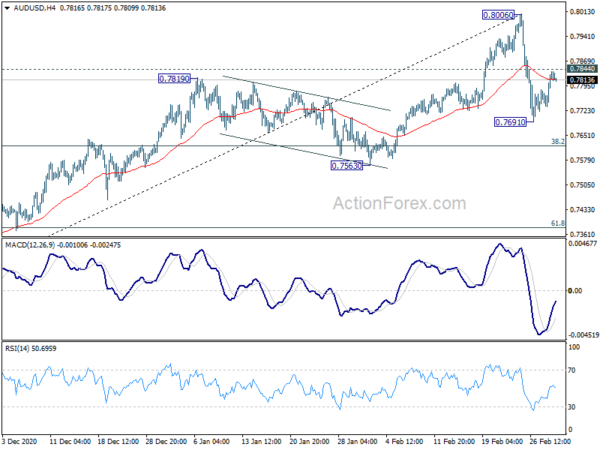 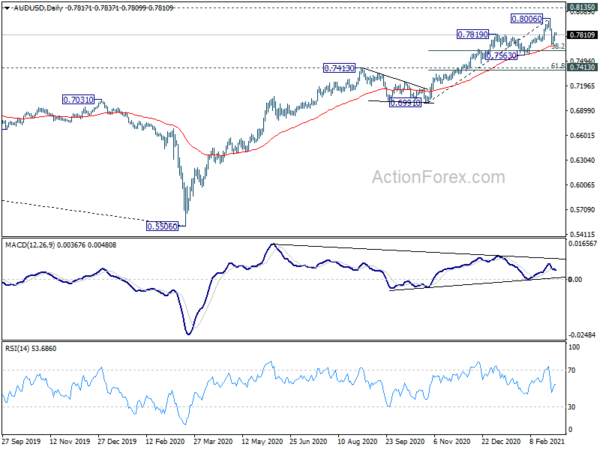