Dollar retreats mildly in Asian session today as overall market sentiments improved some what. Major Asian indices, except China, recovered notably, following DOW’s rally. But weakness in US tech is keeping upside capped. Selloff in Yen and Swiss Franc, and to a lesser extend Kiwi, is still the main theme, on resilience in global treasury yields. Sterling is attempting to take over Dollar’s top spot, while Aussie could catch up any time.

Technically, GBP/JPY’s rally picks up momentum again and it’s on track to 151.80 projection level. But this cold be a tough one to take out as it coincides with medium term channel resistance. The cross will likely need simultaneous strength in the Pound as well as weakness in Yen to push through this resistance. With that in mind, we’ll pay special attention to 0.8537 support in EUR/GBP to gauge the upside potential in GBP/JPY beyond 151.80. 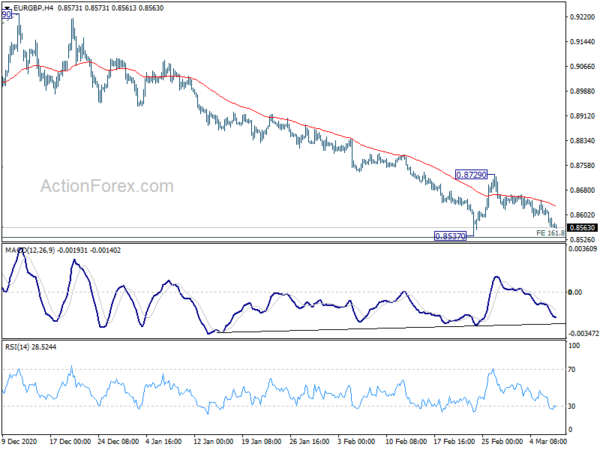 Japan household spending dropped -6.1% yoy in January, much worse than expectation of -2.1% yoy. That’s also the second straight month of decrease, as spending was dragged down by a second state of emergency. “With people refraining from going out under the state of emergency, outlays for items such as suits and dresses fell,” a Ministry of Internal Affairs and Communications official told reporters. Also released, nominal total cash earnings dropped -0.8% yoy in January, down for a 10th straight month.

The economy is expected to shrink in Q1 as it returned to pandemic restrictions. Prime Minister Yoshihide Suga last week extended the emergency through March 21 for the Tokyo region.

“Businesses are the most optimistic they’ve been since 2010. This says the economy recovery has very strong momentum and even though government support is tapering, businesses are increasingly confident the economy will continue to improve,” said Alan Oster, NAB Group Chief Economist.

“Business conditions have rebounded to the very strong levels we saw in December and, importantly, employment conditions remain strong. Businesses are again expanding their workforce, which is key for supporting the labour market recovery.”

ANZ said: “The economy is entering a phase in which gains will be harder won. The tourism sector pain is becoming more palpable, and booming sectors such as construction are running up against constraints in terms of the availability of labour and, increasingly, imported materials.”

However, sustained break of 12074.06 will argue that NASDAQ is already correcting the whole up trend from 6631.42. In this case, deeper, medium-term, correction, could be seen through 10822.57 support. 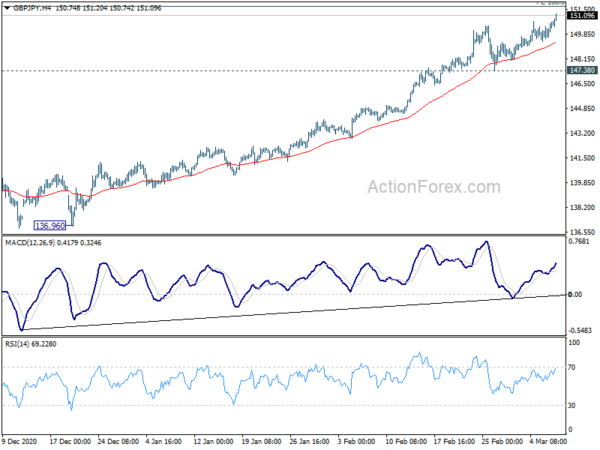 In the bigger picture, rise from 123.94 is seen as the third leg of the sideway pattern from 122.75 (2016 low). With 147.95 resistance taken out, further rally would now be seen to 156.59 resistance (2018 high), Sustained break there should confirm long term bullish trend reversal. On the downside, break of 142.71 resistance turned support is needed to be the first sign of completion of the rise from 123.94. Otherwise, outlook will remain bullish even in case of deep pull back. 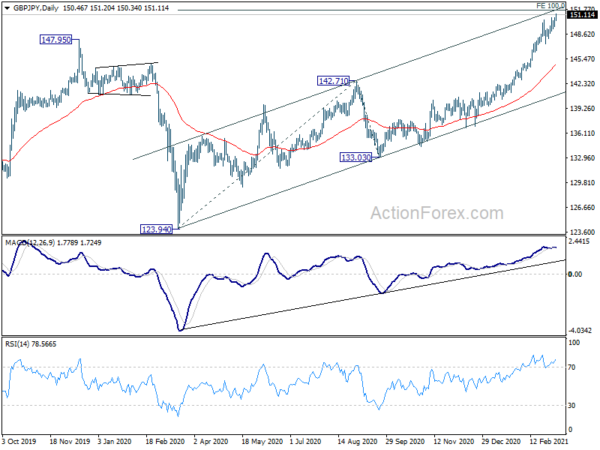