The forex markets are relatively quiet in Asia, with Japan and China on holiday. Main theme is extended selloff in the Japanese Yen despite steep decline in Hong Kong and Singapore stocks. Aussie and Kiwi are the mildly firmer ones while Swiss Franc is softer. Also, a major talking point is the strong rises in cryptocurrencies, as led by ethereum which hits record high.

Technically, despite the late rebound in Dollar last week, there is no clear sign of bullish reversal yet, except versus Yen. In particular, we’ll keep an eye on 0.9180 minor resistance in USD/CHF and 0.7676 minor support in AUD/USD. As long as these levels holds, we’d expect selloff in the greenback to come back sooner or later. 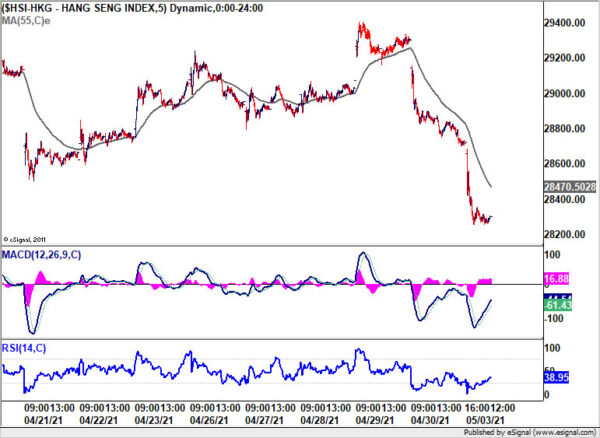 Bitcoin back at 58k as Ethereum hits record

Bitcoin also follows higher and breaches 58000 handle today. As the first leg of the corrective pattern from 64828 has completed at 47112 already, Further rise is now in favor back to retest this high. However, we’d not expecting a firm break there. We’re still viewing price actions from 64828 as a medium term correction, and expect at least another falling leg before it completes. 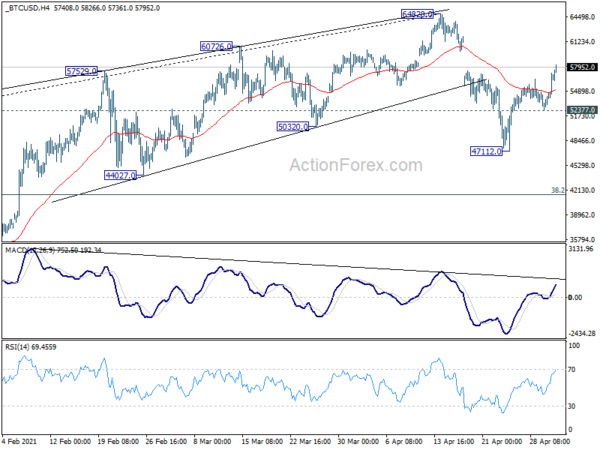 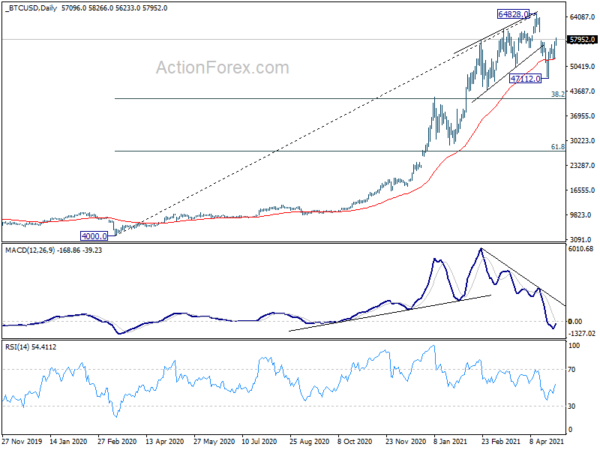 Australia AiG Performance of Manufacturing Index rose 1.8 pts to 61.7 in April. that’s the seventh straight month of rise, and the strongest reading since March 2018. All six manufacturing sectors expanded, as did all seven activity indicators.

Ai Group Chief Executive Innes Willox said: “Australia’s manufacturing industry showed no signs of slowing in the month following the end of the JobKeeper wage subsidy…. There was a large lift in manufacturing production, sales and exports and employment continued to grow solidly – although not at the very rapid pace seen in March. To date the sector as a whole has not been adversely affected by the stronger Australian dollar although a number of businesses are keeping a close eye on where the currency goes from here.”

RBA and BoE to meet, ISMs and NFP to be released

Two central banks will meet this week. RBA should monetary policy generally unchanged. Cash rate and 3-year government yield target will be held at 0.10%. The central bank has also just started the second round of AUD 100B in asset purchases. Though, yield curve control would probably be extended to from April 2024 bonds to November 2024 bonds. Attention will mostly be on the new economic projections, where RBA could lower unemployment rate forecast.

BoE is also generally expected to keep monetary policy unchanged, with Bank rate at 0.10% and asset purchase target at GBP 895B. Eyes will be on the monetary policy report and new forecasts. GDP growth outlook could be upgraded, together with near term inflation view. Also, more importantly, Sterling bulls would be eager to hear the word “tapering” as vaccinations are making good progresses in the UK.

BoJ will release minutes while ECB will also publish monthly economic bulletin. But the busy economic data releases will be more importantly, including US ISMs and NFP, Canada and New Zealand employment,. Here are some highlights for the week: 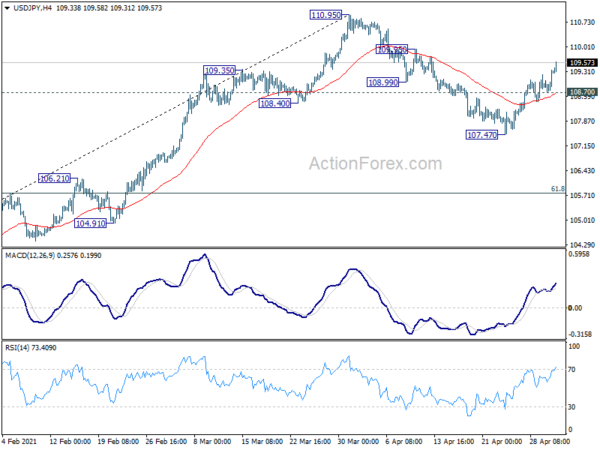 In the bigger picture, rise from 102.58 might have completed at 110.95. But strong support from 55 day EMA retains near term bullishness for the pair. Break of 110.95 resistance will carry larger bullish implications and target 112.22 resistance next. Though, break of 107.47 support will shift favor to the case of long term sideway trading between 101.18/111.71. 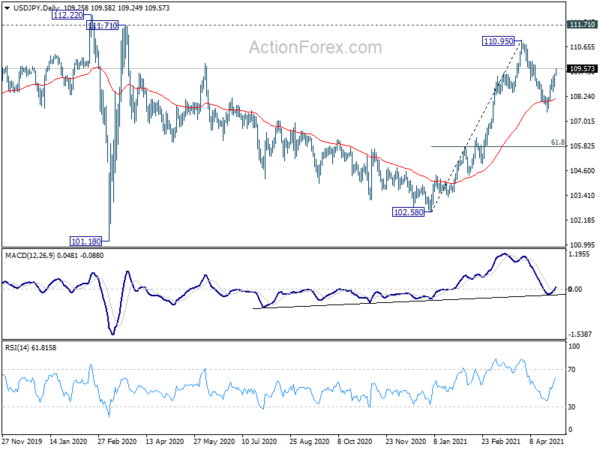