Dollar weakens against Euro, Aussie and Canadian in early US session despite solid non-farm payroll report. The selloff is, at this point, seen as a sell-on-news move. Canadian dollar is supported by its own job data. The set of NFP should have done nothing to alter Fed’s decision to hike interest rate next week. Nonetheless, without a surge in wage growth, the report doesn’t add to the case for more than three hikes this year. Focus will turn to next week’s FOMC meeting, with new economic projections.

The BoE’s quarterly Inflation Attitudes survey released today showed inflation expectation surged to highest level in three years. The consumer medium expectation for price growth over the next 12 months was at 2.9%, highest since 2013. That was up from prior 2.8% at prior survey back in November. Five year inflation expectations jumped to 3.2%, up from prior 3.1%. Meanwhile, 42% of respondents expected interest rates to rise over the next 12 months. 28% said interest rate would stay unchanged. Only 6% expected inflation rate to fall.

In Japan, short term JGB yields rose today as BoJ reduced the size of purchase of corresponding maturities. The one- to three- year JGB purchase was lowered to JPY 300b, JPY 20b lower than prior purchase last week, and was the smaller amount since September 2014. Purchase of discount bills was lowered to JPY 250b, smallest since 2015. Two year JGB yield rose 1.5 basis points to -0.255%. Three-month bill yields rose 1.5 basis points to -0.399%. Japan’s BSI large manufacturing index dropped to 1.1 in Q1.

EUR/USD extends the post-ECB rally today and breaches 1.0630 resistance again. The development suggests that pull back from 1.0828 has completed at 1.0493 already. More importantly, corrective rise from 1.0339 is possibly still in progress for another rising leg. Intraday bias is mildly on the upside for 1.0678 resistance first. Break will send EUR/USD through 1.0828 resistance. 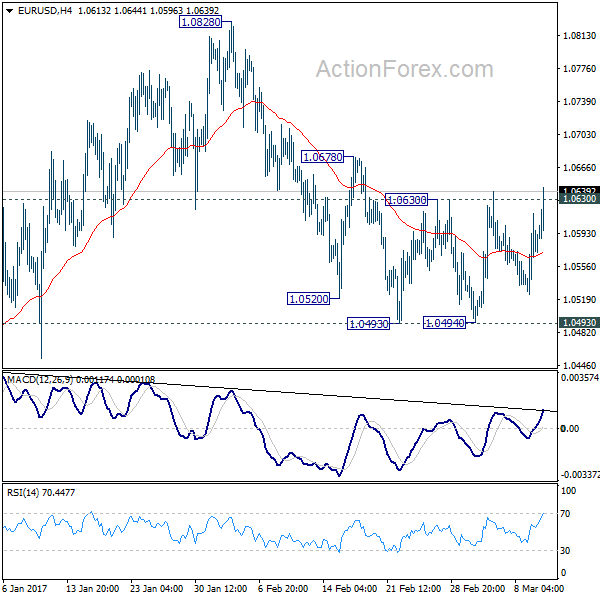 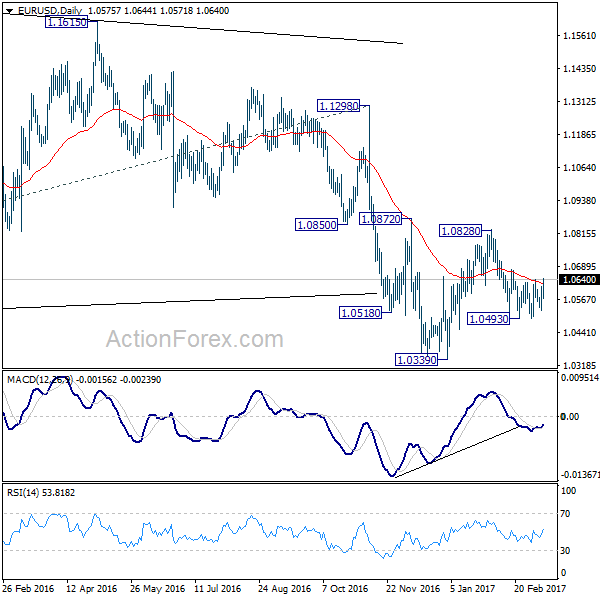