The forex markets are generally staying in consolidative mode today. Dollar and Yen pulled back slightly overnight, together with the notable rebound in stocks. But both are regaining some grounds while commodity currencies soften. Traders would likely be holding their bets on the next move first, waiting for some more guidance from Fed Chair Jerome Powell’s testimony.

Technically, Sterling appears to firming up again in crosses. EUR/GBP is back around 0.8540 temporary low and break will resume the choppy decline from 0.8718 to retest 0.8470 low. GBP/JPY has also rebounded strongly after dipping to 151.28. Break of 154.10 resistance will suggest complete of near term pull back and bring retest of 156.05 high. GBP/CHF is also pressing 1.2796 resistance again. Firm break there will likely resume the whole rebound from 1.2579 through 1.2817 resistance. 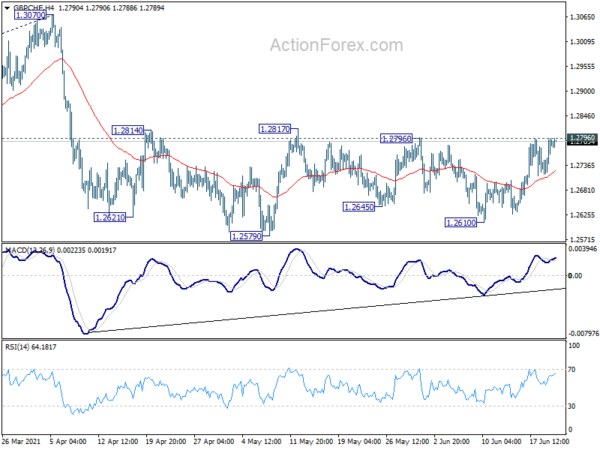 Fed Powell: Inflation to drop back to target as transitory supply effects abate

In the prepared remarks for Tuesday’s testimony, Fed chair Jerome Powell said the economy has shown “sustained improvement” with real GDP on track to posts its “fastest rate of increase in decades”. Labor market have “continued to improve”, but the pace has been “uneven”. Unemployment rate remained “elevated” at 5.8%. But job gains should “pick up in coming months” as vaccination rise. Powell also reiterated that as the “transitory supply effects abate, inflation is expected to drop back toward our longer-run goal”.

Separately, New York Fed President John Williams said the economy is “improving at a rapid rate”, and the “medium term outlook is very good”. However, “data and conditions have not progressed enough for the FOMC to shift its monetary policy stance of strong support for the economic recovery.”

Fed Bullard: Post pandemic playbook may not be the same as financial crisis

St. Louis Fed President James Bullard said the US is “in a much stronger position with respect to reopening we would have anticipated and inflation has come along with it.” He warned that “we have to be ready for the idea that there is upside risk to inflation and for it to go higher.”

“I don’t think we are in the quiescent, low volatility period we were in the aftermath of the global financial crisis. Instead we are in a high volatility many things happening at once situation and because of that we have to be able to react,” he added.

Dallas Fed President Robert Kaplan said “when we got to March it was clearer that we were going to get the pandemic under control”. And, “by the time we get to June…you’ve really got a big upgrade” on economic outlook. A majority of Fed officials expected rate hikes in 2023. That’s “monetary policymakers simply reacting to the dramatically improved economic outlook.”

ECB Lagarde: Overall effects from US inflation spill-overs are moderate

ECB President Christine Lagarde said in a European Parliament committee hearing, “the outlook for the economy is indeed brightening as the pandemic situation improves, the vaccination campaigns progress, and confidence begins to rise.”

“We expect economic activity to improve strongly in the second half of 2021, supported by a robust rebound in consumer spending and solid business investment,” she added. “The risks surrounding the growth outlook have become broadly balanced.” “Euro area annual inflation has picked up over recent months, largely owing to temporary factors, including strong increases in energy price inflation.”

Lagarde also said, “international spill-overs from US inflation can be amplified if people in the euro area shape their inflation expectations also on the basis of developments in the United States.” Though, “overall, however, the effects on euro area HICP inflation are expected to be moderate.”

Intraday bias in GBP/JPY is turned neutral with the strong rebound from 151.28. Correction from 156.05 could still extend lower. Below 151.28 will target 38.2% retracement of 136.96 to 156.05 at 148.75. We’d expect strong support from there to bring rebound. On the upside, sustained break of 154.10 support turned resistance should argue that the correction has completed. Intraday bias will be turned back to the upside for retesting 156.05 high. 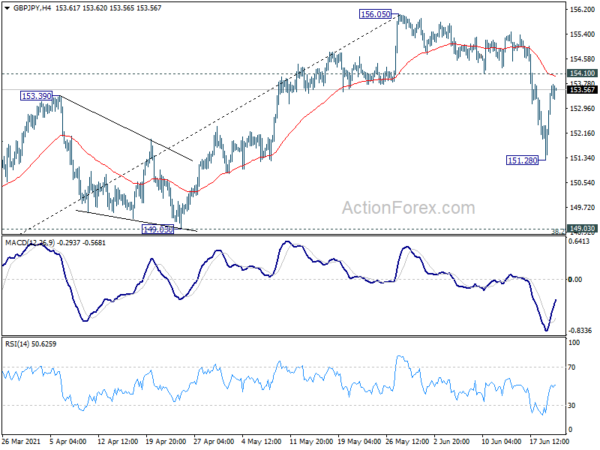 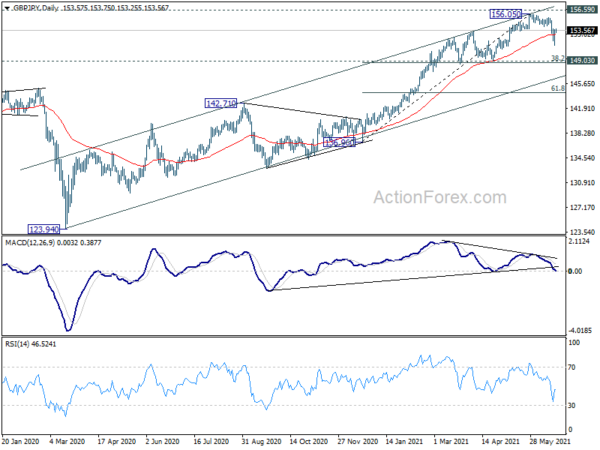