Euro is trading steadily in US session after ECB finally revealed it’s new forward guidance. Though, the common currency is notably weak against Sterling and commodity currencies. Meanwhile, Dollar and Swiss are also weak, together with Yen, as market sentiments are generally stable. We’d now see if US stocks could extend the strong rebounds in the past two days, to retest recently made record highs.

Technically, both EUR/USD and EUR/JPY are pressing 4 hour 55 EMA at this point. We’d see if the two pairs could stand firm above the EMAs to extend current recovery. Or, the would be dragged down by selloff in other crosses for retesting 1.1751 and 128.58 temporary lows.

US initial jobless claims rose to 419k, above expectation

ECB keeps interest rate unchanged today, with main refinancing rate, marginal lending facility rate, and deposit facility rate at 0.0)%, 0.25%, and -0.50% respectively. Net purchase under APP will continue at monthly pace of EUR 20B. The EUR 1850PEPP will continue “until at least the end of March 2022”. Purchase pace remain at “significantly higher pace” than during first months of the year.

Also, ECB now expects key interest rates to “remain at their present or lower levels until it sees inflation reaching two per cent well ahead of the end of its projection horizon and durably for the rest of the projection horizon, and it judges that realised progress in underlying inflation is sufficiently advanced to be consistent with inflation stabilising at two per cent over the medium term.” It added that this may also imply “a transitory period in which inflation is moderately above target.”

BoE Broadbent: The appropriate policy response to current inflation is nothing

BoE Deputy Governor Ben Broadbent said in a speech, “most of the overshoot relative to target in the latest CPI numbers… reflects unusually strong inflation in goods prices”. That would also be true of the “larger overshoot we’re going to see towards the end of this year”. “If this was only a story about global goods prices,” he added, then the appropriate policy response to the current inflation would be “nothing”.

Also, “while we know it’s going to go further over the next few months, I’m not convinced that the current inflation in retail goods prices should in and of itself mean higher inflation 18-24 months ahead, the horizon more relevant for monetary policy,” he added.

Australia goods exports rose to record 41.3B in Jun

Australia NAB business confidence dropped to 17 in Q2, but condition rose sharply to 32

According to Alan Oster, NAB Group Chief Economist “Business conditions were still in negative territory in Q3 2020, and now, three quarters later, they were at a record high, a testament to how rapid the recovery has been from last year’s recession”.

“A pleasing aspect of the survey is how broad-based the strength in conditions and confidence was – whether you look by industry or by state they are all above average, and in many cases well above.”

EUR/USD is still losing downside momentum, as displayed in 4 hour MACD. Nevertheless, further decline is expected with 1.1880 resistance intact. Current fall from from 1.2265, as the third leg of correction from 1.2348, would target 1.1703 support. On the upside, though, break of 1.1880 will indicate short term bottoming and turn bias back to the upside for stronger rebound to 1.1974 resistance first. 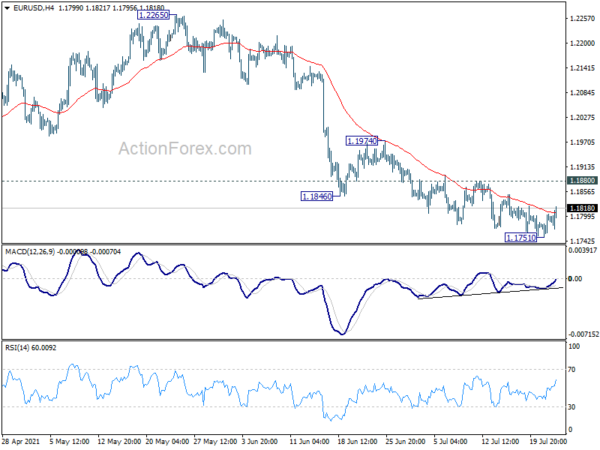 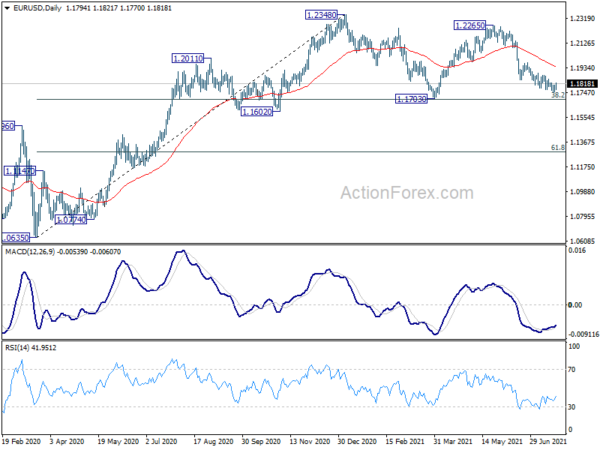