Dollar Trying to Recover ahead of FOMC, Market Sentiments Steady

Dollar is trying to recover in early US session but upside is limited so far. Overall market sentiments stabilized as US stocks might have regained footing for another take on new records. Also, traders are turning a little bit more cautious ahead of FOMC statement and press conference. Overall picture for the week is unchanged for now, as European majors and Yen are the better performers while commodity currencies are the weaker ones.

Technically, we’d pay much attention to Dollar pairs’ development to gauge the reaction to FOMC. For Dollar weakness, GBP/USD will need to break through 1.3908 resistance while EUR/USD should break 1.1880 resistance too. As for Dollar strength, USD/JPY will need to break 110.58 resistance while EUR/USD should break 1.1751 low. Gold is also a gauge as it needs to break through 1791.45 support firmly to indicate Dollar buying. 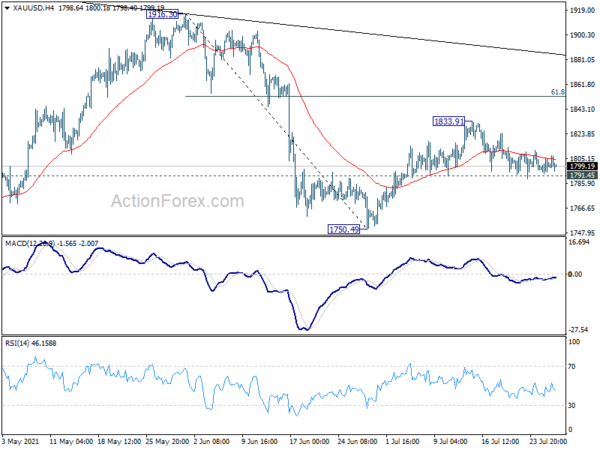 Fed to hold the cards of tapering to chest

FOMC is widely expected to keep monetary policy unchanged today. Without new economic projections, the focus will be on the policy statement and press conference. In particular, Fed Chari Jerome Powell would likely just reiterate that the Committee is in talks of QE tapering. Yet, it is premature to make any conclusion.

Also, more information about policy changes will be revealed at the Jackson Hole symposium in late August, followed by the September meeting. The formal announcement of tapering could indeed be made in December.

US goods trade deficit widened to USD -91.2B in Jun

Rolf Bürkl, a GfK consumer expert commented on this observation: “The phase where the decrease of COVID-19 incidence of infection has come to an end and those figures are again on the rise. In addition, the momentum for vaccination has recently slowed down considerably, despite there being sufficient quantities of the vaccine available. This is currently preventing any further significant increase as it pertains to consumer sentiment.”

Also released, Swiss ZEW expectation dropped to 42.8 in July, down from 51.3.

In the Summary of Opinions of July 15-16 meeting, BoJ noted that it should “continue to support financing, mainly of firms, and maintain stability in financial markets by conducting monetary easing through the three measures”

Even though core CPI is likely to increase on the back of rise in commodity prices, there is “a long way to go” to achieve target in a stable manner. Hence, it is “important not to tighten monetary policy prematurely”. Also, the “deflationary mindset is strongly entrenched in Japan”.

Head of Prices Statistics at the ABS, Michelle Marquardt said: “Rising fuel prices accounted for much of the increase in the June quarter CPI, with prices surpassing pre-pandemic levels”.

“The annual CPI movement was significantly influenced by COVID-19 related price changes from this time last year… These ‘base effects’ led to a sharp increase in the annual CPI movement”, she added. “In situations such as this, it is useful to consider underlying inflation measures such as the trimmed mean, which are designed to remove large, one-off price impacts”. 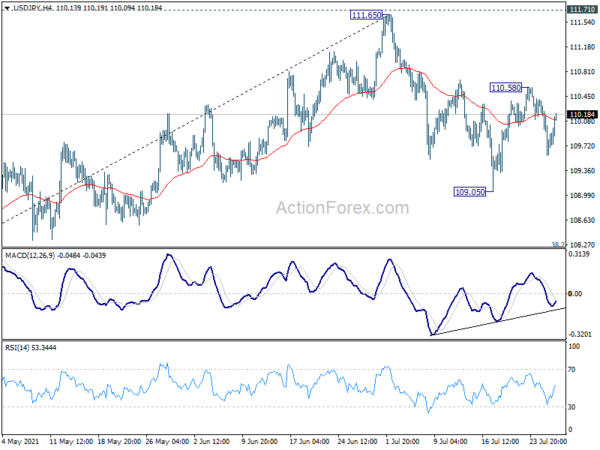 In the bigger picture, medium term outlook is staying neutral with 111.71 resistance intact. The pattern from 101.18 could still extend with another falling leg. Sustained trading below 55 day EMA will bring deeper fall to 107.47 support and below. For now, outlook won’t turn bullish as long as 111.71 resistance holds, even in case of strong rebound. 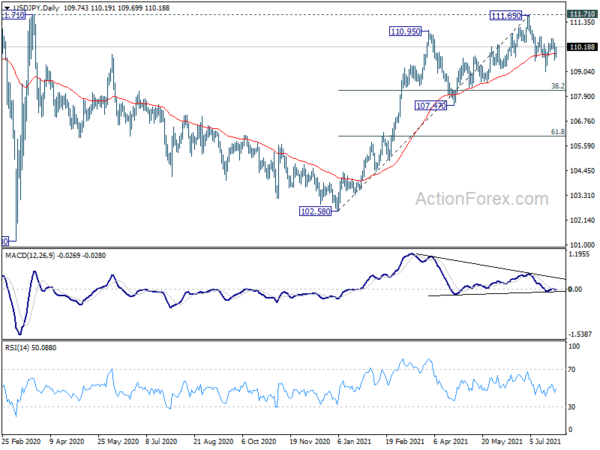