As Dollar is digesting this week’s yield supported rally today, selling focus is turning to Euro, in particular in crosses. Meanwhile, firmer overall risk sentiment is supporting commodity currencies and Sterling, with Aussie being the stronger one. Yen and Swiss Franc are generally softer on stable risk sentiment.

US initial jobless claims rose to 362k, above expectation

US Q2 GDP growth was finalized at 6.7% annualized, revised up from 6.6%. Upward revisions to personal consumption expenditures (PCE), exports, and private inventory investment were partly offset by an upward revision to imports, which are a subtraction in the calculation of GDP.

Eurozone unemployment rate dropped to 7.5% in Aug, EU dropped to 6.8%

Swiss KOF dropped to 110.6 in Sep, slowdown likely to continue in coming months

Swiss KOF Economic Barometer dropped from 113.5 to 110.6 in September, slightly above expectation of 110.3. That’s the fourth decline in a row. The index remains above its long-term average, but the slowing in recovery is “likely to continue in the coming months”.

KOF also said: “The recurring decline is primarily attributable to bundles of indicators concerning foreign demand. Indicators of the manufacturing sector send an additional negative signal, followed by indicators of the economic sector other services. By contrast, indicators from the finance and insurance sector are providing slightly positive impulses.”

Also from UK, current account deficit narrowed to GBP -8.6B in Q2.

BoJ Governor Haruhiko Kuroda reiterated in a speech that “consumption is expected to pick up if further progress in vaccinations allow society to curb infections, while resuming economic activity.”

“But the timing and pace of recovery in consumption remains highly uncertain and could change depending on how the pandemic unfolds,” he added.

“We will scrutinise the impact of the pandemic on the economy and take additional easing steps without hesitation if needed,” he pledged again.

The Ministry of Economy, Trade and Industry downgraded the assessment of industrial production, and said recovery “has paused. Nevertheless, based on a poll of manufacturers, production is expected to rise 0.2% mom in September and then 6.8% mom in October.

ANZ said: “The Auckland COVID outbreak drags on but businesses so far appear to be keeping their eyes on the prize. Spending has already bounced back quite a lot, particularly outside Auckland, and experience has shown momentum tends to recover quickly. In that context, interest rate increases may well prove more of a challenge. The housing market is vulnerable, with headwinds gathering, and there’s no question the housing market and construction more generally have been key drivers of growth over the past 18 months – for what’s definitely been a mix of better and worse.

Intraday bias in EUR/USD remains on the downside at this point. It’s now in a deeper correction to whole rise from 1.0634. Next target is 1.1289 medium term fibonacci level. On the upside, above 1.1667 minor resistance will turn intraday bias neutral and bring consolidations first. But risk will stay on the downside as long as 1.1908 resistance holds. 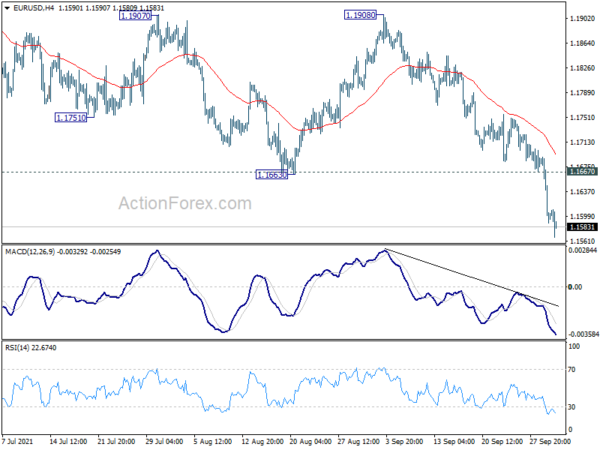 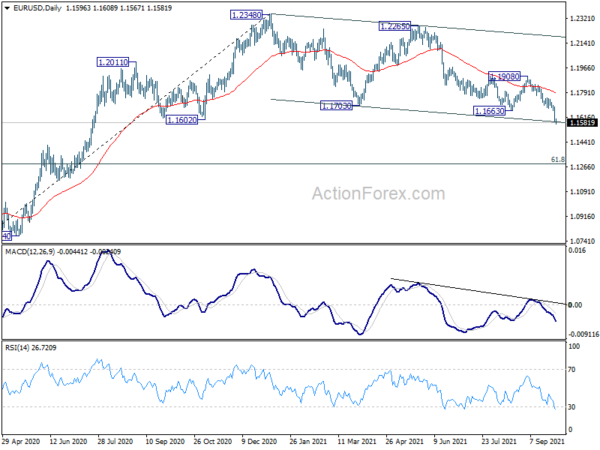